Corrupted Blood changed WoW and the world beyond it, and the Sawbones podcast talks about its influence on medicine

With WoW Classic dominating everything lately — here’s where I hysterically shout it’s coming out in August aaaargh — it’s an interesting bit of serendipity that Justin and Sydnee McElroy’s podcast Sawbones touched on the Corrupted Blood plague recently. For those of us who were playing back then, this is a classic moment in WoW — the Corrupted Blood plague was when Blizzard made a new raid and released it to live servers without realizing they’d accidentally made a viral epidemic possible. The result? Players ran from major cities like Orgrimmar and Ironforge and hide in the vast wildernesses of Azeroth in a vain hope to escape it.

So what happened? Well, since I was raiding Zul’Gurub at the time, I’ll give you what I remember. It was the release of Patch 1.7, the Rise of the Blood God. The big show stopper of the patch was Zul’Gurub, a 20-player raid meant to fill a different niche in raiding than the big 40 player raids like Onyxia, Molten Core or Blackwing Lair.

The last boss of the Zul’Gurub raid was Hakkar the Soulflayer. Blizzard had been building to the raid for a while — a great deal of the Strangletorn Vale and Swamp of Sorrows leveling led to mention of Hakkar, as did a questline from Feralas and Tanaris and even the Hinterlands. All of these quests and lore led up to Zul’Gurub, where the Zandalari (remember those guys? Whatever happened to them? Must not be that important) tasked Horde and Alliance players with storming the ancient Troll city and preventing Hakkar from unleashing his tainted blood on the world.

Anyway, into Zul’Gurub we went, and after fighting various priests who had been sent to stop Hakkar only to become his servants, we reached the pyramid at the center of the city and Hakkar himself.

One of the complications of fighting Hakkar was the Corrupted Blood debuff. I say complication, but it was a major part of the fight — the debuff took a chunk of your health off the top and then ticked away a sizable fraction every couple of seconds. By itself, this was mostly just something to keep the healers on their toes and drain their mana, but the real complication came when someone realized, either accidentally or on purpose, that Corrupted Blood would infect Hunter and Warlock pets.

Then they realized it would stay on Hunter and Warlock pets that had been dismissed. And would still be there, still infecting others, when you summoned the pet again out in the world. 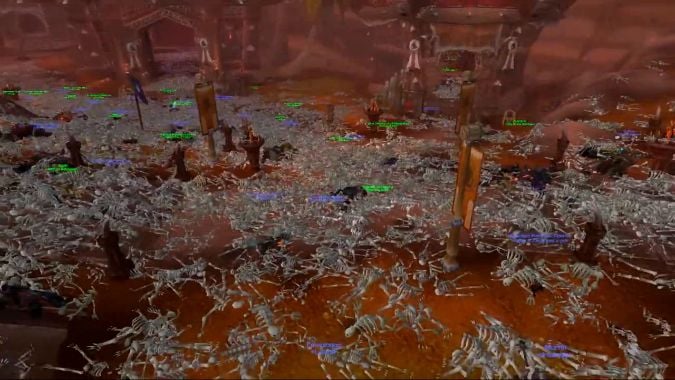 Once this realization occurred, someone got the bright idea of summoning their infected pet in a major city. Not only was Corrupted Blood infectious, spreading to anyone in range of it, it also spread to NPCs like Auctioneers and flight masters. They would get the plague, but they wouldn’t die from it — instead, they would spread it to anyone who came near them. Higher level characters with healing abilities could stay alive with Corrupted Blood, but it instantly killed anyone with less than a couple thousand health and would tick away the life of just about anyone who couldn’t heal through it. And nothing Blizzard did — from quarantines to server resets — could stop it until they finally put in a patch that rendered Hunter and Warlock pets unable to catch Corrupted Blood, which prevented them from bringing it to major population centers.

For a week, it was pandemonium on servers. People literally ran and hid from the big cities. The Auction House was utterly deserted because the Auctioneers were prime targets for Corrupted Blood because it didn’t kill them, but they’d spread it to any poor person who wanted to try and sell anything. Some players wanted to hide from it, some players actually set up small “clinics” offering to heal people who had it — it was a Shadow damage effect and wasn’t dispellable — and others, like the aforementioned Hunters and Warlocks with infected pets but also a lot of players who just happened to get it, tried to spread it and cause mayhem.

Corrupted Blood even saw some use by researchers as a model for how real diseases can affect human behavior.

The legacy of Corrupted Blood

Now, you don’t have to worry about Corrupted Blood when WoW Classic goes live, because first off Zul’Gurub won’t be live immediately at launch, and also because patch 1.8 rendered Hunter and Warlock pets immune to it so it could no longer be spread by them. Since players with Corrupted Blood can’t leave the instance with it, there’s no way for it to spread on Wow Classic servers.

I just find it interesting that Sawbones brought it up after all these years. You can head over and hear them discuss it here, and if you’re an old timer like me, you remember what you did when the Corrupted Blood hit. In my case, I was playing a Warrior, so I just avoided cities. The Corrupted Blood basically influenced WoW for years — the Zombie Infestation that heralded Wrath of the Lich King was definitely inspired by Corrupted Blood, for example.

It was also a pretty amazing way to be reminded that even in a world as tightly controlled as Azeroth, things can go wrong in ways no one is expecting. In a weird way, this unanticipated error in how the game handled a debuff changed the game, and the player base, forever. The CDC even used it to model actual real world diseases and how people react to them, and as recently as January 13 of 2017 players were spreading the debuff Burn out of Sunwell Plateau in the same way. It’s a crazy but true aspect of World of Warcraft‘s original years, that we’ve learned that some players will always try something like this.