The Queue: When will my reflection show 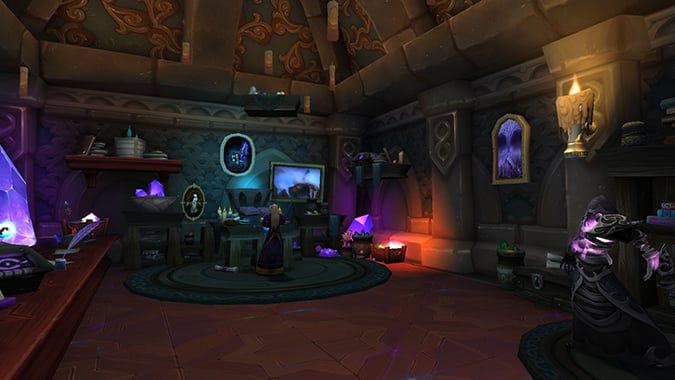 I was pondering my extended and lengthy existence in World of Warcraft this week, and you know what’s missing? Mirrors. Even in the fanciest of fancy places, I cannot recall ever seeing a functioning mirror anywhere in Azeroth or beyond. Ever try standing in front of the mirrors in the barber shops? You won’t see anything reflected in them. They aren’t even in places like…I don’t know, tailoring shops or transmog shops where you’d expect to see a mirror. None of my characters have ever actually seen their own reflection.

You know what this means, right?

I was doing the weekly Ice Crown run for the mount that never drops, and while I usually zone out during the final fight banter, Tirion’s line “Light, grant me one final blessing” caught my attention this time. Did the Light take “final” as literal, and is that why the Light didn’t protect him on the Broken Shore?

That’s been a running theory ever since Legion released, but I don’t think I really subscribe to that one. The Light isn’t really a being or a creature that listens and responds to the pleas of mortals — it’s just…energy. Life energy, the energy that suffused the cosmos at the dawn of time. Creatures are able to tap into that life force, but it’s not like talking to the elements, which have definitive physical forms and motivations. The elements have to want to help you — but with the Light, you have to want it to help you, and open yourself up to it.

Tirion asked for one final blessing because he fully expected to die up there on Icecrown. He was the one who stepped forward after the Lich King’s defeat and was going to put that helm on his head — he knew what it meant. He knew what he was sacrificing for it, and he was willing to do that, for Azeroth. He did not know that Bolvar was waiting up there to do precisely the same thing. To Tirion, it would have been one final blessing, because after he donned the Lich King’s helm, he knew the Light wouldn’t be an option again.

The Light didn’t protect him on the Broken Shore because at that point in time, the Burning Legion was just that powerful. We were witnessing an invasion at the height of its power, and that was meant to be that frightening moment where we realized even the Light couldn’t help us. It was on, it was serious, and we were in for a fight that was going to be tougher than anything we’d ever faced before — including the Lich King.

QftQ: Anne, I noticed you’re eagerly anticipating the remake of Link’s Awakening on the Nintendo Switch, which comes out the day after your birthday (as per your tweet). Was that your first Zelda game and are you a huge Zelda fan?

It wasn’t my first Zelda game — I have foggy memories of the original Zelda, but the one that really made me fall in love with the series was A Link to the Past. I have a lot of fond memories of playing that one (or watching my brother or sister play it, we took turns) while my mother watched us play — and begged us to slow down on the text screens because she wasn’t a speed reader like the rest of us.

Link’s Awakening was different, though. My brother had a Game Boy that he left behind when he joined the military, so I uh….’borrowed’ it, along with his copy of Link’s Awakening, and played the heck out of the thing. That was during a particularly dark and melancholy part of my life, and it was one of the bright moments in it. My brother was gone, I had no idea when or even if he’d come back, but I had his silly little Game Boy and this silly little game to play to remember him.

And it was honestly one of the first games I played that hit me on a really emotional level. The ending was sweet but incredibly poignant — and I didn’t lose any lives during the game, so I got the little extra tidbit at the end. I’m trying very hard not to spoil anything, just because it’s a very old game, and if people haven’t played it, I’d like them to experience it the same way I did.

I wouldn’t say I’m a huge Zelda fan, but I thoroughly enjoy the games I get a chance to play (I missed out on pretty much everything between Awakening and A Link Between Worlds due to lack of consoles). Awakening is just a sweet memory that I’m really looking forward to revisiting, when it comes out.

Do you think Blizz will change it’s pricing or business design facing the Xbox monthly service, Stadia, and all other sorts of new sub services coming up that are seemingly cheaper?

I don’t think so, not unless they take a severe financial hit somewhere along the way. The current model has been in place for a long time, it’s not broken, and they’re still making money, so why fiddle with something that’s working just fine? If the market as a whole starts drifting in that direction, I imagine they’d take a good look at where it’s going and whether or not it’d be a viable move, but until then, I suspect they’re just going to keep on going the way they’ve always been going.

Q4Anne: if Blizzard allowed you to roll characters that are half-races, combining two of the currently playable races, what would you play (if any)?

And what if you had the option to take any race from the Warcraft Universe, playable or not?

I don’t really think I’d play a half-race, that just feels…a little weird to me? I know there are a lot of people out there that would love to play half-elves or half-trolls or half-whatever-strikes-their-fancy, but that never really struck me as an entertaining option, personally. That’s just my opinion, though!

I think if any race were available…I’d actually like to see the Dark Trolls make a return. Not necessarily because I want to play one mind you (which I know was the focus of the original question, but bear with me), but because they’re that missing link between Trolls and Night Elves. Learning about their history, who they were, why they chose to become what they became — all of their history is from a pretty important but vague part of Azeroth’s history.

Mind you, in order to do this we’d have to go back in time or something, because I’m pretty sure they don’t exist anymore. Maybe a full fledged Caverns of Time expansion?

Q4tQ: What are you most looking forward to coming from WC3: Reforged, even if you don’t plan on getting/playing it? It has to be the Arthas vs Illidan cinematic right?

All of the cinematics. Especially anything involving Medivh — I love Medivh! I’m not the most amazing RTS player in the world, so I don’t know if I’ll actually get into the game. But I’m hoping we’ll see playthroughs on Twitch and YouTube, because the story in Warcraft 3 is really what kicked off almost everything we see today in World of Warcraft. I know they’re going to tweak parts of the story here and there to better reflect where the story has gone, and I kind of want to see that in action as well.

Hooooold up. I can only take certain Shado-Pan peeps with me on certain quests? So to complete my achievement I have to just wait around until those quests show up 15 times? That is super lame.

I’m assuming you’re talking about the Getting Around with the Shado-Pan achievement — and yes, that’s exactly how it works. At the time, it was a pain but not too much of a pain because everyone was completing the dailies for Shado-Pan rep anyway. These days, it’s utterly annoying because the order in which everyone pops up is completely random. If it’s any consolation, I didn’t actually complete that achievement myself until earlier this expansion — so you aren’t the only one slogging away at the thing. I really wish they’d put the dailies on a rotating schedule, though, so that the process would be a little less of a hindrance.