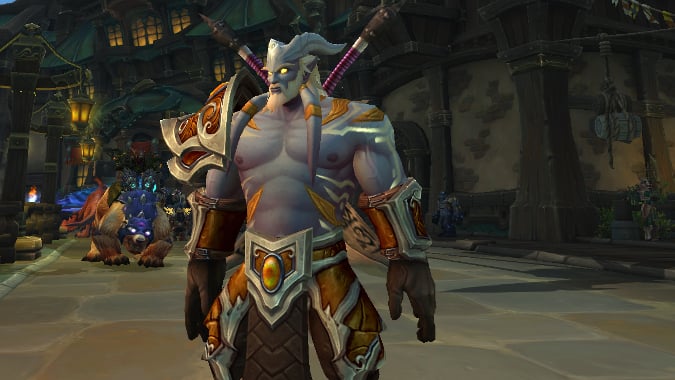 The only way I could be happier with transmog in WoW right now is if they let me mog Fist Weapons over 2h Weapons.

This is the Queue. Let’s go.

STEWART TOLHURST HAS A QUESTION ABOUT SYLVANAS

Q4tQ Is one of the reasons Sylvanas is so bitter and twisted because she wants the things her sisters have/had but Arthas took any possibility of that away from her? A Human partner and half elf children would have been the fate of all three sisters if Arthas hadn’t fallen to darkness…

I don’t think it’s specifically that. It’s more that what she experienced was, essentially, the ultimate violation. She didn’t merely die, she was murdered at the gates of her home after being betrayed by one of her own, and then even an honorable death protecting her people was stolen from her — she was forced to be a servant to the very being that had chosen to invade her homeland and murder her own people and then used as a pawn and tool of his further conquests because he was angry that she dared to fight back against him.  Even when she regained control of herself and reclaimed her body, it was dead — everything she was, everything she’d ever been was gone and in its place she knew only suffering.

What are we if not slaves to this torment?

Sylvanas isn’t mad because she doesn’t have a boyfriend or babies. She’s furious because she was forced to go through a trauma on a scale we can barely comprehend and had all the characteristics of being a living being twisted into what she is now. Does she have emotions? Clearly she does, but in War Crimes she describes the sensation of seeing her sister again almost as if she had a phantom limb that was suddenly twitching again — even emotions like love are warped as they’re forced through the being she is now, one that suffers constantly from its undead state.

But we see that she can be happy. Again, in War Crimes, we see that she is happy, anxious, lonely, and even loving towards her sister. She is not the same as she was, when she was alive — it’s doubtful she would be even if she somehow was returned to life, because she’s experienced so much horror. But even dead, she does feel. Sylvanas is a more complex person than her undeath, or any motivations as simple as envy for a life she no longer leads. She’s still responsible for her actions, make no mistake, but her entire being is shot through by a trauma she experienced that transcends what most of us can possibly understand.

I could spend all day talking about this, but we have other questions to discuss. Let us put it this way — Sylvanas has many reasons to be bitter.

While questing in Nazjatar, there are quests that are a blue ! instead of a yellow one. My wife and I had different quests, where she’d say “Here’s a quest giver,” when I didn’t see one, or I’d say, “There’s a quest here,” and she didn’t have it.
I THINK that all these quests gave XP to the follower. So my assumption is that we have different followers, and different followers have different quests available. Am I correct?
Also, why would they do this? It really hurts group questing. Also, the quests don’t really seem to be meaningful to the follower. I took blademaster Okani, because I liked the title. I had a quest to pick up berries from the ground and make wine, which my wife didn’t have. So…what does blademaster have to do with wine?

You’re correct that your choice of follower will affect which follower quests you can get.

And considering the Blademaster’s entire people are essentially already extinct, just waiting for the current generation to die? I could see them wanting some wine.

Q4TQ: how likely do you think it is that WoW goes back to the four factions that we had in Warcraft III (Alliance, Horde, Night Elves, Undead) by the end of BfA? How do you see it happening / how would you do it?

Considering that Alex Afrasiabi himself was talking about making it easier for people to play together instead of harder at last year’s BlizzCon? I do not find it very likely at all that we’ll see four factions ala Warcraft 3. My selection for most likely to least likely outcome for the Faction Divide are as follows:

I am completely willing to accept that I could be entirely wrong, but this is what I think we’ll see by the end of BFA/beginning of whatever’s next, in order of likelihood. If I had to bet, I’d bet on #1.

I must admit Azshara narrating WQ’s is amusing to say the very least!

KALCHEUS IS NOT ASKING A QUESTION

Not a Q4tQ: So was Jaina able to raise the flagship from underwater because she was the true Lord Admiral?

Well, you’re not asking, but what the heck — no, she was able to raise the boat because she’s Jaina freaking Proudmoore and she’s just that powerful. Now, consider that neither Jaina freaking Proudmoore nor First Arcanist Thalyssra could teleport out of Nazjatar when Azshara decided they shouldn’t be able to do so, and it took the Heart of Azeroth itself for either of them to open a portal using the old ley line network that Azshara almost certainly knew they had access to when they opened portals back to their respective capitals.

Not only is Azshara more powerful than the former head of the Kirin Tor (a mage who was so powerful she slapped around an Archmage of the Council of Six, Aethas Sunreaver, like he was a child) or the heir to all 10,000 years of Nightborne arcane knowledge, she’s powerful enough to balk them while giving a catty speech. 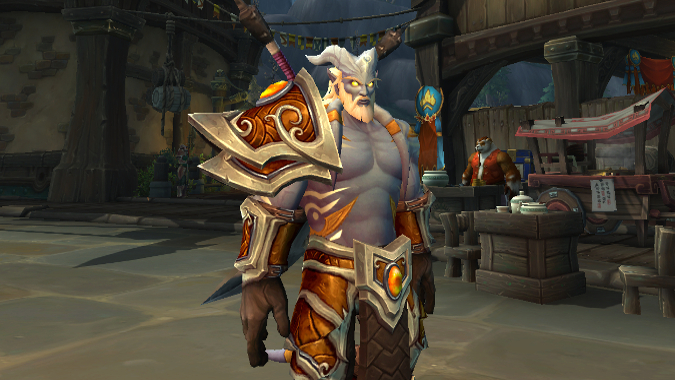 I sincerely love the new transmog system changes so, so much. I can’t believe that there were so many questions about Factions and almost none about transmog.

I’m honestly a little concerned that my female characters got a bit of a raw deal here, since they can’t go the full bare chested route without a really difficult to match undergarment visible. There are enough breastplates I can work with that I’m not entirely unhappy that my main’s a lady Night Elf, but I’m definitely playing my Lightforged a lot more now.