Off-Topic: Why Dragon Age 2 is still the best of the series 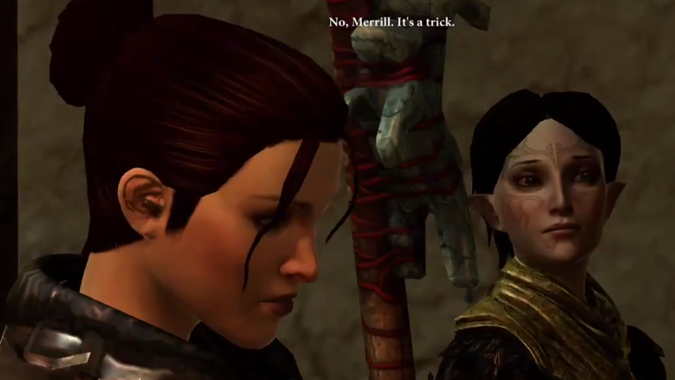 I’m a fan of every single game in the Dragon Age series, for different reasons. I like Origins for being where it started, for Claudia Black’s performance as Morrigan and Kate Mulgrew’s performance as Flemeth, and for a really solid game with tons of gameplay that lasted me hours and hours. Plus I got to kill Arl Rendon Howe, and that’s pretty awesome. Inquisition is a really excellent game, I love the storyline and the characters and the way it expands the setting, gives us a chance to really see Orlais and Ferelden in ways we hadn’t gotten to see them before in the world of Thedas. Playing the Inquisitor, I had a lot of fun switching between various archetypes, getting to play as a Qunari for the first time in the series.

But the best game — the most engaging, the one that caused me to obsess over it, the one that at times hurt me deeply, made me helpless with laughter, outraged me and made me roll my eyes was the second game in the series.

Dragon Age 2 is my favorite of the series, and it’s not that I think the game is perfect. Yes, that one cave is reused a lot. Yes, the third act feels really truncated, which is why I always wait to do the DLC until I reach the third act. I will go to my grave thinking that the Legacy DLC that introduced Corypheus — the villain of Dragon Age Inquisition — was intended to be part of the third act of the game from the start, since it fits there so naturally and it explains why everything in Kirkwall got so bad between Templars and Mages. 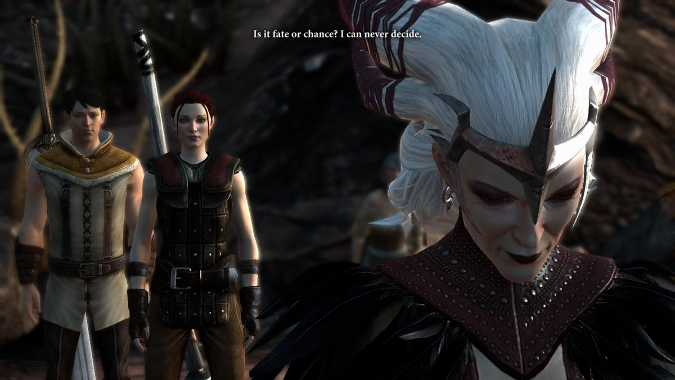 A Game of Mortals

But the fact that I’m willing to sit here and spend so much time seven years later musing about the storyline of Dragon Age 2 and how the Legacy DLC makes Act 3 make perfect sense tells you just how involved I ended up in the story of Hawke and her family. Even now, years later, it’s Dragon Age 2 I most often replay. It’s Dragon Age 2 that I will deliberately take characters I haven’t previously combined in my party, just to see what they say to each other. It’s Dragon Age 2 that has me deliberately running from place to place, trying to trigger party conversations just to sit back and listen to how Aveline and Isabela bicker, or to watch Isabela’s warm regard for Merrill, or even to hear Merrill explain to Anders that she at least always knew that spirits were dangerous and she was sorry that he didn’t understand that. The characters have lives and opinions outside of their relationship to Hawke, and that’s something that even Inquisition didn’t do as well as Dragon Age 2 did.

I understand why Inquisition went back to the protagonist as a cipher, letting you pick their race, gender, class and build them from the ground up. But I honestly think that Hawke was the best protagonist the Dragon Age games ever had, because whoever your Hawke is, they’re just a person — their greatness is achieved. The Warden has a terrible burden thrust upon them, and is expected to rise to meet it — surviving the Grey Warden initiation makes you something other than a normal man or woman. The Inquisitor is caught up in events that force a power from before the Veil existed to bind to their very being.

Hawke doesn’t have any of that, and yet, the decisions that Hawke makes change the world of Thedas forever. And I think it’s important that Hawke comes from not just humble, but outright oppressed beginnings — fleeing for life alongside their family, they make the long trip to Kirkwall to become refugees living in the slums and looked down upon by the people of Kirkwall. In the modern world, seeing a reviled immigrant escape oppression and endure hatred and casual bigotry has added resonance. 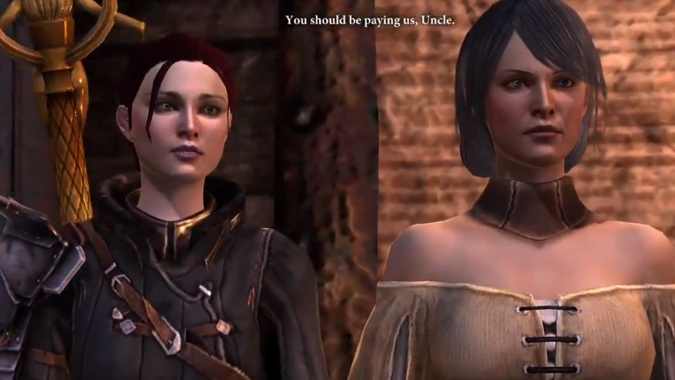 Narrowing the scope increases the focus

I mean, even people that respect you and want to hire you talk about how stupid and worthless people from Ferelden are to your face. They hate them for a variety of reasons — because they’re coming to take their jobs, because they have different customs and ways of life, because they’re poor (which is what happens when you lose everything and have to flee for your lives, after all) and you routinely see the sentiment that people from Ferelden should be put back on boats and sent back even while the Blight is raging. Sure, it would be a death sentence, but better that than let Fereldens come live in Kirkwall. At least that seems to be the attitude, and it makes the game a distinctly different experience to play in 2019 — in many ways it feels like a game made by prophecy, when in fact it’s simply that the writers had enough of an understanding of human nature and history to know this kind of tribalism is deeply rooted in us. It feels valid and true because we’ve seen it so many times before.

Dragon Age 2 is not afraid to hurt you. It will show you those dearest to Hawke suffer, and sometimes, they suffer because of Hawke — because Hawke didn’t take a threat seriously, or didn’t act in time. The game asks hard questions — what cost is too great for freedom, where is the line between preventing chaos and causing suffering — but it doesn’t always answer them. It’s fully cognizant that it is a fantasy RPG in a very Western setting — it cribs heavily and equally from Glen Cook, Robert E. Howard, C.L. Moore and Fritz Leiber to name just a few, with of course a vein of T0lkien and the history of the genre throughout, but it dares to really think about the concepts it’s creating. It’s telling that alone of the three games, Dragon Age 2 doesn’t focus on some overarching force that threatens to doom the world. Such forces exist in the setting — the Blight, the Darkspawn, Corypheus, the Mage/Templar conflict, Demons and walking corpses — but all of these threats are treated more like hazards rather than world-ending catastrophes. Hawke is out for whatever Hawke can get, and it’s a far more human perspective that keeps the game about people, not monsters or dragons or a distant god and martyred prophetess.

Plus, some of these people are funny. Some are sarcastic, cutting, and outright jerks to each other. One of my favorite pairings is Sebastian, the deeply religious yet slightly murderous son of an assassinated family, and Varric, the sarcastic Dwarf. Both are younger brothers in powerful families who never expected to find themselves thrust into a leadership position, yet what they have in common doesn’t keep Varric from just plain not liking Sebastian. They just plain don’t get along, and hearing Varric say You want to touch Bianca’s cocking ring is the best out of context moment of inter-party dialog. The sheer disdain that Brian Bloom put in his performance there is breathtaking. 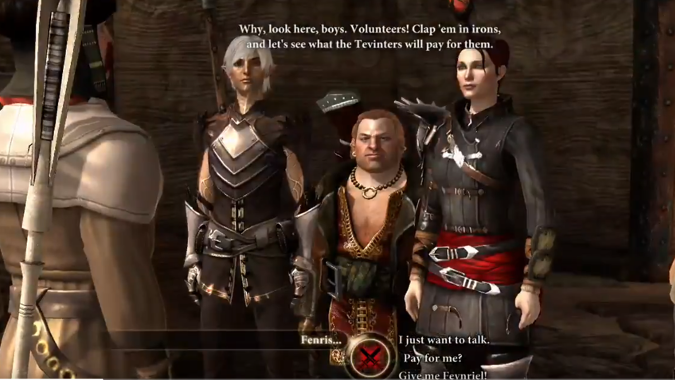 To be the ants that the boots crush

That is why I love Dragon Age 2. I love it because it understands that all that fantastic, impossible stuff is there to set up human stories — stories of loss, pain, love, hate, and the fury and mire of the heart in conflict with itself. There are still larger than life conflicts and threats, but it’s less about those conflicts and threats, and more about how they affect the people who live through them. Anders, a character introduced in the Dragon Age: Origins expansion pack Awakenings goes from a deliberately selfish individual who only cares about himself to a firebrand who cares deeply about the liberation of others before his desire for freedom for himself and others turns him into a monster. Varric is a sharp, savvy, self-motivated operator but his family and his friendships ultimately drag him into situations he can’t BS his way out of. Isabela tries to care only about what’s best for her, and her fate is largely dependent on how others treat her, on the choices she makes because of it. It is in watching these characters and seeing them interact and feeling their pain and grief and anger and loss and even the good times that Dragon Age 2 finds itself.

I love it because Hawke is just a person, and all of Hawke’s friends and rivals are just people. And the game shows us these people, caught in the eddies of impossibly huge events, trying to make the best of them — trying to adjust to new lives, make new homes, protect their friends and loved ones. Trying to cope with impossibly huge events and sometimes failing. Dragon Age 2 shows ten or so years in the lives of these characters, and the fact that it does so in a way that has brought me back time and again makes it my favorite of the series.

And yeah, they really needed more variety on the caves. No one’s disputing that.