The Queue: This was going to be written earlier… 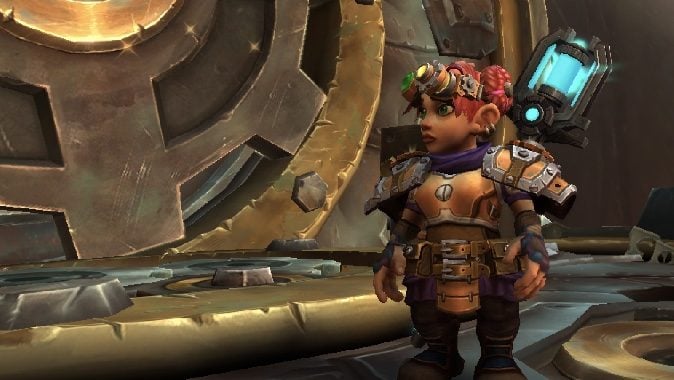 Every week I have the grand plan to finish the Queue in the evening and go to bed at a reasonable hour, and every Queue I fail.

Q4tLiz: It’s been a week. Did you finally get your heritage armor? How did you enjoy the quests? I like that they went to the effort of actually voicing the gnomes and not having them all sound “cutesy”

I did get my heritage armor, but I’d kind of hoped for more from the quest. Sure, it was a neat story of Gnome heroics and gave us a range of characters, but I had hoped for some Gnome story advancement, which we didn’t get. I may have had my expectations set a little too high — it was a fun story.

While Goblins and Gnomes are certainly both tinkerers, their styles are still very different — and I think you only need to look at Gnomish and Goblin engineering to see that difference. Gnomes make ridiculous gadgets, like their “ultrasafe” teleporters and battle chickens. They are gadget-makers, and there’s a certain precision to their creations (even when they fail spectacularly). I mean, just imagine the effort that goes into crafting the parts to a mechanical chicken and fitting them together to create a moving, squawking, kind of living thing.

Their armor expresses that aspect of their craft. The shoulders and goggles both have a number of tiny moving gears that must have been very carefully fitted to work together just so. It’s almost certainly an overcomplicated contraption as I have absolutely no idea what any of those gears do, but it’s very Gnomish.

The color scheme clearly comes from the Gnomeregan tabard. The armor has the same purple and bronze color scheme, with matching clockwork styling.

So let’s turn our attention to Goblins. Their engineering style aims more towards intentional explosions. There are a lot of bombs and fire, and precise clockwork and careful lines don’t make sense in that context. I absolutely expect some of their trademark big red rockets to make an appearance on their armor somewhere.

This idea follows along with their tabard, which is black and brown with an exploding bomb in the center. I’d expect their armor to follow a similar muted color scheme and feature the same explosive flair their engineering projects highlight.

But we can also look at the style of some famed Goblins. Gallywix wears a very stand out set of armor in Battle for Dazar’alor. There are some mechanical elements — like the precisely fitted joints in the arms and legs — that may have some slight suggestions of Gnomish design, but the armor is clearly a Goblin creation.

No matter how much Gallywix likes to brag about style, this armor is function over form. The Goblins have put it together to work, not to look good. For example, the shield is chunky and sturdy, but it’s not actually square: the edges are uneven and the plates holding it together are bolted on at odd, random angles.

Their heritage armor has to highlight their practical nature, so it will probably be rougher around the edges, with embellishments that are more likely to explode on command than to spin in circles for no apparent reason.

Migas all the way.

QfLiz: I saw a guide how to make different Disney characters in D&D. If you’d had this before the Blizzard Watch D&D sessions, would you have made a Disney character to play? If so, which one?

Hmm… I already play a nerd bard in one D&D game I’m in, who could be considered a Belle counterpart. Though she recently took a level in warlock, so I’m not sure where that puts her.

My actual Blizzard Watch D&D character is a Water Genasi sorcerer, so… kind of Ariel? Or kind of Ursula. (She’s not very nice, so probably a little more like Ursula. But she’s also not interested in overthrowing any kingdoms.)

Honestly, I kind of like making original characters in D&D. Taking inspiration from other sources is fun, but they seem to take on a life of their own once you create them, and that’s kind of exciting.

I think I have to go with my very first Gnome class: a Warlock. You are the most adorable wielder of dark magic Azeroth has ever seen, intent on devouring the souls of your enemies, all while bouncing around with pink hair and pigtails.

Q4Q: Do you welcome the return of quests in Hearthstone?
Especially with the addition of Dungeon Run-like passive abilities?

I’m not a fan of quests. Back in Un’goro, quests seemed so powerful that whoever finished theirs first won the game. And some classes were really good at finishing their quests, and as soon as that quest card came down it felt like you didn’t have a chance at all.

Some of the quest cards we’ve seen so far feel similarly powerful. For example, Untapped Potential, which requires a Druid to go four turns with unspent mana. That seems relatively easy to do, particularly with how adept Druids are at gaining mana. If you complete the quest, then Druid spells for the rest of the game get both of their “choose one” effects, which will be devastating.

When can I write the queue?

Are… are you trying to kick me out??

Well, you can’t kick me out because I’m leaving! Hmph!

(See you next week, probably, when our next great power struggle can begin.)