The Queue: When all is said and done 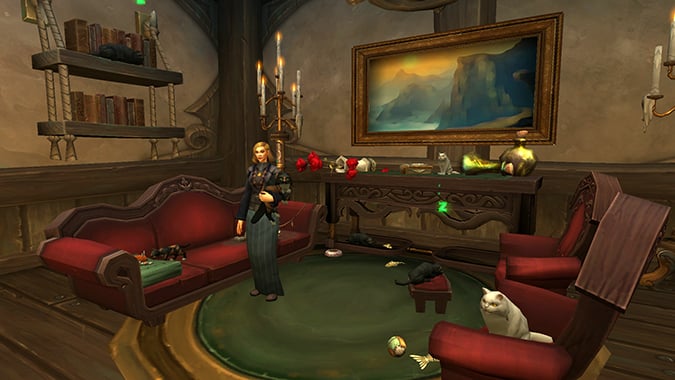 What is your character going to do when the world is saved and there are no more battles to fight? Mine’s going to join the legion of Azeroth cat ladies. I’ve decided this. It’s a done deal. World’s saved, we’re good, it’s kitty central for my character, and nobody is going to stop her.

Let’s get to your questions!

Q4tQ: So what’s up with Gazlowe? I remember him from Warcraft III helping to build Orgrimmar, so he’s always been good pals with the Horde, but I thought he was supposed to be officially neutral. I haven’t followed stuff with him before this expansion, but he suddenly seems to be acting like an actual member of the Horde, not just someone hired for jobs. He even talks trash about the Alliance in the Island Expeditions when he shows up. Not that I mind, I just feel like I missed something important with him.

You’re right, Gazlowe did help build Orgrimmar — he was also the Chief Engineer of the Horde engineering works in Durotar at the time. It was kind of a temporary, contracted position. But the thing is, Thrall paid well, which means…well, everything to a Goblin, so when the work was completed, Gazlowe decided to establish Ratchet over in the Barrens, just to stay relatively nearby.

As part of the Steamwheedle Cartel, Ratchet is a neutral port town, and Gazlowe is technically neutral himself. He doesn’t necessarily hate the Alliance — their gold is as good as anyone’s really — but he leans more towards the Horde, because of those previous business relationships. And this quasi-allegiance was further fueled in Cataclysm when an Alliance Rear Admiral wanted to basically halt the Horde from using Ratchet at all. It wasn’t a matter of faction loyalty, it was a matter of profits — and with that move, the Alliance would essentially be cutting off half of Gazlowe’s earnings.

Now that, that’s a reason for a Goblin to get downright annoyed.

Basically, Gazlowe hasn’t really signed on for the Horde or anything. It’s just a matter of personal preference. He’s always had good business relationships with the Horde, they pay him well, and they’ve never really tried to mess with his profits. He’s not a member of the Bilgewater Cartel, so technically he doesn’t report to Gallywix, and he isn’t a part of the Horde proper. He just goes where the gold is, and for a very long time, that’s been with the Horde.

Q4tQ: What’s your favourite boss fight mechanic/gimmick (doesn’t have to be from a Blizzard game)?

I really, really love cutscene moments in raids — those points where there’s a big transition with a lot of dialogue, and something crazy happens. My first recollection of this was in the Kael’thas fight in Burning Crusade. The long monologue and that spectacular moment when the windows shattered and gravity went haywire was just really cool. Blizzard followed that up with Yogg-Saron, which I loved to bits, and then the Lich King encounter had several of those transitions, including a stint where raid members got sucked up into Frostmourne.

I think part of the reason I love these moments so much is pretty firmly embedded in my love of old-school RPG games, particularly the myriad Final Fantasy titles out there. More often than not, final encounters started out crazy difficult, and just when you thought you had everything under control, there’d be some kind of insane morphing sequence or transition and the madness would start all over again. It just made those really big boss battles stand out from other major fights in a meaningful way, and amped the scope of the encounter to epic proportions.

Q4tQ: is it possible that Aszhara is trying to “Arthas” us? That she’s drawing Alliance and Horde to Naz in order to kill us, and raise us as a Naga army so that she can fight N’Zoth and break free of his domination?

That’s highly doubtful. Azshara can’t really create naga on the same level that the Lich King could raise the dead. That was all N’Zoth’s doing. So if anyone were to pull that kind of moment, it would be N’Zoth, not Azshara.

I do, however, feel like Azshara is playing us, and not necessarily for the reasons we’d initially suspect. The raid isn’t out yet, so I don’t really want to throw any spoilers out there, but she definitely has some pretty compelling stated reasons for bringing us all together. Whether or not those stated reasons are the truth…well, they might be, in some possible futures. Then again, she might be playing her own game with the Old Gods, and we’re just pieces on a chess board.

Q4tQ: what are the chances Medivh will show up at the end of this xpac or the beginning of the next?

I think Medivh’s story is either a: Done at this point, and Khadgar is his “official” successor, or b: On temporary hold until a good enough reason for him to stick his nose back into things. Originally, Medivh’s motivations were all tied into the Burning Legion. He was a pawn of Sargeras, set up from the moment of his conception and destined to carry out Sargeras’ plans whether willing or no. That’s why he opened the Dark Portal, and why the Orcs are on Azeroth to begin with.

In Warcraft 3, Medivh is trying to warn the world of the Legion’s return. As the Prophet, he warns and guides several groups together — both Alliance and Horde — and tells them they need to work together to prevent the Legion from completing its plans and basically wrecking the world. Part of it was, yes, a wish to save the world — but part of it was Medivh trying to make up for what he’d done while he was under Sargeras’ control. He was trying to redeem himself,  in the only way he knew how.

And I suspect that by making the Alliance and Horde work together, he was trying to foster the best out of the situation he’d been forced to engineer in the first place. Had the Horde and Alliance continued coexisting peacefully, side by side, that diplomacy would’ve represented a peaceful resolution to the war Sargeras essentially forced him to bring to the world.

We see him pop up again in Legion because again, the Burning Legion and its downfall was pretty much Medivh’s primary concern. Now that the Legion’s been taken care of, I don’t really think Medivh has as much of a vested interest in what’s going on. Khadgar is the Guardian now, whether he likes it or not — and the world’s troubles are his problem now.

Another QFTQ but I’m wondering… do you think the WoW Token had an effect on “black market” gold sellers?

I think the token did an amazing job at squelching the perceived need for gold sellers in WoW. Why hand your cash over to someone that could potentially rip you off and leave you with nothing? Blizzard isn’t going to help you if you get ripped off by a gold seller, that was your fault for being dumb enough to seek one of those guys out in the first place.

But if you have a problem or a technical issue with the token, Blizzard will happily step in and resolve whatever issues you might have had. Sure, the amount of gold you’ll get for a token fluctuates over time, but so does the gold market. You always know exactly how much you’re getting, the cash price never changes, and if you really feel it’s necessary to purchase gold for yourself, there’s a completely legit way to do it.

Question for the Queue: If you could add one toy to game what would it be? I would add a wormhole encyclopedia toy for engineers. So one action bar spot can be used but you get every wormhole. Clicking it could expand button like how all hunter pet related skills like revive, feed, etc can take one action bar slot.

Okay look — I know we already have Demon Hunters in the game. But I would still like to see a toy that would grant double-jump to all characters, even if on a temporary basis with a cooldown. This isn’t necessarily because I think there’d be some kind of value in such a thing, it’s mostly because double-jumping in Wildstar was super fun, and I think everyone should experience that joy.

Alternatively, I’d like a toy that turns our characters into kitties. Maybe make it a little hidden, like you have to /pet every cat in the Crazy Cat Lady’s shop, and then she sends you an overly enthusiastic letter about how she noticed that you, like she, just seem to love cats so much, that she thought you’d especially enjoy being a cat.

With a P.S. that asks you to please come visit again when you are a cat.