The Queue: Next Week 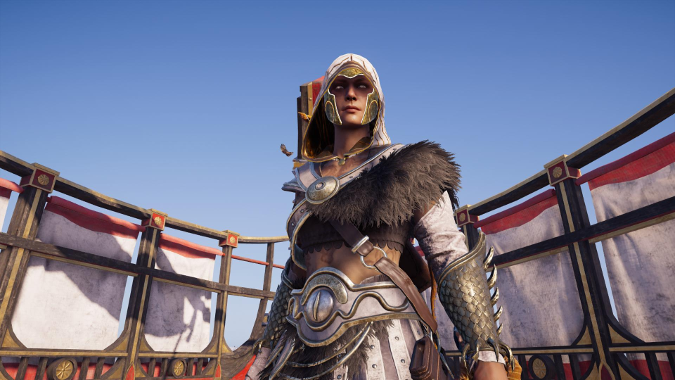 Okay, so right now I’m playing World of Warcraft, I’m also playing Diablo 3, and I started a Dragon Age Inquisition playthrough last weekend. And also, the last chapter of the Fate of Atlantis DLC for Assassin’s Creed Odyssey is coming out next Tuesday.

I have no idea how I’m gonna play all this.

Q4tRossi: What culture should be the basis of human heritage armor? Let’s assume that, for once. It won’t be some variation of blue/gold trim/lions (alright boys, leave early for the day. We are done) that has so thoroughly over-saturated the wardrobes of Alliance players that words like ‘generic’ simply fail to get the point across.

I guess I’m asking what culture Arathor would take it’s aesthetic cues from. The Eastern Kingdoms are basically Europe on Azeroth (more or less). I just hope we don’t get generic viking gear (bEcAuSe HuMaNs ArE jUsT sMaLlEr VrYkUl LOL!) I want humans recognized as something all there own.

Stormwinders are directly descended from Arathor who left Arathi rather that witness the fall of the Arathor Empire when Lordaeron and other nations asserted their independence, and of course there’s Dalaran and the now-mostly vanished Alterac to consider. So what heritage, in particular, should Human heritage armor hearken back to? Theoretically when Worgen get theirs, we’ll have three sets of heritage armor based on Human history.

Two, technically yes, Humans are descended from Vrykul. But more important, Humans are Titan-Forged, just as Gnomes and Dwarves are, and a heritage armor set that remembers the role of Strom and the root of Humanity’s existence in refugees saved by Tyr, Ironaya and Archaedas would, in my opinion, be pretty great. Armor that remembers all the ways that Humans have been shaped by and in turn shaped their world.

Something a lot less boring than, say, yet another shiny silver plate set.

Question for the Queue
Is anyone else annoyed that only Combat Rogues got the spec name changed? For me I will never use the new name for the spec as just find it annoying that only a single spec got a name change. Are other specs that needed it more like Frost Mage/Frost DK or Protection Warrior/Protection Paladin.

Yeah, I’m pretty salty that we didn’t get Juggernaut or Gladiator instead of Protection for Warriors. I really hated that they changed the name of exactly one spec when there were so many duplicate spec names. I figured Paladins in particular only had one original spec name and Warriors could easily let them have Protection, and then Holy could be changed to Vindication or Redemption, something more strictly Paladin sounding.

I OFTEN FEEL LIKE I HAVE BRAINSTRAIN AFTER I EAT SOMETHING COLD, BUT NOW I HAVE A QUESTION FROM BRAINSTRAIN TO ANSWER

Q4TQ: Does BFA have too many zones? Six at launch, and two more now. Even for someone like me, who has everything I need from earlier patches finished, just the new content is a lot to deal with. Grinding two totally separate reps simultaneously is not fun. I can’t imagine being a returning player and dealing with this.

Mechagon really should have come with 8.1.

I don’t personally feel like it has too many zones, in fact, I’m happy because I can often skip entire zones unless they have an emissary or a WQ reward I really want and that, to me, is the hallmark of excellent content balance — do I feel like I can get away without having to sit down and do all the content? Yes? Then it’s well designed.

But of course, your mileage may vary.

Q4tQ: next we move from a Mitchtatorship to a Rossitopia. What is the first thing you will do with your newfound freedom?

I personally expect my style of governance would be more laissez faire and likely would lead to less of a Rossitopia and more of a Rossianarchy or Rossiocialism. But at any rate, at least all the dinosaurs would be properly feathered and all the therapsids would have their fur.

PLISKIN86 HAS TO ESCAPE FROM QUEUE YORK

I always think of good podcast questions then when I go to ask, I forget them. It’s super annoying

Well, don’t feel bad, often times I read a podcast question, come up with what I believe is a great answer, and then when we talk about it on the air I blank out. Still, we always need more questions, so feel free to email [email protected]dwatch.com with them. Especially Diablo ones. I mean, come on guys. We have occasionally gotten a couple of Diablo questions, but I really like answering them and we don’t get nearly as many as other games.

That’s the Queue for this Friday. I’ll likely pass out from exhaustion next week playing all these games. Hopefully the Republic of Rossi has a robust and redundant system of government that doesn’t need too much direct attention.

Blizzard Watch is made possible by people like you.
Please consider supporting our Patreon!
Filed Under: Games
Advertisement