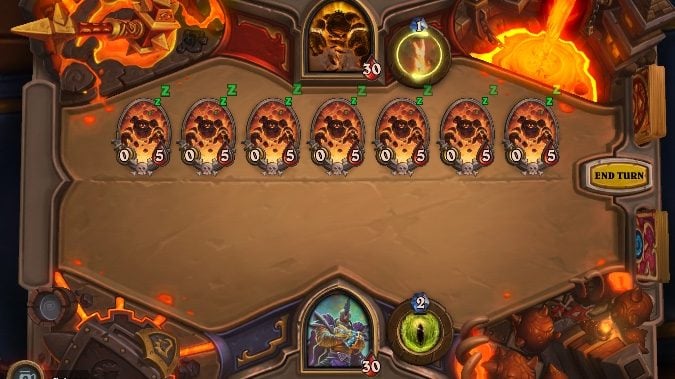 Stop me if you’ve heard this this classic tale of tragedy before. Once upon a time, a dedicated group of villains came together and stole the city of Dalaran. (If you haven’t heard this one, you should try Hearthstone’s single-player Dalaran Heist.) Our intrepid villains attached rockets to the city and flew away with their prize… until they ran straight into Blackrock Mountain.

No, I’m not sure how Blackrock Mountain plays into this, either.

The problem with crash-landing on Blackrock Mountain is that Blackrock Mountain has inhabitants, and any WoW player knows from experience that they are not exactly welcoming. And that sets the scene for this week’s Tavern Brawl. Like Hearthstone’s single-player modes, you’ll pick a class and run through eight boss fights as you fight your way through the mountain’s monsters. For every fight you win, you can add new cards and treasures to your deck — but if you lose, you’ll start from scratch with a new deck.

Blizzard is calling it the FIRE FEST-E.V.I.L., where Azeroth’s newest villains run head-first into some of the earliest bosses of World of Warcraft. And since you’re playing these upstarts, it’s the newcomers who will emerge victorious. (At least in this Brawl: Team 5 has one more planned for next week.)

But how can you win this devious affair? That’s what we’re here to find out.

This week have the choice of five heroes: Togwaggle (Rogue), Dr. Boom (Warrior), Lazul (Priest), Hagatha (Shaman), and Rafaam (Warlock). Each with a unique Hero Power, and all but Rafaam’s werelifted straight from the Dalaran Heist. If you’ve played the Heist, you’ll be familiar with most of them already, and some are better than others.

In week one of this Brawl, Dr. Boom was the obvious choice — and he’s still a great pick, particularly if you have any Warrior quests to complete. His Hero Power is a nice upgrade of the Dalaran Heist Warrior power: for just one mana two bombs into your opponent’s deck, which deal five damage when drawn. It’s a fair amount of damage on its own and a perfect ability for a bomb Warrior.

But Rafaam, who was added to the Brawl this week, is also a strong contender. For two mana, he’ll steal a card from your opponent’s deck, and if it’s a minion, it will go directly on the board. Since most bosses in this Brawl run minion-heavy decks, this is a great way to fill your board with big minions fast. It also steals resources from your opponent and helps take them down to fatigue — which is particularly useful against Vaelastrasz, who already draws three cards per turn.. Plus it’s just a lot of fun to use.

By comparison, the other Hero Powers feel unimpressive. Toggwaggle can add random cards to his hand, Lazul can reduce a minion’s attack by 2, and Hagatha can turn minions into random minions that cost 1 mana more. All of these abilities need time — and mana — to take effect, and they feel sluggish compared to the immediate effects of Rafaam and the inevitable big damage of Dr. Boom.

So do you feel like playing a Warrior or a Warlock? If you want to win, those are your choices.

How to beat every Brawl boss

While this Brawl is structured like a single-player adventure, it’s a lot easier — in large part because the bosses have a lot less health. Even at their beefiest, they only have 40 health, which is quite a bit less than the 100 health of the final Dalaran Heist boss.

But while these fights are all quite doable, knowing what you’re getting into will help you rack up those wins.

Play aggressive! Both of you only have 15 health for this fight, so you should go for his face immediately.

His hero power deals five damage to you if you have any unspent mana at the end of the turn, so do your best to combo your cards in a way that runs you out of mana every round.

Omnotron’s Hero Power lets him summon friends that increase in power, but they also increase in mana cost. He won’t summon anything too big or too dangerous too quickly, so standard gameplay should win the day.

At the start of the match, Garr summons a board full of 0/5 Firesworn, and when they die they deal one damage to you for each other Firesworn that died this turn. Garr’s Hero Power lets him do one damage to all minions, so he can (slowly) whittle away his own board and kill you with those deathrattles. You either need to kill him before all of his Firesworn die or kill off the Firesworn more slowly, so you don’t get hit with a big burst of damage all at once.

This devious dragon summons a 0/6 weapon that gains +1 attack for every card you play. Fortunately, you start the game with three 1-mana cards that will destroy his weapon, after which he will re-summon it and it will start at 0 attack again. It’s a great opportunity to make use of the Warrior’s Hero Power, which doesn’t count as playing a card. But beyond that, make sure you only bother playing cards when they’re good cards and destroy his weapon before it gets powerful enough to destroy you.

Honestly, I expected more from this guy. His hero power lets adds a random card from your class to his hand, which just isn’t that powerful. Kill him and move on.

Remember how I told you earlier to play a Warrior? That choice is really going to pay off here. Vaelastraz’s Hero Power forces you both to draw two cards every turn, which means lots of chances to draw all of the bombs you planted. Building a deck with even more bomb cards only makes this strategy more effective.

The big boss arrives! He shows up on the scene with Sulfuras (a 2/6 weapon) in hand, with a Hero Power that summons a 5/1 Magma Rager. When Sulfuras is gone, his Hero Power changes: instead of summoning a mob, it deals enemy damage to a random enemy. The goal is to kill him before he starts hurling fireballs around. But there’s a good news: Ragnaros has a few cards that do self-damage and he’ll happily attack your mobs with Sulfuras, doing damage to himself. Dish out as much damage as you can and let Ragnaros do the rest.

Brawls usually reward a Classic pack, but this one rewards a Saviors of Uldum pack which you can open when the expansion releases on August 6.

And hey, even if you don’t want those golden cards, you can always disenchant them for a fair amount of dust.