The Queue: It’s taking every ounce of my willpower not to plaster this with Gorgonopsids 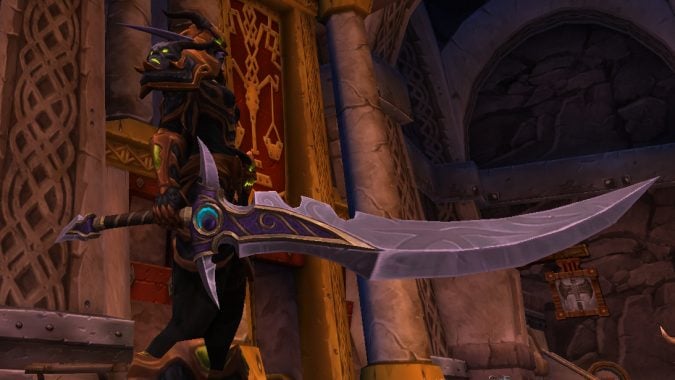 I’ve probably talked about the shrink wrapped effect, when a fossil is reconstructed with its skin and muscles so tight on the bones and not an ounce of any of the stuff like fat, fur, or feathers that we see on modern animals. To a degree, this is unavoidable — in many cases, we only have the skeletal fossils, since a fossil that preserves integument is extremely rare, so some shrink wrapping is unavoidable. We just don’t know what these amazing animals looked like.

I just wrote six paragraphs about that and then realized it was way too much, so I’m forcing myself to stop. Let’s do the Queue, guys.

Q4tQ: Blizzcon is in exactly three months, as the calendar flips (Nov 1). What’s your best guess at a “nobody saw that coming” announcement? And would it be well-received, like Overwatch, or less so, like Diablo: Immortal?

My guess is another mobile game. I have a vague memory of something about Blizzard developing a game similar to Pokemon Go, but Warcraft-based, so that would definitely be a surprise announcement. And it might be well-received if it was announced alongside a new WoW expansion, instead of replacing it. :P

I completely forgot that they were making new episodes of Mystery Science Theatre 3000. What does that have to do with your question?

I’m having a really bad week, sorry. Anyway, to answer your question, I don’t actually think they’re going to do anything surprising. I expect the news that we’ll get will be the stuff that’s been leaked and that everyone is expecting — Diablo 4, Overwatch 2, some details about a new Overwatch hero, maybe some Heroes of the Storm stuff like a new hero or map. I expect a new Hearthstone expansion, almost certainly 8.3 news because I figure we’ll get 8.2.5 sometime in October, and maybe a next expansion tease for World of Warcraft.

We know that Allen Adham returned to Blizzard in 2016 and as of now he’s the only one of the three original founders still working at Blizzard, since both Frank Pearce and Mike Morhaime have retired. We know Adham is supposedly working on new IP’s for Blizzard.  Since the last time we heard about any new IP’s from this new department Adham is running was back in 2017, it’s feasible that we may hear about one at BlizzCon this year. But I don’t expect it.

Still, if I was making a long shot bet, I’d bet on one of those IP’s Adham is working on for a big surprise announcement at BlizzCon.  I mean, after two years, it’s at least possible.

Q4tRossi: what could Blizz do to gracefully transition the Alliance away from it’s current image as “Anduin and the League of super best friends”? My own proposal has to do with political friction between Stormwind citizens who align their beliefs with Anduin, and the citizens who heard about Teldrassil and started having flashbacks of the First war.

You asked me for a graceful way to do that? Cause I am not great at graceful. Now, I can think of a few great ways to do it — imagine there’s a Horde/Alliance summit after the world is saved from whoever we’re going to end up saving it from — maybe N’Zoth, maybe Sylvanas, who knows — and Baine and his entourage come to Stormwind to sign some historic peace accord.

Everything is going great, until *gasp* Maiev Shadowsong assassinates someone on the Horde side. Maybe Saurfang or even Thrall. Now the Horde is furious and it gets even worse when the Night Elves make simultaneous attacks all over Azeroth, hitting Silvermoon, Orgrimmar, Suramar, Dazar’alor and Thunder Bluff and doing untold damage, maybe even killing a few more important NPC’s. Worse yet, when Anduin tries to calm things down, Tyrande reveals that this wasn’t dissidents working behind her back — she and Maiev planned this attack together.

Anduin finds that he can’t just order Tyrande around — she and her people are engaging in this war without his permission and they don’t care if he likes it or not. And it soon becomes apparent that there are a sizable number of people in the Alliance who think she’s right — the Horde has repeatedly attacked the Alliance and destroyed its cities. From Genn Greymane (king of a city in exile, he then lost his second home to the Horde) to Alleria Windrunner who lived through the Horde attack that killed her family, Tyrande might have enough support to threaten to tear the Alliance apart.

Meanwhile, the Horde is furious, angry, vengeful, but crippled. After Battle for Azeroth and then Tyrande’s surprise attack many of the Horde leaders are wary of getting involved in what looks like it’s shaping up to be an Alliance Civil War, and perhaps there’s also the issue of the Forsaken and Sylvanas to deal with, depending on if she gets deposed as Warchief and what happens to her after that.

That’s just one idea. Another is, after he gets defrosted, Gelbin Mekkatorque comes back weird in the head, finds Gearmaster Mechazod’s body, rebuilds it, and takes it to Mechagon where he uses the facility there to return Mechazod to life and activate Mimiron’s Titan Vault underneath the island.  Neither these ideas nor any of the others I have are what I’d call graceful.

LOTHARFOX WANTS TO BREAK DOWN THE HOTTEST PEOPLE IN WOW AND SURPRISE, IT’S DRAGONS

Wrathion got me thinking about who the hottest looking people in WoW (male and female) are, and I would think it’d be: Wrathion, Nozdormu, Kalec, Ysera, and Alexstraza…how did Bliz do such a good job at making most dragons in their humanoid form so much better looking than all other humanoids?
And if you started breaking it down by race, I’d argue Chromie is the best looking gnome (present company excluded).

Y’know, because they’re so hot, and they’re Dragons, and Dragons breathe fire, and…

Look, it was right there.

Also, I hesitate to play this game because I am ancient and old dudes speculating on who is hot in a video game isn’t a great look, but I kind of like Genn. He’s old and grizzled but still well put together.

FUZZYBUNNY WANTS TO KNOW SOMETHING SPECIFIC, BUT IT WORKS FOR A GENERAL ANSWER

If I wanted to be a Ret Pally in Classic but didn’t want to raid are they viable to quest?

Here’s a secret — as long as you’re not in a hurry, literally any spec was viable to level and quest in World of Warcraft back in the old days, and thus, should be viable in WoW Classic as well. Ret Paladins were more boring than not viable — a lot of our raiding Paladins put together Ret sets and used them all the time, and could (if played correctly) do decent damage.

I know a player who played a Prot Paladin on day one release of WoW and kept playing it until Mists of Pandaria. The game changed, but he kept on loving Pallies, and he never had to stop even though nobody wanted a Paladin tank before Burning Crusade. Because he was willing to accept that it would take a little longer for him to get quests done compared to a Rogue, the trade off was worth it to him.

So if you’re willing to maybe be a bit squishier, have to drink or eat or bandage between pulls, or just accept that it’s going to take you a bit longer, you can do quests and level on your own on any class you like and it’s viable.

Q4tQ: With all the rumors and speculation about Helya potentially being involved in this xpac’s events, do you think we’ll see Odyn again?

Why, do I have to prove myself worthy before I can use the bathroom or something?

Seriously, I would be happy either never seeing Odyn again, or only seeing him again in a cutscene where Helya gets to kill him.

This has been the Queue. Take care and have a good weekend y’all.