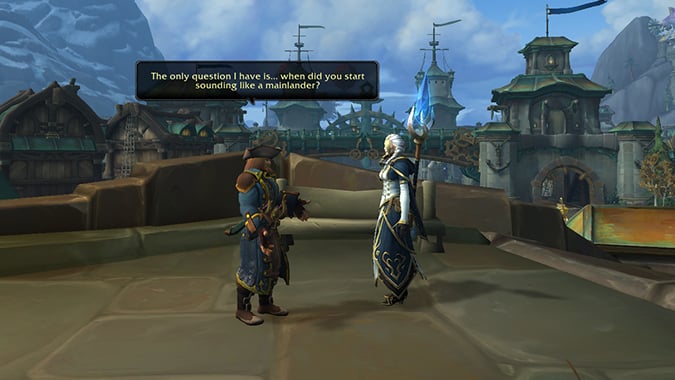 When the Warcraft RPG books were basically declared non-canonical back in 2011, I had hopes that the idea of ‘not canon unless we make it canon’ would include Tandred Proudmoore. I’m still incredibly happy to see him in-game, and that Jaina has an actual family she can lean on now. This does make me wonder if we’ll see anyone else from the RPG books pop up now, though…I really need to get my hands on those things and give them a once-over.

I also need to give your questions a once-over and answer them, so let’s get to that, shall we?

Q4tQ: Should players be able to sell soulbound stuff on the BMAH, at a greater cost, possibly based on how much the thing sells for?

I don’t think so. The whole point of the Black Market Auction House is that it’s not being run by players. It doesn’t make a profit for anyone, and it’s set up basically to take excess gold out of the economy, not give players even more gold. Basically, allowing players to sell anything on the BMAH would completely defeat the purpose of its creation, even if a larger chunk were taken out of the selling costs.

On the other hand, I still have an original Amani Warbear sitting in my bank that I cannot do anything with because it’s soulbound, and I’m just waiting for the day I can auction that sucker. Do I realistically think that day will ever come? No. But…you know, I’ll keep hanging on to it anyway. Just in case.

QftQ: Does it strike you curious that N’Zoth didn’t so much escape as, well, get decanted? All we have known of Old Gods is they are grossly, monolithically physical beings, rather than smoke monsters.

You know, the thing we’ve been repeatedly assuming about the Old Gods — all of them — is that the physical representations we’ve fought are only a minor fraction of whatever that Old God happens to be. C’thun appeared as just a floating eyeball, but there’s a giant chunk of something else we haven’t seen out there, presumably under the earth. We fought Yogg-Saron in Ulduar, but there’s evidence that tendrils of…whatever it is reach all the way down to the Howling Fjord.

And in the case of Y’shaarj, Aman’Thul tried to just pluck that Old God out of the planet, and tore a hole in the world that resulted in the formation of the Well of Eternity. So I wouldn’t call N’Zoth a “smoke monster,” necessarily — I’d say that’s one aspect of him that we’ve seen so far. I also kind of like to think that’s not smoke we’re seeing, it’s ink, like from the tentacles of some giant mutant sea leviathan of one sort or another.

Really though, the Titans have imprisoned the Old Gods, but the truth of the matter is that we don’t really know what those prisons look like, or how they function. We’ve seen chains, but how are those chains holding the Old Gods in place? What is their purpose? Are they merely physical restraints, or are they magically infused to do something else?

I feel like we may get more clarification on all of that sooner rather than later.

Q4TQ: is anyone on the Blizzard Watch staff who owns a Switch (Anne? Mitch? Bueller? Bueller?) playing Fire Emblem Three Houses? There are three or four of us here at The Queue who are totally in love with that game, and I’m wondering what the BW staff thinks about it.

Off-topic question, I know, I’m sorry! Yes, I do own a Switch, but I don’t have Fire Emblem. However Mitch also has a Switch, and I’m pretty sure he is playing Fire Emblem. Save your questions for Wednesday’s Queue, since he usually writes Thursday’s edition, and I’m sure he’ll be happy to answer them for you!

Confused by the concept of Overwatch 2 AND new overwatch hero. i figured like wow and starcraft 2 overwatch was just going to get constantly updated.

The rumors seem to suggest that these are going to be two very different games. Overwatch is a team-based shooter title, pretty much, while Overwatch 2 is rumored to be more of a PVE title — or at least, that’s what people are speculating. Keep in mind that absolutely nothing is confirmed in regards to any potential sequels/side projects. That said, there’s no reason both games couldn’t be running simultaneously, without effecting each other in the least.

The way I’ve always viewed Overwatch is that the story is the thing that’s actually going on. The gameplay and matches and everything else we’re doing? It’s sort of like playing with virtual Overwatch action figures. What we do in game in no way alters or shapes the narrative that’s being laid out for us — that’s like a side dish being served alongside the main course of team-based matches where we all beat the stuffing out of each other, regardless of who’s in Talon, who’s in Overwatch, who’s not affiliated with anyone, etc.

A PVE title is a different story…literally. If this is in fact a PVE title, then we’d be playing a character through some kind of narrative and following a story that has some sort of a point, presumably. It’s not a direct sequel to the existing game — they aren’t doing anything to Overwatch, it’s a great game and a lot of people love to play it. This is more like…releasing a novel to go alongside World of Warcraft. You can read the novel or not, but you don’t have to — it just adds additional context to the game you’re already enjoying.

Also keep in mind that “PVE title” doesn’t automatically mean it’s going to be an MMO, or a game that’s going to be continually updated as time goes on. This could, for all we know, be a one-shot PVE title that’s going to launch alongside Overwatch. It could have a story that has a beginning, a middle, and yes, an end. Blizzard hasn’t really stepped foot into the single-player RPG arena, but they’re certainly capable of telling compelling stories. This could be a way for them to dip a toe in the waters and see how well a title in that particular genre would perform for them. And if it performs well enough, then hey — they can always release more titles as time goes on.

But keep in mind, seriously — this is all speculation. We really won’t know more until we hear more about it from Blizzard, hopefully at BlizzCon in November.

Hey Queuers(?): I might have asked this before but will we be able to play Shockadin in Classic?

I mean…technically speaking? Yes. But Holy Shock is a level 41 talent in the Holy tree, so you’re going to have to play a good long time before you get there — and it involves investing a lot of points solely into Holy to obtain it. I don’t really think the Shockadin style of gameplay picked up and gained momentum until Burning Crusade, which was the point where it became something really viable and fun. Prior to that, Paladins in vanilla spent the majority of their time buffing people. A lot.

Keep in mind, however, that I spent the majority of vanilla raiding, so that’s where most of my experience with various classes lies. I did do some PVP, but it was mainly healing and wreaking havoc as a Shadow Priest, which was an entirely different thing. And my experience with Paladins is super limited, because I spent the majority of vanilla playing Horde, where Paladins simply didn’t exist. So any impressions I have in regards to Shockadin playstyle and its viabilty are solely based on what Paladin friends of mine had to say during Burning Crusade.

We might have more people that have more experience on the matter reading this column, however, so hey — if you guys have any pertinent information you can share on that topic, please feel free to do so in the comments!

Q4tQ: With the new quest replay thingy coming in 8.2.5, do you think we will be able to do the removed legendary questlines in MoP and WoD again if you’ve already completed them?

Nope! Those quests have been removed entirely — it’s sort of like asking if we’ll be able to re-play vanilla quests that existed before the Cataclysm revamp. They aren’t there anymore, and they were removed for a very deliberate reason. Blizzard wanted to make sure those legendary quest chains remained something special for the course of that particular expansion. They didn’t want them to be something you could just barrel through in a couple weeks later on down the road when you were a much higher level.

The impression that I get from what little information we were given is that this quest replay feature is basically there so that if you have a friend start playing the game, you can go to wherever they happen to be and pick up the same quests they’ve got, even if you’ve already completed those quests. It’s not necessarily for you to re-experience content so much as it’s a way to play with your lower-level friends who might need some help. If you both have the same quests, there’s no chance of either of you suddenly getting phased out from each other while leveling. I could be wrong, but I’m guessing we’ll hear more about that feature and its intended purpose fairly soon, which should clear up any questions.

But I wouldn’t bank on suddenly being able to re-play quests that have been removed, though. They were removed for a reason, and I think they’re just going to stay that way. Kind of a bummer — particularly with Mists, where that quest chain was a really, really good chunk of lore — but that’s how Blizzard wanted to handle it.