Qhira enters the Nexus today! Here’s what to expect from her, and the patch.

Like Orphea before her, Qhira is the newest character coming to the Heroes of the Storm roster who only exists within Heroes of the Storm. She is the last warrior of a race of Nexus dwellers who allowed infighting to consume their realm. Now she works as a bounty hunter while searching for anyone else who might’ve survived. The best part? She has a combination sword-and-whip!

While she doesn’t have the comic book lead up that Orphea did, Qhira’s voice lines, hero description, and spotlight start to paint a picture of the kind of person she is — competent, dangerous, and a bit of a workaholic. Qhira shares a lot in common with Maiev Shadowsong. If you click on her enough in a match, you’ll get the usual jokes about how her typical way to solve a problem is to whip it… whip it good. But keep clicking and there are a couple more poignant lines about how even with all her power she was unable to change what happened to her realm, and how lonely it is to be the last of her people. I can only hope that we’re given more information about her and her people down the line.

I know that Qhira came as a surprise for many people. Everyone’s got their favorite character from the other games in Blizzard’s lineup. Deathwing has been at the top of many peoples list for a long time now, as well as a multitude of units from StarCraft, or Yogg-Saron. Personally, I’m holding out hope for some two-for-one representation of Tauren and Druids in the form of Hamuul Runetotem — but I know he’s a bit of a longshot. Qhira is just so well made that I can’t be mad. Her voice actor is amazing, the effects on her abilities are top-notch, and the sound design is out of this world. If we’re only going to get 3-4 new heroes a year, we should be so lucky that they’re all as amazing as Qhira is.

Eagle-eyed watchers can also spot a couple of interesting teases in her spotlight video. Reaper’s mask and Brigitte’s shield can be seen in her trophy room — as well as a very large Tyrannosaur skull. And who does that Night Elf glaive belong to? Maiev and Illidan don’t use ones that look like that. Could these be hints to the next few Heroes who are coming to the Nexus?

After playing a couple of games with her on the Public Test Realm I’ve come to only one conclusion — she’s flat out amazing. Highly mobile and able to deal punishing amounts of damage, Qhira is going to make the healers of the Nexus work overtime to counter the bleeding from all of her abilities. Playing like a melee version of Lunara: Qhira’s kit allows her to Grapple into combat, deal damage with her Carnage ability, and avoid retribution for a short while with her Revolving Sweep.

As an Abathur player, I’m happy to have another in your face hero to give Symbiotes too. But speaking as someone who also likes playing Junkrat and Li-Ming from time to time, I’m dreading another hero who is going to be getting up in my face. Countering Qhira will involve lots of crowd control, and long-range abilities to weaken her on the way in. 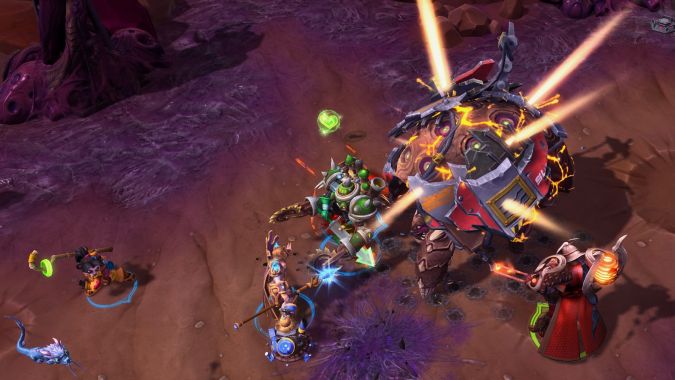 Her patch also brings with it changes to how to the ranked Storm League works. Gone are promotion and demotion games, instead you’ll just rise and fall without having to win that additional game. These could be pretty nerve-wracking for players, especially if you were facing a demotion game after a losing streak. There will also be a season-long quest chain to earn the fancy mount rewards. For the first of the new seasons, it will just be to win games. After that, they may shake up the quests to be more involved. Like requiring you to earn experience for your team in winning games.

The Braxis Holdout map also gets some minor tweaks that help to make the Zerg waves more of a threat. Ultralisks and Broodlords will be able to summon Zergling reinforcements. You’ll have to prioritize the big targets now, instead of just throwing one of Ragnaros’ Lava Waves at them. Pushing with the Zerg will be stronger too, protecting those will give you a ready supply of Zerglings to soak up the tower and keep shots.

Qhira will be going live in the Nexus on August 6th. I can’t wait to swing into action with her!