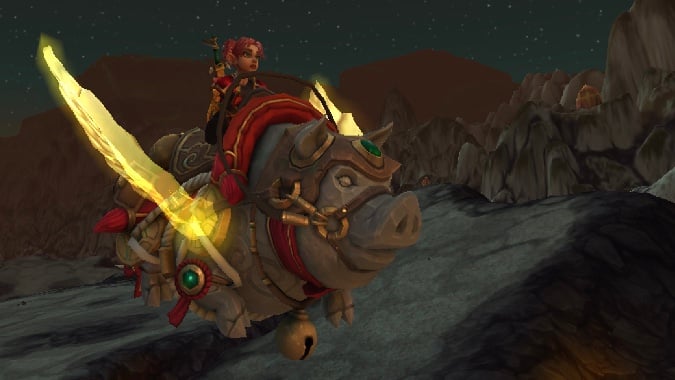 What? I don’t need an excuse to yell “whee!” at high volume, so you’re just going to have to deal with it.

Are there any elements in WOW that you think would make good mobile games and should be pulled out (or able to be played that way)? I’m thinking fishing would be cool as I don’t often have a lot of game time to make fishing worthwhile but do have a lot of time where a fishing standalone mobile game would totally work. Occasinoally I’ll do the Mission Table when I have nothing better to do, but rarely do it “in game.”

I’ve thought since day one that pet battles were an obvious segue into mobile. It’s just the sort of play that’s simple enough to work on a tiny mobile screen but complicated enough — building the right pet teams based on strengths, weaknesses, and skills — to have some interesting gameplay, but simple enough to fit in a tiny phone screen.

WoW-flavored Pokemon right from your phone? It would be great, and I’m genuinely surprised Blizzard hasn’t yet — particularly since they’ve made such a big deal about mobile over the past year or so.

How far progressed are you in Azshara’s Eternal Palace? And how do you think it compares to the other raids of this expansion?

My heroic group is presently 6/8 in Azshara’s Eternal Palace, and we’ve (unfortunately) spent the past few sessions walled on Za’qul. You really need a certain number of healing cooldowns to manage raid damage, but we had a small group last week so running enough healers left us low on DPS. But the fight, while complicated (and healing intensive) doesn’t seem impossible — we just need to practice until we have the rhythm of it down pat.

I’ve enjoyed this tier because it’s had some interesting mechanics — the coral-crushing on Ashvane, the healing buff/debuff on Behemoth, the decrees on Queen’s Court. They’re mechanics that change how you play, and those are always the most interesting. However, to get to 6/8 it does feel like we’ve progressed rather quickly from clearing normal to almost clearing heroic. If we finish in a couple more weeks (we don’t bother with making the jump to mythics), we’re probably going to have a lot of time to kill before the next raid.

Of course, as my tank has pointed out, that will give us the time we need — need? — to play WoW Classic.

Q4Q: Why do you think BfA has been such a disappointment?
Is it the actual failings of the expansion itself, or just its inability to live up to its predeceessor?

With every expansion, Blizzard brings more sophisticated storytelling to World of Warcraft, and I think that’s true of Battle for Azeroth as much as any that came before it. However, the storytelling is definitely hindered by the fact that I just don’t care about the story.

I’m not a fan of the Alliance/Horde conflict, and I simply don’t understand what Sylvanas is doing or why. While she isn’t one to show her hand early, right now I’m just confused. That is not to say that some story elements aren’t interesting: the expansion has had some truly amazing voice acting, and the Dazar’alor cutscene after the Rastakhan fight is the best the game has done so far… but I’m not invested in the story overall. That has lead to a lot of disconnect from the game.

Beyond the story, I think BFA suffers from overly complicated end-game mechanics. Azerite Traits can be very frustrating, because every class and spec has a handful that are good, a handful that are okay, and a handful that are terrible. This can lead you to ignore upgrades, because an ilevel upgrade with bad traits may not be an actual upgrade. It’s always frustrating to pick up a shiny new piece of gear that’s a huge upgrade… only to realize the traits are so bad that the extra stats probably aren’t enough to actually make it an upgrade. This is compounded by the fact that you need more Azerite power to unlock traits on higher level armor, so you might get an upgrade that you can’t unlock all the traits for, and thus it’s not an upgrade.

And now we have Essences, which are something we’ll probably be grinding for on all expansion. These do have some interesting gameplay mechanics that actually change the way you play, which does a lot to shake things up. But the first levels are universally weak and everything else takes some significant effort to unlock. For example, I’ve been focused on raiding this expansion, and have run very few dungeons. I don’t have a good group to run Mythics and Mythic+ in, so I rarely do them — but to get Life-Binders Invocation, which my raid leader thinks is our best bet to boost AOE healing, I have to run an M+4 for rank 1 and an M+7 fo rank 2. That’s just not likely to happen any time soon.

The system feels like another set of hoops to jump through, and for what? I’m not really sure anymore, and I’ve just started letting Questionably Epic which traits and Essences I should be running, because thinking about it just gives me a headache at this point.

I don’t think Battle for Azeroth is a bad expansion, really. But it has some elements that are frustrating and keep me — and probably others — from really getting into it.

It’s likely that she’ll have some role in the story soon™. What do you think it will be?

1) related to the Forsaken or not? Does she become their leader? Does she try to?
2) or will she lead an Alliance faction of Undead?
3) or will she have nothing to do with the playable races?

I think Calia, and her fate in Before the Storm, is completely fascinating. Beyond Sylvanas’ endless quest for a way to continue the line of her people by letting them reproduce in some way, there was little in the way of story development for the Forsaken. But in the pre-expansion novel, we saw a completely different side of the Forsaken: Undead who wanted to reunite with their loved ones.

It didn’t end well, but it presents interesting story possibilities.

I like the idea of Calia as the leader of a new faction (or Allied Race) of Forsaken who embrace the light. But it’s still hard to see where these Forsaken would fit in the world — and the BFA story hasn’t offered any insight. It has to tie into whatever Sylvanas is doing though… doesn’t it? I’m not just sitting here indulging in wishful thinking, am I?

What’s the best store mount in the game?

MITCH ASKED, BECAUSE OF COURSE HE DID:

You and several of your Blizzard Watch coworkers find yourselves stranded on an island. You’ve been tasked with assigning duties for everyone. You need two people to create reliable housing, one person to fetch food/water, and another to keep Mitch out of trouble. Who does what?

This is the sort of thing that requires teamwork, which really just means we must rely on our friends to get things done. And while housing and foraging are really crucial to surviving on an isolated island, keeping Mitch out of trouble is going to be a job that takes a village. We’re all going to have to work on this one.

But beyond the fact that Mitch needs babysitting, well, really, we’re all competent adults (or we all can fake being competent adults), so why not keep pretending even though we’re stranded on a mysterious island?

But this is really a great (weird, but great) discussion topic, so go at it, Queue?

That’s all, my friends. (And isn’t it enough?) Until next week this is Liz signing off.