What are Diablo 3 Seasons, and how can I participate?

If you’re new to Diablo 3 or just to the concept of Seasons in the game, you may be wondering what’s going on with all the hype about the upcoming Season 18, which starts this Friday, August 23. You may not know what a Season is at all, and thus, are pretty confused by all of this.

But don’t worry: it’s not that complicated, and we can get you up to speed fairly quickly.

What is a Season?

Starting back with Season 1, the concept of a Season in Diablo 3 is all about starting over.  At the beginning of a Season, you have the opportunity to create a brand new character at level 1 who will have their own unique stash that isn’t linked to your non-Season characters, and while those characters will still have all of their Paragon progression, your Seasonal character will not — your Season character  is a true blank slate, with no gear, gold, or items outside of those earned during the Season itself.

You can create more than one Seasonal character during a Season, and those characters do share a stash, Paragon progression, and gold. They will not share any of those with any non-Season characters, but they will share amongst each other.

How do I make a Seasonal Hero?

During a Season, there will be a checkbox on the Character creation screen, just below the Hardcore Hero checkbox. It’s grayed out when the Season isn’t available, but when it is, you can click that box and make a Seasonal Hero. You can play a Hardcore Seasonal Hero by clicking box boxes, so if you’re feeling very adventurous, go ahead and play it however you like.

When you start a Seasonal character, it is as if you’re starting Diablo 3 for the first time. In addition to losing your stash spaces and Paragon levels, you won’t have unlocked all the difficulty levels yet — you’ll have to progress in the Season before you can start boosting the difficulty up to Torment, for example.

If you have a character you’re currently playing and you want to keep playing that character but try the Season out, you have two options. One is to create a new alt of the same class, but that can end up with you having six Barbarians when the Season is over. The other option is the Rebirth system, which allows you to roll a selected character back to level one and convert them to a Seasonal Hero. I have one Barbarian I tend to Rebirth every Season, that way I only have four Barbarians on my account. 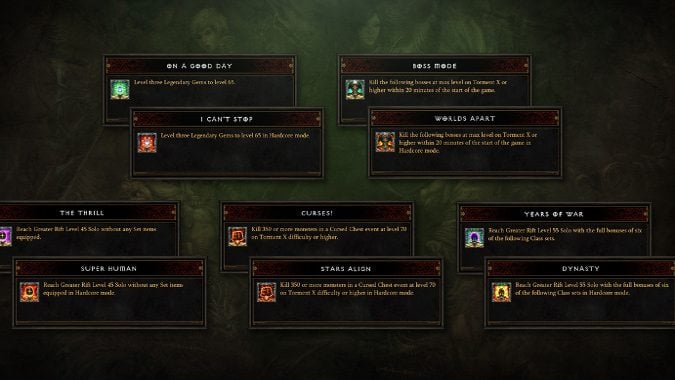 Okay, but why should I do this at all?

Well, for starters it’s fun. But also, there’s a competitive aspect to Season play, and there are unique rewards to be had. Each season has its own unique Seasonal rewards, but they tend to be variations on a theme. The Haedrig’s Gift reward is a complete set of Set Armor for the class of whatever character opens it, which you get as you complete the Season on a character.

You can earn the full three Haedrig’s Gift boxes on one character and then send them to another Season Hero to open, if you so choose. It has to be another Season Hero because you won’t be able to share them with your non-Season characters, but it can be a level 1 alt you make just to receive the Haedrig’s Gift. Each box of the Haedrig’s Gift will contain up to two pieces of the Set, and all three will complete the set, so it’s better to open all three on the same character. Each Season offers a different Set for each class, and the specific Set changes from Season to Season, so it’s a good way to get a complete version of a Set that’s been eluding you.

In addition to Haedrig’s Gift, each season has a variety of cosmetic rewards depending on the Season itself — usually things like Character Portrait Frames, wings, cosmetic-only items, and pets are available. There are also Seasonal Achievements for achievement-hunters and special events known as Conquests, in which you can race to complete before other players. These are tracked on the Leaderboards so you can see what your ranking is. 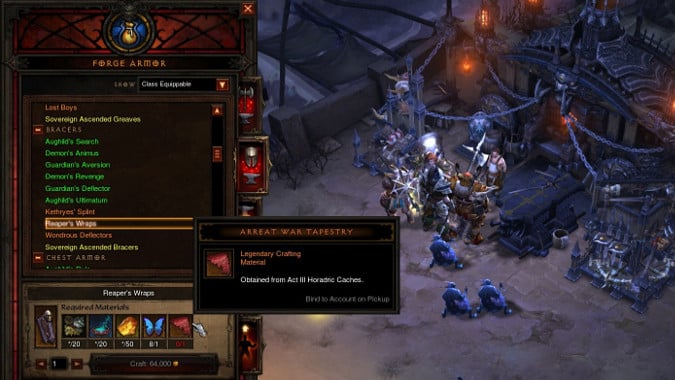 What happens when a Season ends?

You may be thinking that it doesn’t really matter what you do during the Season, as it doesn’t count towards your usual characters. But fear not — at the end of a Season, all the items you earned are mailed to your mains (you can get them on any character you have) and all your gold is added to your stash. You also get all your Paragon experience — the game doesn’t just stack your Paragon levels, because the amount of Paragon Experience it takes to gain Paragon levels increases per level, but it will add every point of Paragon Experience you earn to your total, so you will see a jump in Paragon levels at the end of your Season for your non-Seasonal Heroes.

This can and does often mean you need to do some balancing of your Stash, as you’ll probably have nearly filled both your Main and Seasonal Stash by the end of a Season, so get ready for a new Seasonal Cleaning out, but as problems go, I have so much loot is a nice one to have.

So that’s how Seasons work in Diablo 3. With Season 18 on its way, you now know how to get started. Have fun smashing demons.