The Queue: I can’t see myself 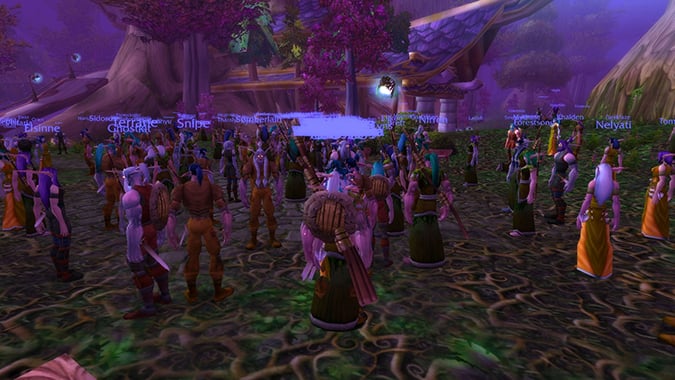 Logging into Classic was certainly interesting, once I managed to make it past the exceptionally long queue times. For now, though, that journey is on pause — but hey, given the sheer number of Night Elves bopping around in the starting zone, I think Teldrassil’s in good hands, right? Meanwhile, we’ve got a bunch of non-Classic questions to get to — and one small one at the end. Let’s get to it, shall we?

I have a Lich King lore question. I used to think that the Lich King in his current form was Ner’zul + Arthas + Bolvar, but now I’m realizing that Arthas is not in the mix anymore, right? Does this mean that we could be dealing with Ner’zul as the Lich King again? Possibly?

This is a pretty good question, and unfortunately, the answers to it are…vague, at best. From what we’ve been told, the original iteration of the Lich King was created by Kil’jaeden, who encased Ner’zhul’s spirit in a block of ice from somewhere out in the Twisting Nether. All those chaotic fel energies did something to Ner’zhul’s tortured spirit, creating the initial Lich King. The block of ice was then shunted off to Azeroth, to create the Undead Scourge and attempt to weaken the world in preparation for the Burning Legion’s eventual takeover.

Obviously none of that came to pass — we successfully defeated the Burning Legion in Warcraft 3, ruining their plans. However, Prince Arthas Menethil was an unfortunate casualty of those events. His spirit essentially joined Ner’zhul’s in the Helm of Domination, making the Lich King even more powerful as a result. But in the novel Arthas, something interesting was also revealed. First, Arthas fought and successfully banished the last remnants of his own humanity. Second and more importantly, he appeared to also get rid of or somehow squelch Ner’zhul’s spirit as well, impaling him with Frostmourne.

What does that mean? Well…we aren’t sure. It certainly seems like Ner’zhul’s spirit was out of the picture at that point. And when we defeated the Lich King in Wrath, Arthas’ spirit was banished to a place of eternal darkness — Sylvanas saw him, very briefly, when she leapt off the Frozen Throne in the short story Edge of Night.

It’s assumed that Bolvar is just in charge now, and as such, is the only dominant spirit present in the Lich King entity. But we don’t exactly have proof of that. Bolvar’s been up to some really shady behavior — and it makes one wonder if Bolvar finally just fell to corruption, if Ner’zhul is still there somewhere, quietly whispering in his ear…or if there’s some other odd situation going on that we simply don’t understand just yet, because we lack the relevant information.

Either which way, it’s an interesting mystery.

Jewelcrafting Tools of the trade question. Does the fine azerite powder only drop in the dungeon or is it like the enchanting one and you can get ti from Ashvane mobs outside?

Technically it also drops from the Ashvane mobs outside and around the world. However, the drop rate is really, really low. If you want the speediest resolution to that quest, I’d recommend just going the dungeon route — you’ll gather the necessary powder much quicker than you would just trying to grind it out in the open world.

Q4tQ 4Anne Stickney : Anne, while reading the Wow Diary (by John Staats) he mentions that their used to be an in game card game , that Jon liked more than Magic the Gathering. Do you think this was what later became Hearthstone?

Nope! Not even a little. Hearthstone wasn’t a twinkle in anyone’s eye at that point. I would say if anything, it possibly led to the eventual creation of the WoW TCG, the physical card game that ended up kind of being the precursor to Hearthstone. The original TCG shared some elements with Magic: The Gathering, although obviously it was an entirely different universe. Keep in mind, however, I’m speaking as someone that first played in the original beta, so I have no idea what that original in-game card game looked like. It definitely wasn’t there when I started playing!

Q4tQ: What would happen if you consumed Old God flesh?

This question has me a little concerned about you, Mistah Jay. But I’ll answer it regardless — or try to.

Short answer? We have no idea. Longer answer? Given the Old Gods’ penchant for corruption, I’d assume that Void corruption would be nigh-inevitable at that point. I mean, you’re basically chowing down on a creation of the Void. I don’t think possession would be a likely outcome. Heck, I don’t even know if the Old Gods have souls or spirits that can possess something. But I highly doubt you’d retain your sanity as part of the process.

Also, I can’t imagine it’d taste very good. I mean, have you seen the muck that Yogg-Saron is sitting in? Imagine sticking that in your mouth. Ew.

Because Ratchet isn’t officially a Horde town — it’s a neutral port controlled by the Steamwheedle Cartel. While yes, Gazlowe has leaned a little more towards Horde interests than Alliance, a lot of that is because the Alliance were…trying to block off Ratchet. Doing so would’ve cut him off from half of his potential customers, and that seriously annoyed him. If the Horde tried to blockade Ratchet, it would do the same thing, just the other way around. And no matter how quasi-friendly Gazlowe happens to be with the Horde, nobody comes between a Goblin and his profits and makes it out of the picture unscathed.

Icyveins said this: “Dungeons are much easier than people have historically been used to for Classic content”

Does this mean that dungeons are easier than in “real” Vanilla? How have people been finding 5 mans so far, compared to vanilla, BC, post-cata, whatever?

It’s not that dungeons are easier — it’s that we’re way smarter than we used to be, and we have access to way more information. This isn’t to say we were stupid in vanilla or anything — far from it. But we had absolutely no idea what to expect with each dungeon and raid that came out. We didn’t have advance knowledge. We didn’t have datamined information that clued us in on what to expect with each boss fight. We didn’t have guides that went over each encounter phase-by-phase and let us form strategies in advance.

Back in vanilla, my first raid leader approached each new encounter with the same strategy — let the Hunter pull it, and let’s see what it does. From there, we formed strategies on the fly, eventually puzzling out exactly what needed to happen to get us the loot we were after. We didn’t tab out to look at YouTube videos or Wowhead. We just muddled on through and figured it out ourselves — because those resources weren’t readily available back then.

That’s why you’ve been seeing people level so fast, and why some raids have already been cleared. It’s not that it’s any easier, it’s just that quite simply, we know what we’re doing now. We know what to expect. We know how the fights work, because we did them so long ago that it’s old information at this point. We know the best and fastest ways to level, and we can capitalize on that knowledge to buzz through Classic like a hot knife through butter if we want to.

And in comparison to encounters in Battle for Azeroth, raids in WoW Classic are almost painfully easy. They didn’t need to be mechanically complicated, because we were all fumbling our way around back then.

Basically, there’s a big difference to heading into Molten Core, knowing the path to every boss and the fact that you have to douse the runes in order to progress pass Domo, and encountering that large, darkened cavern for the first time, unaware of where anything happened to be. Having no idea what the various trash mobs did, or that you had to make the flames on those little metal doohickeys go out before you could progress beyond a certain point. Or what you had to do in order to douse those little doohickeys, or who you had to speak to, or the fact that said watery savior was all the way on the other continent.