There are certain themes we hear when discussing Sylvanas Windrunner and her role in World of Warcraft lately. As Warchief of the Horde, she’s taken a far more aggressive stand with the Alliance than any previous Warchief in World of Warcraft, and that includes the one that everyone loves to compare her with, Garrosh Hellscream.

In fact, it’s safe to say that only Orgrim Doomhammer could be said to have been more aggressive than Sylvanas. Even Blackhand focused almost the entirely of his energy on destroying one city and he got assassinated by Doomhammer in the middle of trying to destroy it. Plus, he was a puppet for Gul’dan, and for better or worse it currently seems that Sylvanas is no one’s puppet.

Potential spoiler warning for the ending of Battle for Azeroth

Recently, at this year’s ChinaJoy, John Hight (the Executive Producer and VP of World of Warcraft) made a statement about Sylvanas. The folks at BlizzPlanet did a post about it, where they discussed how in the past few expansions, the main boss of the previous expansion has survived to influence the next one, and thus that it isn’t surprising that Sylvanas isn’t going to die this expansion. And they do sort of have a point — Garrosh Hellscream caused the expansion following Mists of Pandaria and died during it, and if you count Gul’dan as the true villain of Warlords then yes, he survived into Legion, where he died in the second major raid. Clearly we could argue that Sargeras both survived the end of Legion and he influenced Battle for Azeroth by being the one who stabbed the planet and caused the whole Azerite situation.

But to me, that highlights that you can in fact do more with a character than simply bump them off. And it leaves me thinking of ways we could see Sylvanas continue on in the next expansion. 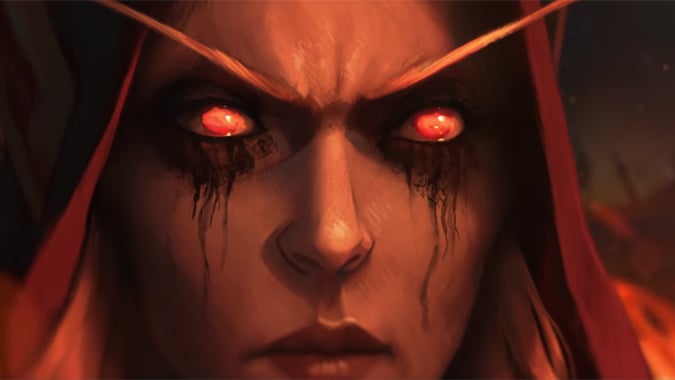 There is no reason to expect anyone is even going to be in a position to kill Sylvanas by the end of this expansion. We know she has Xal’atath, and we know she sent Nathanos to Nazjatar with it, and we have no idea what he did when he was there while everyone else was focusing on Azshara and N’Zoth.  If the release of the Old God means that patch 8.3 is wholly or even partly focused on him, then Sylvanas may in fact have nothing to do with the end of this expansion at all. For all we know she and Xal’atath will even launch a devastating surprise strike that wholly changes what the Alliance and Horde have been fighting over this whole expansion.

For all we know, as soon as it looks like N’Zoth’s going down, Sylvanas is going to show up and use that empty blade of hers to draw the essence of the Old Gods in, and then she’ll have the power to raise legions of Undead to serve her. Now truly a Lich Queen, she tells the living to enjoy what little time remains to them, and rips a hole straight to the Shadowlands. She begins preparing to turn Azeroth into the world of Undead that Arthas once thought would be the only means to defeating the Legion, only this time it’s the Old Gods she intends to destroy with her numberless waves of the dead.

Whatever Sylvanas’ role in is patch 8.2.5 as the War Campaign concludes, or even patch 8.3 — and whoever ends up as the ultimate boss of this expansion — it’s an extremely premature idea that we’re going to kill Sylvanas, or even that she’ll be defeated at all this expansion. There is no reason to believe she’ll even lose, much less die.

But assume for a moment that Sylvanas is defeated. What would happen?

There are other players who will have significant differing opinions about Sylvanas Windrunner at the end of Battle for Azeroth if she is defeated. And some of them align in strange ways.

The Night Elves and Worgen want her dead. The Worgen have been driven from their homeland, and now they’ve even seen their place of refuge destroyed — their leader, Genn Greymane, lost his son Liam to Sylvanas personally, and now he nearly lost his wife Mia when the Horde burned Teldrassil. And the Night Elves saw thousands of their people die when Teldrassil burned. Tyrande Whisperwind even risked her own life to call down and embody the vengeance of Elune, just to take back Darkshore and punish the Horde for what it had done. You can put these two characters firmly in the Death to Sylvanas camp.

It’s possible that some in the Horde may very well share their opinion. Sylvanas has imprisoned Baine Bloodhoof. Varok Saurfang is openly acting against her, and he even solicited the former Thrall, Go’el, to aid him in his insurrection. Orcs are an extremely pragmatic people when it comes to political infighting. Thrall was fully prepared to cave in Garrosh’ skull and now we all have hindsight enough to say well, if Thrall had caved in his skull, Warlords never would have happened so it’s quite possible Thrall would be okay with killing Sylvanas as well.

Meanwhile, even though Anduin has been extremely forthright in his desire to stop Sylvanas, he’s still Anduin — assuming she is stopped, is he going to be okay with killing her? Probably not without a trial, at the very least.

This is complicated for many reasons. It will likely cost him support — while he and Genn have a close relationship as allies, this could be the act that strains that closeness to its limits. Anduin would likely have the support of Calia Menethil, who wants to achieve a kind of detente with the Forsaken, and Jaina, who seems to be on the path towards trying for Alliance/Horde cooperation and diplomacy again after helping save Baine from Sylvanas. And Baine himself could well support any efforts Anduin made towards this goal. It comes down to whether or not he sees a benefit to his people and the Horde — and on what Sylvanas does in the patches to come.

The death that could shake both factions apart

The fact is, Sylvanas has a lot of extremely loyal followers. I don’t think there’s much of anything that could shake the Forsaken out of her control — she’s the figure who liberated them from the Lich King, the one that made sure they had a place in Azeroth and who has been tirelessly trying to provide them with a means to exist. Killing Sylvanas, or even just putting her on trial, risks alienating them as well as those members of other Horde factions who served her directly and see no problem with her actions.

But not killing her or putting her on trial risks continuing the war.

There’s no path to peace that doesn’t end in retribution of some kind for the destruction of Teldrassil. There’s no way to imagine an Alliance where Tyrande, who again risked her own life to become the embodiment of her god’s vengeance, accepts less than Sylvanas on trial and even that would likely need to be sold to the Night Elves as a compromise. And while Calia Menethil is appearing with a new model in patch 8.2.5 in an as yet unknown capacity, that hardly means that Sylvanas can or should be replaced as head of the Forsaken by someone most Forsaken don’t know and whose brother was the reason they ended up this way. They’re not likely to accept her as their leader just because she’s a unique form of Undead… unless she can do something to prove she’s their future.

What if she’s sentenced to life?

Alleria Windrunner accepted the Void into herself in order to battle the Legion and has since opposed Sylvanas every step of the way in Battle for Azeroth, and her Void masters clearly hate Sylvanas. Meanwhile, the Holy Light, the Void’s opposite and eternal opponent, has been tinkering with Undeath.

What if at the end of this expansion, the Light takes resurrection as far as it could possibly go, and raises Sylvanas back into life? What if we get a Lightforged or Lightbound version of the Ranger General, to serve the Light as a master tactician in the coming war of Light and Darkness? If the Old Gods are back, and Azeroth is going to be their battleground, it’s quite possible that the same thing that was one going to be forced on Illidan could be offered to Sylvanas — a way out of the predicament, where nobody gets what they want.

Just me musing about Sylvanas and what should happen to her, I hasten to add. I know nothing, and am absolutely sure that last idea isn’t going to happen.