The Queue: Leading the charge 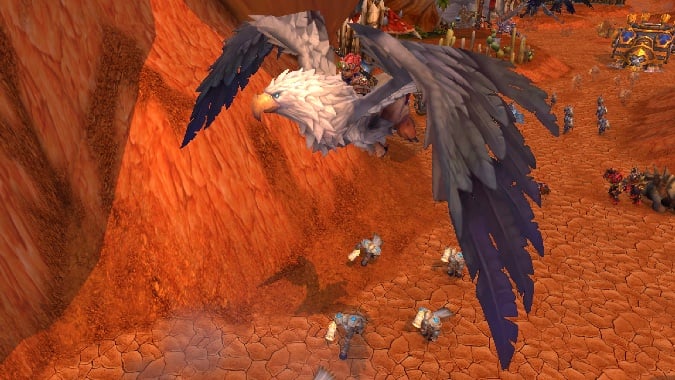 So some stuff happened in WoW yesterday, but the absolute most important thing was that I did not get to punch Tinkmaster Overspark in the face. Again.

Basically what I’m saying is that patch 8.2.5 is an irredeemable disappointment.

As I am sure you are all aware, I play a Gnome, which means I am generally against punting Gnomes. It is cruel and frankly impractical — if you want to punt something, we aren’t very aerodynamic.

I will make an exception for so-called “Tinkmaster” Overspark, who gives all Gnomes a bad name. This is a Gnome who believes himself the height of genius, and has surrounded himself with people who believe the same. And his “genius” tends to involve letting other people do all the work and brushing it off when they get injured or even killed. He places no value on the life or happiness of his fellow Gnomes: he is purely interested in his own glory. And, after all, if his worshipful followers die, he can always replace them with more worshipful followers. (I guess they die before they can get the word out that he’s definitely not worth worshiping.)

If anyone deserves to be punted, it is him.

I mean. I wouldn’t punt him, personally. That’s really best left to someone taller. But I would really enjoy breaking his nose with a good kick to the face.

What would you like to see as the next story beats for gnomes generally, and/or Mekkatorque specifically?

Mostly, I want to see Gnomish ingenuity valued and respected (which ties into getting rid of nobodies like Tinkmaster Overspark). We’ve had moments of this. We saw Mekkatorque kicking ass in the Legion cinematic and in Dazar’alor. The Gnome heritage armor quest had us working with an elite Gnome strike team. We’ve seen a lot of Kelsey Steelspark this expansion, and she’s fantastic (even though she does seem to outsource a lot of work to us).

And I’m really glad for those stories, but I always want for a Gnome to be the hero, in a game world that’s highly focused on Orcs, Humans, and Elves. There are a lot of races that don’t have room in the spotlight because of that focus.

I’d like to see us retake Gnomeregon, or simply move on and create a new Gnomish capital (more than the small settlement of New Tinkertown). I want to see Gnomes making progress as a race rather than being tethered to their failures in Gnomeregan, looking backwards instead of forwards. Either we can retake our original home, or we should move on, and build something bigger, grander, more ingenious (and probably more overcomplicated). We’re creators, so let’s create.

And I’d like to do that with Mekkatorque, who certainly seems to be the smartest of us all. But even if he is the cleverest of the Gnomes, surely one of us can figure out how to free him from his escape capsule and heal his injuries — or come up with ways for him to work beyond whatever injuries he has.

We’re problem solvers, so let’s get out there and solve some problems. It’s not like we have a shortage of them.

Q4tQ: Do you expect 8.3 to arrive on the PTR before BlizzCon?

Nope. I think 8.3 will be a big BlizzCon reveal, with the PTR likely to go up shortly after the convention. It just feels like we’re too close to BlizzCon to have any news right now — they’re going to save it up for a thrilling news-stravaganza.

Who is the next warchief of the Horde?

The Horde needs a level-headed leader, who can think to the future not only of the Horde, but of Azeroth. I think that means a Tauren, which means Baine — or if he doesn’t want the job, Mayla. It may be interesting to see one of the Allied Races taking a more active leadership role, and Mayla is both level-headed and has already gone through some serious trials leading her people. Perhaps she has the experience to shepherd the Horde as a whole. I don’t think she’d want the job, but I think she might take it.

As an Alliance player, were you satisfied with the cinematics?

The cinematics were beautiful and moving, but at the same time this feels like a story we’ve been told before. It feels like we’re on a merry-go-round of Horde vs. Alliance where a villainous leader takes over, everyone goes along with them, eventually a band of Horde rebels join with the Alliance to defeat them, and then the Alliance walks away, sure that a change in leadership will usher in a new era of peace.

We’ve been here. We’ve done this. Though the faces are new, the story feels old.

I’m not exactly dissatisfied with the cinematics, but I do wish we could start treading new ground.

Is Classic the salvation of the World of Warcraft franchise?

Playing Classic is, in some ways, refreshing. It is always good to look back to where you’ve come from, and Classic simply has the undeniable draw of nostalgia. Even for me! I think modern gameplay and conveniences are huge improvements over Classic, but I’m still drawn back.

Particularly at the end of the expansion, having the option to do something else is just plain fun.

Whether we’ll all still feel this way in six months or a year is in question, though.

What are the five best dungeon or raid fights as a healer?

It’s difficult to pick a favorite, though I do enjoy Eternal Palace because none of the fights are straightforward “just keep healing” fights. (I enjoyed Dazar’alor before that for the same reason, but I think Eternal Palace is better across the board.)

However, I do have a very clear least favorite fight of the expansion: Jaina.

Jaina is a complicated, multi-phase fight, but I also find it a boring fight to heal, because most of the things that kill people can’t be fixed by healing. There are two major roadblocks in the Jaina fight:

Sure, it’s fun to be able to throw around some Rising Sun Kicks. But I’m a healer, and I’m built to heal. The Jaina fight has significant chunks of time where there’s nothing for me to do except a rather weak DPS rotation. I spend almost all of the first phase DPSing because the healing requirements are low, and I spend a lot of the rest of the fight DPSing because there’s nothing better to do.

Note: the “nothing to do” problem can vary greatly with the quality of your group, as smart players with strong DPS will quickly get people out of ice blocks so you can just heal them as needed. But still, it is a long, tedious fight with a lot of fatal situations that healers simply can’t do anything about. If I wanted to spend a fight DPSing, I’d play a DPS class (or just switch to my DPS spec). On Jaina, I spend a lot of time DPSing and wondering why I bothered logging on.

Fortunately both of my raid groups are now done with Jaina, so I never have to go back there. Hooray!

(Addendum: Blackwater Behemoth in Eternal Palace does have a similar problem, but, really, as long as DPS plays the mechanics it never feels like a problem that stops me from keeping a group alive.)

And that is all for today, my fine friends. I will see you back here next week, as is the unending, unchanging nature of the Queue.