Character Profile: Sixthousand, walking away from it all 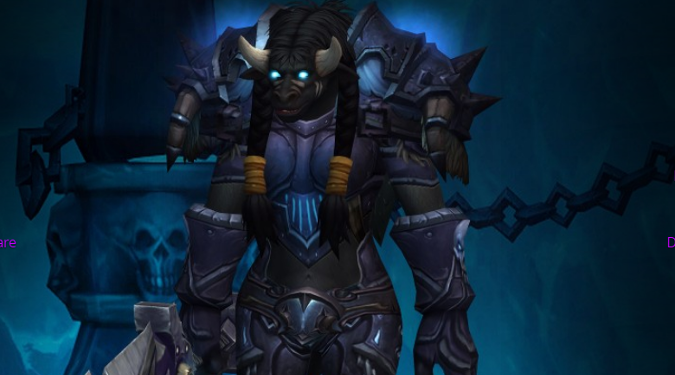 This character profile has been written for Sixthousand, one of our supporters. If you enjoy it, you can check out the other profiles we’ve written, too!

“I’d assume so.” It was strange when a Tauren got sardonic. Their faces weren’t as expressive as an Orc or an Elf, their muzzles and snouts tended to flatten out some of their delivery. But Six always managed it, somehow, and Darakka was once again surprised yet not at all surprised by the mockery in the crook of her jaw. “You have asked me many in the past. Like when we killed Sindragosa. So, so many questions. Even when Callil died, all you had for me were questions.”

“Are you sure? She looked dead to me.” The giant runeblade Six carried was point into the ground, and she was leaning against it. Her eyes, alight with a cold blue glow, made her face look mildly skeletal. Her voice echoed as if her chest was a cavern. “And I’m pretty good at knowing the dead.”

“The ancestors prevented her from leaving.”

“So she was dead but forced to remain. Huh. Good to know.”

“Six.” Darakka took a breath. “Why aren’t you coming?”

“See? You can ask why.” She walked to the edge of the grass, looking out over Mulgore. Darakka was fairly certain she hadn’t been back to Mulgore in years, not since she died.

“Are you going to answer me?”

“I might.” She sheathed the enormous blade on her back. There were runes glittering up the sides. He’d seen her liberate that sword from a Vrykul warrior prince when they’d attacked Kel’Thuzad in Northrend, so many years ago. “But it might be more fun to see if you can guess.”

“It might, but not if you’re going to just use my own tricks against me.” The odd thing about speaking with a Knight of Death was how they only inhaled to speak. “This land. What does it look like to you?”

“And under the grass?”

“Yes. People are dirt.” She saw him furrow his forehead and laughed. “Everyone is, eventually. You’ve followed where I led you for years now. Into every struggle. And I always told you, none of it really matters. We all end up dirt, all of us. We’re dust waiting to happen. Everything that exists… you ask why I don’t want to follow her to battle? Because I know how she thinks. Never follow a dead thing to war, Dara. We already know how it ends.”

She crouched, ran her hand through the soil, let it fall between her fingers. “A leader who doesn’t fear Death is bad enough. One that doesn’t care what happens to those that serve her? She’ll spend your lives like water and I’ll be here, watching all my amusement pissed away. All my questions no longer asked.”

“I say nothing about should or shouldn’t, Dara.” She shoot and brushed her gauntlet against the stalks of grass. “But I won’t have what little time I may have left spent on her. I don’t want to lie down yet. There’s more I want to see. Underneath that dirt, there are things we have yet to brush the surface of. Dreams undreamt. Chaos unborn. What she wants, I don’t. I don’t want to get it over with.” She reached out and put her hand on Dara’s shoulder. “Did I ever spend your lives casually?”

“I wouldn’t say casually, no.” He considered. “Perhaps a bit eagerly, from time to time.”

“I wanted to see what would happen.”

“I already know the answer to her question. I am it.” Six shook her head, reached down to her belt for her helmet and slid it over her head. “No, I’m walking south. I want to see what there is down there, where a God tried to kill a World. Maybe I can help, or maybe I’ll get my last answer. Either way, I’m done with this war.”

She clapped his shoulder one last time, smiled. Then she began walking, through the tall grass. Darakka stood and watched until she was just a ripple in the stalks, and then turned away, pointing himself north toward Orgrimmar.