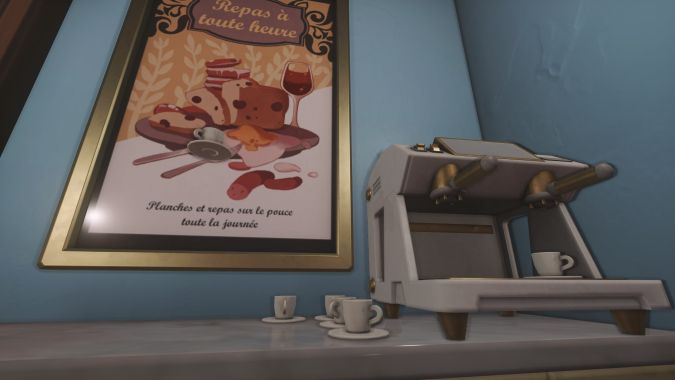 The Overwatch Official Cookbook came out today! I got my grubby hands on a copy, and so tomorrow night over on the Blizzard Watch Twitch channel we’re doing our first cooking stream. It’s packed with tiny lore tidbits, ranging from small details to bigger confirmations. It confirms in print that Jack Morrison had an ex-boyfriend, for instance — they weren’t just “gal pals.” We knew that via context clues, but it wasn’t explicitly stated beyond a head writer’s Twitter account. It also adds in a few small details of the universe that seem pretty irrelevant but are still fun and add some flavor to the universe — Torbjorn’s wife makes a killer apple pie, and is also a chemical engineer. Wait, that makes her a strong contender for Hero 32! I’m going to have to rethink this…

Now I need to clean my kitchen, so while I avoid doing that here’s a Queue.

LOTHARFOX, WHO IS APPARENTLY A JUNKYARD FOX

Blizzard Watch is looking for a new writer.

The first time I applied, my application was a mess, and I definitely didn’t get the gig. However, in trying to pull something together for the application, I realized that this was something I could maybe sorta do… with a little more practice. That led to my (now) long-abandoned baby pet battling blog and youtube tutorials channel. The next time, I didn’t even need to apply — though of course that had more to do with a twist of fate than my becoming a badass writer, hey, maybe it’s a little bit the badass writer thing.

So I’d really encourage you to apply, even if you don’t think you have a shot at landing the role. You have two weeks to flesh out a dry-run piece for the application, and I know just about all y’all Queuefaces can string two or more sentences together. There’s really nothing to lose here. Of course not getting hired hurts and not throwing your hat in the ring can build you a bit of self-insulation against that rejection — well, of course I didn’t get it, I didn’t apply — but I’d really encourage you to at least try it.

It’s also kinda fun to hum the Rocky theme to yourself while you’re blogging, because it’s all a training montage. Of course it took 2 months for Anne to break me of my ampersand habit, but there’s no stopping me now! &&&&&&&&

KALCHEUS IS GOING TO BE AN AH BARON NOW.

Q4tQ: What’s a good addon for remembering what you listed an item on the AH for? I spend half my time researching what I should list items for when I’d rather just use the same amounts from the previous time.

There are a few of them, ranging from relatively simple to needing just like… all the spreadsheets.

Auctionator and Auctioneer are the couple I tend to use when I want something more plug and play. You need to press a little button that says ‘scan the auction house’, and then all the data from current auctions is cached to the addon. You can see in tooltips what each thing auctions for even while you’re out in the world, and you can list things super quickly by setting your preferred margins, etc.

The biggest issue with these two is the functionality is really limited to the last time you searched the AH. Though it does cache info for a lengthy time, you really only see older prices with rarer items that aren’t on the AH. You can see at a glance more easily if someone accidentally priced something just a bit too low and accidentally (or intentionally) set up a wall, but you can’t see longer-ranging analytics, making it harder to tell that, for example, Light Feathers are priced far too low on the WoW Classic Auction House for a spell reagent.

If you want something more data-heavy, it’s time for Trade Skill Master. I use this on BfA a bit, because I have so many — just so many — old mats from previous expansions jangling around in my Garrison, but I don’t want to sell them at a loss, so setting up selling lists to tell me when the margins are good was a real time saver. It has better overall analytics, and you can set up the desktop app to chirp at you when something you have a particular interest in goes above or below a certain threshhold — and yes, it has a full desktop app and yes, you have to use it.

The down side of TSM is you basically have to dedicate an afternoon to setting this thing up the first time you get your hands on it, even if you know what you’re doing. There’s a whole lot of pulling this switch to watch this item, setting up lists and groups of like items, etc. Watch a video or two, read some tutorials, make sure you stretch your legs.

RALEIGH WALSH KNOWS I HAVE TROUBLE JUST THROWING THINGS AWAY!

How do keep you inventory organized in Diablo 3? I have so much crap and it’s maddening trying to figure out what to do with it…..

I play Seasonal and never look at the character again when the Season is over! Whee!

More seriously, though good rolls on specific pieces can be tough to come by nothing in Diablo is really gone forever, except Seasonal Journey sets — though the last couple Seasons have used reissues from previous Seasons, so that may not even be totally true. Every so often I do go through and clear out as much as I can. Do I really need any gear that doesn’t let me min-max into an awesome Whirlwind build on my Barbarian? This one piece that really enables a Hammer of the Ancients build is awesome, but I know I’m never speccing out of Whirlwind. It’s just too fun. And if I do decide to respec I can just Whirlwind my way through demons until I get it back. Easy peasy.

Basically, aside from sitting down every so often and pulling a Konmari on my inventory I got nothin.

Q4tQ: Do you think Sylvanas’s grand scheme involved letting Varian die at the Broken Shore, or was that just a “happy accident”?

A little of both. Oddly, were Varian at the helm of the Alliance I don’t think many of the events that transpired since Broken Shore would change all that much. Even though he was more warmongering than his ultra diplomatic son, he would still recognize that for instance, sending troops to Darkshore would be folly without literal divine intervention. Varian may not have let Saurfang go — he well may have — but he certainly would have freed Baine, and he would’ve lent his full strength to the forces at Orgrimmar too.

But regardless of how the events transpired in this particular expansion, all Sylvanas ever really had to do to best both the forces of the Alliance and Horde is wait. Unlike many other Undead, as a Banshee Sylvanas can just go inhabit another body if this one wears out, and for all her talk of avoiding the inky blackness of eternal death for her people, it was always clear that she’s out for herself first and foremost. Especially now that all the Elven races are mortal, it’s just a matter of time.

Varian being gone is probably good for her but after all, no king lives forever. Luckily for her, she hasn’t for a long time.

“What news do you expect to hear from Blizzard in October?”
I came up with Diablo Immortal, WC 3 Reforged, and 8.3 and didn’t think that was enough.

Any news or announcements in the next month are going to be small things which are splashy and fun, but generally low or no consequence. We’ll likely get a flurry of this toward the end of the month as BlizzCon panels are firmed up, with the things that won’t quite fit the panels but are decently fleshed out and may already have a couple associated graphic assets to fill the gap.

It’s likely we’ll start getting little kernels of news about patch 8.3, but I’d expect what we get there to be more along the lines of, “look at the next ridiculous quest for a mount or pet or whatever,” as opposed to story beats and sweeping systems changes. I would guess both Diablo Immortal and Warcraft 3: Reforged will be discussed during the opening ceremony with, “and you can download and play it, right now,” or else get a release date in late November or early December — WC3 in particular since it was formally announced for “2019.”

We’ll definitely be making hay while the sun shines on all the various Halloween-styled events in all the games. I’d expect a few small announcements out of Hearthstone and Overwatch, with the big banner announcements reserved for BlizzCon. There will probably be a couple breast cancer-related charity cosmetic announcements here shortly — I’d assume Overwatch will run another, maybe a WoW-related one to go with the Gnome Run.

It’s an especially odd time of year for us, because while we’re trying to scrounge up anything that might be a little bit interesting — maybe an addon spotlight? 101 guides? Machinima? — our hair is also on fire getting things planned behind the scenes. It’s a very odd feeling to be both incredibly bored and frenetically busy at the same time.

And now, speaking of being bored and also busy, I should probably go wash some dishes.