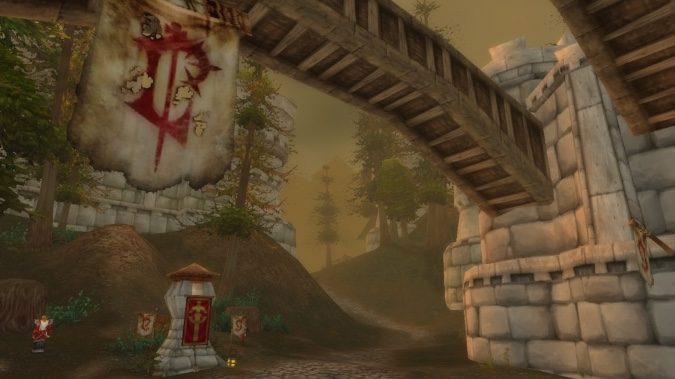 One of the things I really appreciate about WoW Classic is just the fact that all these old quests that were removed in Cataclysm are suddenly back again. Some of those quests contain information that is still relevant and perfect valid even in the current expansion. I may only be playing Classic occasionally, but it’s really nice to be able to hit up those old story threads for a refresher course in the actual game, rather than tracking down all the relevant information on a website, you know? Anyway, let’s get to your questions, shall we?

In Classic, can you do dungeons outside of the levels stated in game ?
Are these only recommandations so you can I do e.g. Ragefire Chasm as 23 ?
Or are they locked by the mentioned “game bracket” ?

I know you just intended a quick answer from the people online at the time, but this is actually pretty useful information for everyone! You can pretty much do a dungeon at any level you want in Classic. However — and this is a big however — you’re not really going to be very effective in dungeons that you aren’t a high enough level for. You’re going to miss attacks, higher level mobs are much more likely to aggro on you from a distance, and it’s overall going to be a really bad time. So I wouldn’t really advise, you know, sauntering into Scholomance at level 40.

Q4tQ: Let’s say Blizzard wants to name an xpac “Return of the Lich King”. Should they, considering its resemblance to the third part of Lord of the Rings (and not that far off from Star Wars’ Return of the Jedi) or should they go with a more awkward “Lich King’s Return”? Or maybe go with Lich King Rises and hope Warner Brothers doesn’t sue?

Personally I’d go with either Rise of the Lich King, or perhaps Rise of the Scourge, if it were me. Mind you, I’m not the person who makes these kind of decisions, but I think it has a certain ring to it. …of course, I also said I feel like the next expansion could be Rise of the Black Empire, so maybe it’s just that I really enjoy the word “rise” in titles, who knows?

But it feels like there’s always been a certain cadence to WoW expansion titles, and I think “Return of the Lich King” doesn’t quite have that same flawless cadence that other titles have given us. I legit can’t explain the cadence thing. It either sounds like “Yes, this is very WoW,” or “No, that doesn’t sound like a WoW title.” There’s no rhyme or reason to it, it’s just a gut kind of feeling.

Yes, I realize I may be really weird.

I know this wasn’t really an actual poll, but I can’t really see anyone being okay with just…leaving Sargeras’ sword sticking out of the planet like that. At the same time, the thing is so large that I can’t really see how they’d get rid of it. I do kind of like the idea of melting it down, but hasn’t Silithus already seen enough in the way of trauma for, I don’t know, an entire host of expansions? I mean it’s had wars, it’s had bugs of unusual size, it’s had questionable cultists, now it’s had a giant sword thrust in the middle of it — when does Silithus just get to chill for a while and be a nice, normal, elemental and scorpion overrun pile of sand and quiet?

Q4TQ: have you used any mount equipment other than the water-walking one?

I think if you ask that question to any class that doesn’t already have water walking in one form or another, the answer is going to be a resounding no. Of course come to think of it, now that people have unlocked flying, that might actually make a difference — but if you’re stuck on a ground mount, a ground mount that can walk on water is far superior to anything else out there. That’s why those pesky water striders were so popular in the first place. I’m really glad that we can make any mount walk on water now, regardless of what they happen to be — I have a pretty sizeable mount collection, and having the option of using anything in the stable is really appealing as far as I’m concerned.

It’s more like the orcish version of “Okay,” or perhaps more accurately, “Okey-dokey.” Basically it’s a term of general agreement or acknowledgment. The word “zug” doesn’t really seem to be found anywhere else within orcish naming conventions, so it’s not like it has any real significance or anything — it’s just the orcish way of saying “Yep, sure thing, no problem.”

I don’t like the idea of Dragon Isles being an 8.3 zone as opposed to its own expansion. Feels like an Argus-type waste.

However, it did give me an idea that’ll never happen: what if 8.3 gave us what is, story-wise at least, the “first zone” of the next expansion? We spend 8.3 getting to, clearing out and raising a foothold in the new zone, then when the next expansion comes out we get access to the rest of the zones.

That way it wouldn’t feel like a waste if they did a fan favourite zone in a patch, and it also ties the story between expansions together more strongly than ever before.

I mean…we kind of saw something vaguely similar in the prelude leading up to Legion — we had some quests, fought off invasions all over the place, and even made a trip to the Broken Shore. I know, that’s not quite the same as what you’re implying, but it’s nearly along those lines. Those prelude events have always kind of taken us by the hand and led us into the next expansion, one way or another. So what you’re suggesting isn’t entirely out of place, when you think of it in that way.

However, you kind of have to look at this from the flip side, too. If we spent a whole patch working on establishing something in a location that we’d never seen before, and then opened access to everything else when the expansion launched…that would kind of be like ending the current expansion on a pretty big cliffhanger, wouldn’t it? You wouldn’t be cutting things off at the natural end of a chapter — you’d be pausing mid-chapter only to resume however many months down the road. I don’t know how satisfactory that would feel to players.

And just to be clear here: I love the idea of going to the Dragon Isles. Do I think there’s enough there for an entire expansion? No, but the fact is we really don’t know what’s out there. The place could be absolutely massive, or it could be just as absolutely small. Given that we handled Argus in a patch, I don’t think I see a problem with doing the same with the Dragon Isles — letting the story play out there however it might do so, and wrapping things up on the Isle in a tidy bow.

This is, of course, presuming that that’s where we’re headed in 8.3. I don’t know if we are — and I have my suspicions (and hopes) that we’re headed somewhere else entirely.