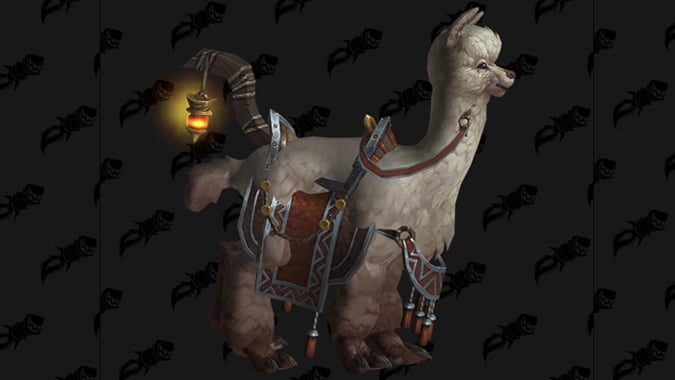 We don’t know where we’ll get them, we don’t know how, but maybe it’s enough to know we will?

In patch 8.3’s content dump of data, Wowhead found several early models of armored Alpaca mounts. Three different color variations were discovered — black, tan, and white — with armored saddles and gear. You’ll note that these are truly early and unfinished models. The saddle armor isn’t properly positioned and is set too low, so that it appears a lantern post is straight sticking out of the alpaca’s rear end. You can also see the neck sash and side blanket erupting from odd places as well.

We first had hints of alpacas being available as mounts back in patch 8.1.5. Wowhead had datamined encrypted sound files for alpacas that also seemed to be linked with an encrypted creature model. Blizzard uses encryption to hide important story reveals from us, so hiding an alpaca model seemed suspect and indicated far more going on there.

Nearly everyone assumed that alpacas would be the Vulpera racial mount if we ever got them as an Allied Race, since Dolly and Dot are everyone’s best friends. However, Vulpera were revealed with the Caravan Hyena instead. We don’t know where these alpaca mounts will come from or how to get them, or even what faction will have access to them. Being included in patch 8.3, we can take a couple guesses.

The most likely guess is that they’ll be connected to the Titan Assaults or maybe even the Horrific Visions scenario. Two factions were datamined and connected to the Titan Assaults in Uldum — the Rajani and the Uldum Accord. New factions generally have mounts so the alpacas could be reputation rewards or perhaps Paragon drops. Horrific Visions will offer rewards for progressing further into the scenario each time, but we don’t know if that means gear upgrades or cosmetic rewards.

It’s kind of weird that they’re not the racial mount for the new Vulpera, but I guess that alpacas are so precious that everyone needs to have them as best friends. Now if only we could have a wagon…