The Queue: There’s a better reality out there, somewhere 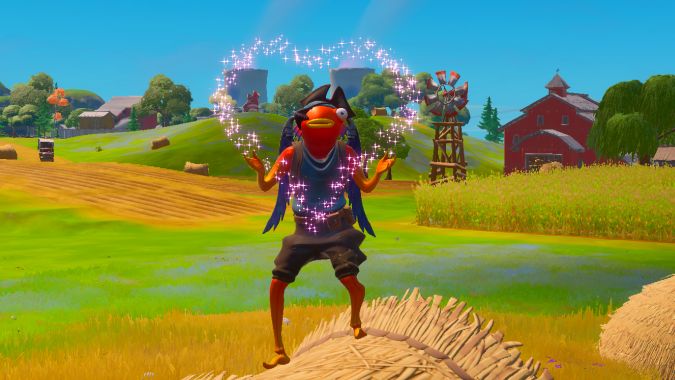 I think I’ve talked about Fortnite enough here (and on Twitter) that y’all know I enjoy the game. And, assuming you weren’t living under a rock and that rock somehow also didn’t get sucked into a black hole, you’re probably aware that the game recently had a world-ending event that led to nearly two full days of the game being offline with no official word from Epic on when it would return.

Well, the game’s back, and the map is brand new — but here’s the thing. There are a couple of areas on the new map with the same name and very similar layouts as the old map. And given the events preceding the black hole, it seems very likely that, canonically, this new map isn’t a new island, per se, but rather the same island as before… but in a different reality. The map is much prettier. It’s a lot more enjoyable. In short, it’s better without feeling too far from the island home of yore. So y’know maybe, just maybe, that means that there’s an alternate reality out there where things are better, brighter, and more fun. I’ll leave it up to you to decide if that’s a comfort.

OMEDON IS AN UP-AND-COMING INFLUENCER:

Q4tQ: What habit/interest that you established or broke in BFA do you hope, (in an extremely inflated sense of your own impact on the demographics of WoW’s data) informs how the game is developed? (Mitch’s note: Further clarification compared in-game activities to “voting with your time.”)

I don’t know if I have a good answer here. What I haven’t done is a lot of what I liked in Legion, frankly. World Quests were great, but with little iteration to them in BFA, I didn’t end up doing them nearly as much as in Legion. And even though I’ve never really been an alt-leveling player, I did far more of that in Legion due to class campaigns. If I’d had the chance to do that in BFA, I would have, but they’re not even existent for me to choose to do (or not do) them, so I’m not sure if that counts.

I’ll be honest, I was really hoping I’d like Island Expeditions more. The idea of unique landscapes that exist near (but still apart from) places we’ve been, just hanging out in the middle of the ocean? And ones that offered a unique experience each time? I really liked the idea of all that. But they just didn’t feel as good as I’d hoped.

Now, Horrific Visions? Those have been a lot of fun so far on the PTR. They’re not quite Mage Tower levels of difficult or unique, but they’re a challenge that I can do solo and try to improve on. I want more Mage Tower style content. I’ll definitely be playing those a bunch.

2BE: Snow Patrol vs Coldplay

Which one wrote “How to Save a Life”? Anyhow, I vote for My Chemical Romance.

WYSIMDNWYG HAS A QUESTION THAT GOES DEEP:

As we all know, the primary source of “character progression” at end-game is gear. That’s a constant that isn’t going anywhere. It even effectively restarts every expansion/patch. Beyond gear, we have things like reputation, gold, mounts, pets, toys, etc. Those other things roll over, so you never lose any progress.

As someone who has played Vanilla and every expansion (albeit with lengthy breaks during most of them), I have characters with a large number of exalted reps, I have hundreds of mounts, nearly a thousand pets, and untold toys. These days the collection items are practically thrown at us.

For those of us with more mounts/toys/pets than we can even appreciate (I have to use random mount and pet summoner add ons to even see most of them), what gets you up in the morning to play WoW?

Follow up: Is it time for a new type of collection item that Blizzard can inundate us with? What would that be?

I play WoW nowadays because I really like pushing Mythic+ content with my friends. Mythic+ nights are some of my favorite nights of the week — they fill the space that raids used to fill, but they’re easier to adjust if someone’s out and easier to commit to only one night per week. I have gone on collection sprees in past expansions, but at a certain point, I got too far behind and realized I’d never catch up. It was depressing at first, but now that I’ve accepted it and (mostly) stopped focusing on being a completionist, it’s a lot nicer.

As for a new collectible, I’d be fine if Blizzard added collectible emotes (like FFXIV has). Less likely but more exciting would be collectibles for a player housing system. The closest the garrison ever came to this was the music box, in my opinion, and I sort of wished everything in the garrison had been more like that. I especially liked the music box because it required me to go back to old places and see the world in order to update current-game content. I know mounts and pets require that, too, but I feel like there are more interesting ways to make that sort of system work than just boss drops. If we got something that could be shown off, could find a way to make us experience old content, and didn’t feel like I was just farming bosses, I’d be all for it. Easy ask, right?

ARTHONOS WILL PROBABLY IGNORE THE FIRST PART OF WHAT I SAY:

I finally remembered to ask this to Mitch!
2BE: Marin vs Malon.

Don’t hate me, but I don’t think I’ve played any of the game with Marin in them. So Malon kind of wins by default.

QftQ: What happens if you fall of the edge of Outland?

Eventually, you land somewhere else. Somewhere strange, but also a little familiar. Maybe you’ve just moved out to Edgeland. Maybe you’re in the Outerland Limits. People know, but they haven’t returned to tell.

RED RESPONDED TO MY CALL TO ACTION PERFECTLY:

Q4tQ: hypothetically speaking, if someone became Vanessa VanCleef’s boy/girlfriend, and decided to start affectionately calling her “VanVan”, do you reckon she would: a) hate it or b) say that she hates it, but secretly love it

She’d hate it. She might even poison and kill you. But when you’re gone, she’ll miss it. And then someone will call her “VanVan” and she’ll get annoyed and tell them to never call her that again, but then when they’re not looking, she’ll turn away, solemnly, and think of you. You and that nickname she always hated.

JUNKERMAGE RC FINDS A PERFECT QUESTION FOR THIS TIME OF YEAR AND ALSO ME:

What is the worst horror film you’ve ever seen? By worst I mean dumb and not scary at all and not even dumb in a good way

So, the very first thing that sprung to my mind was Netflix’s “Open House.” For a while there (and arguably still), Netflix was releasing a lot of “bad but entertaining” movies, and even though they’d get bad reviews, I’d enjoy them in a way because I expected them to not be great. “The Babysitter” was one such movie. Not terrible, but not amazing, and pretty dumb when you thought about it.

But, man, “Open House” was just plain bad. It had no redeeming qualities. I can’t even say, “Go watch it so you can see what I mean” because it’s that bad. It’s not worth a recommendation of any kind. “The Bye-Bye Man” is pretty bad, too, but it’s at least, like, the kind of movie you could watch with friends or over a drink (or both) and make fun of. I think that’s the other movie I couldn’t think of at first.

Why does nobody remember that Xal’atath is free from the dagger and walking around? Seriously, in all the speculation I see for the next expansion, everyone seems to forget that we have some sort of extremely clever and manipulative Old God-type being just out there on her own and clearly capable of plotting all kinds of bad things.

My guess? We’ve had our hands full of a lot of other things, and Xal’atath is doing what Sylvanas used to do really well by staying hidden while she plots. If she’d been freed and immediately tried to enslave/control the Void Elves, she’d be a target. If she showed up taunting us before N’Zoth and Ny’alotha, she’d be a target. But she’s out there, who knows where, not immediately threatening us while the rest of the world very noticeably is dying.

What exactly does an edgeless weapon look like? Is it just a sphere? Would we hold spheres all the time? Maybe get our power from them and only them? And they’d also all be Void Spheres? That’s preposterous and ridiculous let’s do it.

JUNKERMAGE RC CLOSES US OUT WITH A TYPE OF QUESTION CLOSE TO MY HEART:

This little house has just four rooms,
But guests keep running through.
They enter sad,
And exit mad,
If color’s any clue.

That’s my contribution for today! Leave lots of helpful riddles questions for Rossi!