The Queue: Having a hissyfit 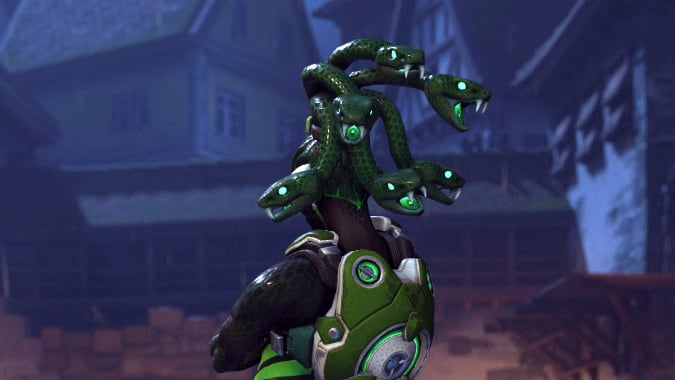 Overwatch really killed it on the Halloween skins this year — I can’t get over Lucio’s hair. Or…well, snakes. Snair? Whatever you call it, it’s absolutely glorious. I can’t wait to see what they pull out for the holiday skins this year, I have a feeling they’re going to be amazing. You know what else is amazing? Your questions — let’s get to answering those, shall we?

QftQ: Who canonically wins the warfronts?

It’s appearing that Darkshore will be lost by the Horde, but what about Arathi? Will the Horde lose there as well? Or gain a new foothold in the Eastern Kingdoms? What do you think and which do you want to happen?

We don’t actually have that information just yet — while the mission table gives us a little background on who is making progress where, I don’t think an official “winner” of the warfronts has been called. I would say at this point that it’s exceptionally likely Darkshore has been taken back by the Night Elves, but as far as Arathi goes…well, it’s anyone’s guess.

I think it’d be pretty cool if the Alliance officially picked up Stromgarde though, given the history of the area — and I’d like it if they could get Southshore back, too. Or at least, you know, the ruins of it. Let them clean it up a little and get the town up and running again, you know?

Follow-up Q4TQ: do you think they’ll announce it (as well as other new class/race combos) for 9.0?

I’m going to look at this from a lore perspective, just because that’s my specialty, here. Technically speaking, we’ve had exactly one Night Elf learn to be a Paladin so far. It’s not something that can just be picked up over the course of a week or two, it’s something that takes a lot of dedication, study, and devotion to the Light to accomplish.

Given that we’ve been embroiled in an all-out faction war — not to mention the destruction of Teldrassil and the warfront action going on over in Darkshore — I doubt many of the kaldorei have had time to do much in the way of studying. They’re busy, you know, avoiding certain annihilation.

That said, I still think it’s likely we’ll see them pop up as an option at some point. Next expansion seems like as good a time as any — and maybe we’ll get some other playable class alternatives as well, too.

Q4tQ: Do you think Blizzard will expand the number of races that can be Demon Hunters in the nexpac?

Okay, but not this one. Look, Demon Hunters are decidedly an “elf thing,” which is why they were reserved for elves. I could see them expand Demon Hunters to both Void Elves and the Nightborne maybe, but that’s about it — and they’d have to have a really good reason for doing so. I mean, the Burning Legion’s been taken care of, why would we need more elves confronting and devouring their inner demons to fight something that isn’t even around any more? Or at least, not around for now, as far as we’re aware.

I haven’t looked into the Alliance bee mount stuff. Is it awarded to you, or do you have to pay a bunch of gold once you get rep?

No gold required! Just a bit of a time sink, much like the little dino buddy Horde players get to foster and raise. In both cases, you’re raising a wee little thing to a big strong adult that will happily haul you around wherever once they’re fully grown. I’m still a little bummed that the bee is faction-restricted after you get him, but he’s a cool mount regardless. I just wish I could ride said bee on all my characters!

Do you think it’s naive of me to hope that this year the Virtual Ticket will have video-on-demands up the same calendar day the panel takes place?

Not at all! Honestly, last year was a little weird — usually the VoD’s are up within the same day. I’m not sure why it took so much longer last year, but I’m hoping that this year will see a faster turnaround. So if you’re naive, so am I, but I don’t think either one of us are.

At any rate, even if they don’t go up same day, I’m assuming they’ll be up by the following day. Blizzard never makes us wait too terribly long with the things, especially since people are paying to watch them!

Do you think we are getting any more allied races this expansion or are the Vulpera and Mechagnomes the last we will see until next expansion launches?

I think we’re done with Allied Races when the Vulpera and Mechagnomes are added — and I don’t mean for this expansion, I mean altogether. The whole reasoning behind an “allied” race was that they were joining up either to help us out with the faction war, or because we helped them out while we were in the middle of said faction war. With that faction war supposedly “over,” there’s not really much of a reason to look for more allies at this point. But hey, we made out pretty good, didn’t we? Ten new races to play total — we nearly doubled the amount of playable races to choose from over the course of a single expansion.

Does that mean no new races next expansion? It’s possible. I think we may be looking at new race/class combinations, and maybe a new class if Blizzard comes up with something better, but I think we might be done with new races for now. Or if we do get a new race, I’m hoping it’s a proper new race with a new starting zone and quests and a capital city and all the bells and assorted whistles that go along with it. Don’t get me wrong, I love the idea of Allied Races and I love that we’ve got so many options now, but I kind of miss the days of playing a level one through a brand-new zone and figuring out just where that little guy came from, and who that little guy was going to be.

If they add anything beyond that, I’m sort of hoping maybe it’ll be along the lines of Allied Races, only just a cosmetic option you can choose, instead of an entirely new character to level. Honestly, more character customization all around would be cool. I don’t really want to level a new character all over again — but I’ll happily blow piles of gold on things to tweak my main’s appearance.