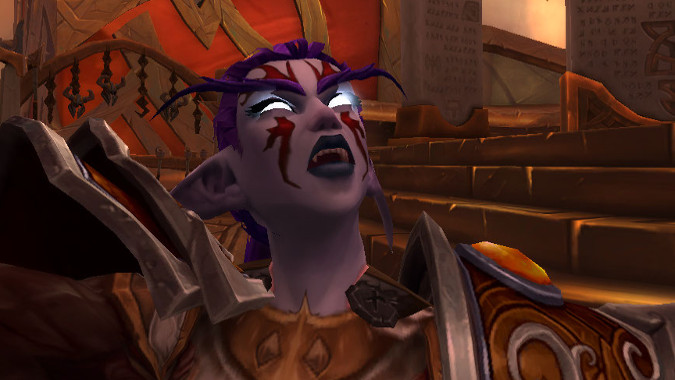 If you’ve never had a small kid you may not know the incredible breadth of activities that goes on during Halloween. We’ve gone to the pumpkin patch, we had events with candy in the trunk of our car, we had to bake some gross-looking food for Girl Scouts, and this weekend we’re going to the train museum’s Halloween event, because why not!

The good thing is, most of this was planned in advance, so we have all our ducks in a row. Yes, being able to plan things in advance and get organized really helps things move more smoothly when everything else is chaos. Things like schedules are nice to have, for instance. Yep, scheduling things is good. Always useful to have a schedule.

Let me just reschedule all the BlizzCon planning meetings we missed over the past 2 weeks now that the schedule is finally out and let’s get to Queuein’.

ARTHONOS HAS A SWORD OF DAMOCLES HANGING OVER THEIR HEAD

Q4tQ: During the 8.1.5 war campaign cinematic, when Baine returned Derek Proudmoore to Jaina, a lot of people called attention to the shot showing Derek having a dagger on his back. They immediately called it a “Chekhov’s gun”, yet here we are nearing the end of the expansion and it hasn’t come back into play, no signs of him double crossing or stabbing anyone. Do you think players were wrong and Blizzard just had the dagger as a red herring? Or is there a possibility it will come into play later on, in which case Blizzard will be breaking the rules stating Chekhov’s gun should go off no later than the 3rd act?

WoW doesn’t generally follow a narrative structure similar to week-by-week serials. Even counting each expansion and iteration as its own separate book in the series, we’ve seen narrative threads carry through only to be dropped unceremoniously, and we’ve seen tiny hints several expansions back evolve into major foreshadowing for the entire series — The Puzzle Box of Yogg Saron, seriously? At this point we have dozens of varied important weaponry just lying around — especially after Legion — just waiting to be used in assassinations. What ever happened to Gorehowl?

In this particular instance, if the Kul Tiran Candidate does happen to murder the heck out of Jaina, I could see it happening as a part of the final storyline of the expansion. Depending on how it plays out, it could put a bow on the story of Jaina, but it could also lead to even more political intrigue as we try to figure out who could’ve done such a thing. However, it could also be that the person who holds his Queen of Diamonds is otherwise indisposed for a while, and as a result we don’t see this particular thread come to light until next expansion, or the one after.

Honestly though, the way these scene is posed, the weapon is shown while Derek talks about himself as a weapon. That’s it. That’s the symbolism. I don’t think this is foreshadowing the fact that he actually is a double-secret brainwashed sleeper agent. That’s one too many twists, even for Blizzard.

KALCHEUS WANTS TO BE IN THE ROOM WHERE IT HAPPENS

Q4tQ: Who is the Peggy Schuyler of this year’s BlizzCon, Hearthstone or SC2?

Heroes of the Storm. Work.

They’ve put out several small “bonus” news updates over the past couple weeks — and starting a half an hour ago when this post goes live — they’ve announced a livestream to their Twitch channel using the same exact teaser graphic they used for the D.Va reveal years ago. What do they promise from this livestream? And I quote, “🤔” We know now that this is the reveal of Deathwing, which is kinda bonkers this close to the con.

StarCraft 2 would otherwise be my guess. It looks like they don’t have a “What’s Next” panel scheduled while Heroes does, though.  Hearthstone almost certainly has an expansion in the tank, at minimum — they’re so consistent with their content delivery you could set your watch by them at this point. But having a major livestream event less than 10 days before curtains up? Something tells me Heroes of the Storm is the Peggy here.

HUSS’KIES MAY BE SICK OF RED AND BLACK KEY ART

Q4TQ: Would it be possible to have a Diablo game without.. Diablo in it? Are they doomed to always make Diablo come back because the game is literally named after him? Does it bother anyone or are you always happy to see him as the big villain?

I thought his revival in Diablo 3 was more than a little a little contrived. Get the thing, in order to get the thing, in order to let Steve Blum chew the scenery for a while, to get the thing, and now tada, Diablo! But after the events of Diablo 3 I’m really invested in seeing whether there’s a way we can bring Leah back. If the dev team says, “nah, Asmodan is going to be our big bad in this one,” back up because I need more Queue space to draw a circle of salt and light some candles because I am trying to save Deckard’s beloved niece. She’s my niece now and I’ll do anything to protect her.

I didn’t really have any investment in Diablo himself per se up til that point, other than the fact that he’s the big bad so we gotta kill the big bad. But now I’m very invested in seeing this plot thread through. Basically, we have to summon Diablo to even try to get Leah back, and if that accidentally makes me the big bad of Diablo 4, well then y’all better hope I drop legendaries.

JALAMENOS, OF LAST LIGHT IS ALL ABOUT THE BARBER SHOP

Q4tQ: If they gave Death Knights more customization options to get them more in line with Demon Hunters, what would you like to see as options?

I’d like to see them just steal everything from the Kul Tirans. There are definitely Death Knights with those clouded-over eyes like the Kul Tirans, or the rheumy ones like Derek Proudmoore has. I’d bet they also have some gnarly wounds across their faces and bodies, if not scars like the Kul Tirans as well. When you’re a depressed unstoppable killing machine, it’s inevitable a sword or two gets through every so often. Maybe a few are missing ears, or had to staple a body part or two back on.

I’d also love to see more makeup options across the board, but especially for Death Knights. They’re the original emo kids, they definitely need some heavy black eyeliner, and also the Sylvanas-esque tear-streaked heavy black eyeliner. If you can’t look good while you’re committing murders, why bother.

KALCHEUS IS LOOKING FOR A JOB OPENING?

Q4tQ: If we do return to Northrend in the nexpac, do you think any lore figures will get the DK treatment? And do you think they’ll keep the Four Horsemen that were rezzed as DKs in the class hall campaign?

It’s hard to really narrow it down, because we all know that in WoW dead doesn’t really mean dead. I doubt we’ll see Varian as a Death Knight, but they could always invent an Order Of the Ashen Pile just to bring him into the fold. Other than that, nearly anybody else is fair game. Tirion? Yeah, he was laid to rest in sanctified ground, but that just means we get a heist mission. Garrosh? Third time’s the charm. Thrall? He’s not technically dead yet, but time makes fools of us all.

In terms of who I’d like to see DK-ified, the only one who comes to mind for me instantly is Amber Kearnen. Not necessarily because I want her Death Knight-ized, but because she got one of the lamest deaths we’ve ever seen from a character that’s been hanging out with Rogues since WoW launched in 2004. Bring her back .

I do think they’ll keep the Four Horsemen, and I don’t think they’re going to explain their presence or anything like that. The Horsemen themselves may have some conversation text about the ordeal but it’ll mostly be handwaved.

Q4TQ: is “I licked it, therefore it’s mine” a reasonable rule to live life around?

Only if “finder’s keepers” isn’t a part of the deal. Let’s just say I got up to some suspect business while I was in college and I want none of that mess boomeranging back onto my doorstep.