What do you do for Hallow’s End and Halloween in WoW? 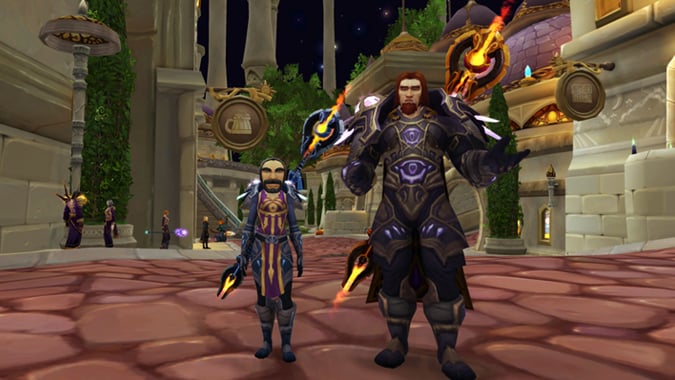 Every year, I dress up as Rhonin. It started out as a joke and trying to annoy my friend right before Warlords of Draenor came out. He was leveling up Fishing in Dalaran and unfortunately that must have been when it went cross-realm or something, because Rhonin kept getting quest turn-ins from players that would activate his infamous speech. My friend was fishing out of the fountain right next to Rhonin’s spot and had to listen to his speech approximately every four minutes… for hours.

So naturally, I decided to capitalize on it. I innocently suggested that everyone dress up for a Halloween raid and then I showed up as Rhonin, complete with a 7-macro speech of all his lines that I could yell in order. Halloween and Hallow’s End were just the catalyst for my prank, but now it has become a tradition every year to dress as Rhonin and find a Human Male Mask to annoy my raid on Halloween. I change my hair color to red to match him, and I don the mask just because it looks so ridiculous and makes me laugh. It’s a little less effective now that I’m a Blood Elf instead of a Human, but that won’t stop me.

This year, I’ve also been having fun rocking the witch outfit since Hallow’s End started because the Wikket Witch’s Hat just goes so well with the Nathrezim Acolyte’s Robes. And it’s fun to zoom around on the Magic Broom dressed as such. It makes me feel a little more into the spooky spirit of the holiday. However, come Halloween, you can be sure I’ll be dressed as Rhonin, as is tradition.

So what do you do for Hallow’s End and/or Halloween in WoW? Do you have any traditions for the holiday or favorite transmog to use?