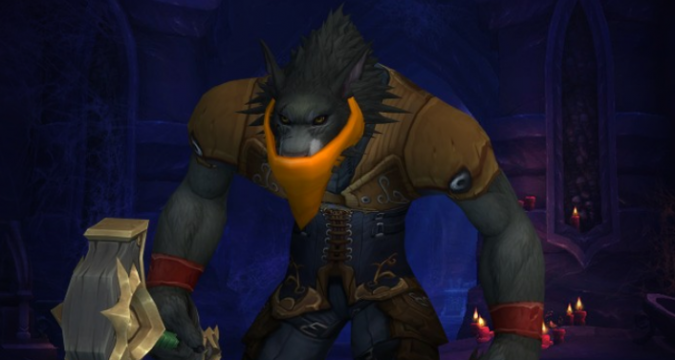 This character profile has been written for Regor, one of our supporters. If you enjoy it, you can check out the other profiles we’ve written, too!

“I’m perfectly content at the moment.” He felt his muzzle curl into a smirk. The big Kaldorei woman, tall even for one of the Night Elves, shook her head. He was glad she was wearing that helmet so he didn’t have to look at her eyes. “Now, if we’re talking unresolved anger…”

“No, the other one. The one that means you lack reason and sanity.”

“Do your people know the expression about pots and kettles and color?”

“First off, I personally killed Admiral Ripsnarl. Cut his head right off.”

“Even if I believe she’s alive…” She shook her head before he could speak. “Even if, she’s a maniac who had her own adoptive parents killed…”

“The Saldean’s are still alive and well. I just bought some chicken feed from them last week.”

“Why are you buying chicken feed?”

“To feed chickens?” He let his tongue loll out of his mouth at the expression on her face. “I swear, Scyth, you ask some strange questions. What else would I buy chicken feed for?”

“What else is there to do?” He gestured at the returning troop ships, visible out the window. “King Anduin went and canceled our war.”

“I serve Tyrande, not the Lion’s whelp.”

“See? You and Vanessa aren’t very different at all. She lost people she cared about, and she thinks the Wrynn family are assholes, too. You should come along. Maybe there’s a place for you in the Defias, too.”

“I have chosen who I serve.” He was less than happy when she took off the helmet with those black, backwards twisting horns she’d ripped off of a Dreadlord on the Broken Shore, because it meant he had to look at the pitiless black orbs she now had for eyes. “For me the war will never end, Regor.”

“See, I appreciate killing the grave-haters. A man’s gotta know when he’s dead, you know how I feel about that.” He considered signaling to the hostess, but he didn’t feel like pushing the curse back enough to drink from a stein and getting her drunk was an exercise in futility. “And I’ve no love for her.”

She nodded. It had been the basis of their friendship, really. Both of them really enjoyed killing Forsaken.

“But you need more to your life than just revenge.”

“If na, then what’re you doing here?”

“Trying to convince you not to join up with a criminal organization.”

“Those are the best kind, love. Besides, you haven’t seen her in action.”

“Oh, right, I forgot, you killed Ripsnarl. Poor fella. What did he ever do to you?”

“By that point he’d tried to have me killed several times.”

“Oh, I suppose that’s fair, then.” He clicked his long, claw-like nails on the tabletop. “Look, I appreciate your concern. Big lass with a sword like you, there’s plenty else you could be doing than trying to talk me out of this. Lots of people to go chop up.” She was wearing that black and gold armor he’d never seen her out of, a giant sword across her knees. “Are you sure you don’t want a drink?”

“You drink in that form?”

“Not easily. I kind of stick my whole face in and… yeah, it’s easier when I’m less furry.” He finally decided to go for it, pushed back the curse, felt himself shifting. It was always a bizarre feeling, the melting away of everything he’d become, the resumption of a life he didn’t really live. “What’ll you have?”

“Nothing. But I’ll get you some wine.” He gestured to the hostess, a rather lovely young Dwarf who kept her hair tied up in two elaborate braids. After he ordered, he turned to see his guest fidgeting, looking down at the blade in her hands. “When was the last time you put that thing down?”

“I was unconscious after they pulled me out of Darnassus.”

“Aye, that was…” He shook his head. For him, Darnassus was a lost refuge, a home away from the home he’d lost to the grave-haters. The Forsaken, he snorted in derision. A bunch of shamblers who set his home to burn and acted surprised no one wanted to be around them. He could still remember fighting in Silverpine, working for Old Man Crowley. Before the curse, before the retreat. He’d seen the old dog’s daughter Lorna when the demons had returned, had fought under her command and been damn proud to do it, too. Even caught a glimpse of the old Greymane’s daughter Tess a few times, could you believe the old son had her up in arms? Planting daggers in them what needed it. You wanted to talk madness, there’s madness for you and no mistake. “I won’t patronize you with the ‘I’m sorry’ song, I’m sure you’ve heard it.”

“See, though, that’s what the Uncrowned are all about. Someone’s gotta watch the folks in power, keep them from getting airs. Anduin seems a nice enough boy, sure, and maybe he’d have been a good king someday. But now? This peace? It’s madness to trust them. The walking dead, cannibal tusk-talkers, and the Orcs? My pappy’s in his grave from what they did when they marched on Lordaeron, but sure, let the lad palaver with one for a few minutes and he’s all smiles.” He made sure to stop talking when the hostess returned, paid for their drinks with a Dalaran royal obol, one stamped with Jaina’s face. He wondered who they put on their coins now that they’d run her off. Maybe Khadgar, his big old jaw surrounded in a circle made Regor laugh in the imagining.

“The VanCleef woman is dead.”

“That’s just what she wanted everyone to think.”

“Then is she going to be pleased with you going around babbling about it not being so?”

“Well, I’m trying to recruit you.”

“You’re trying to recruit me for an organization you haven’t joined, on behalf of a woman who is either dead or, if she’s not dead, wants everyone to think she’s dead and who hasn’t even let you join yet.”

“When you say it like that it almost sounds silly.” He lifted his stein, gestured towards her. She took one hand off of her sword to drink the wine, grimaced. “Not to your liking?”

“Dwarven wine always tastes like they got impatient a few hundred years into the process.” She still drained the glass. He watched her grimace again, then shake her head and lift the helmet and place it back on. “I’m going to go. I’m needed back, Maiev has orders. I can’t talk you out of this?”

“I was just going to say the same to you, lass. You know your High Priestess is trusting a woman who tried to kill her a few years back?”

“You’re asking me to join a woman who tried to kill me a few years back.”

“Take care, then, Regor. I hope you get whatever it is you want out of this.” He nodded, kept sipping his drink. Watched her walk out, shook his head, and let the curse take him, felt the by now familiar rush of fury as it settled over him, his muzzle returned, his senses keen once more. Sadly this meant he could really smell just how bad the ale he’d been drinking was, and wrinkled his snout at it.

If you’re already a supporter, click here to submit your character info to have your own profile written.