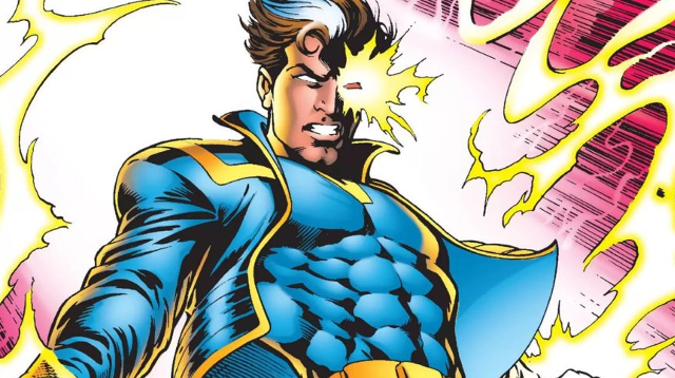 In the 90’s X-Men storyline Age of Apocalypse, the son of Charles Xavier, David Charles Haller (a psionic mutant with multiple personalities who went by the name of Legion) traveled back in time to before his father and Eric Lehnsherr, the mutant known as Magneto, had their falling out. Legion intended to kill Magneto before he could become the super villain who fought his father so many times, but instead he accidentally killed his father, altering the timeline and removing himself from existence in the process.

In the altered timeline that resulted, the mad geneticist Nathaniel Essex took the DNA of Jean Grey and Scott Summers and used it to create a perfect mutant, one with psionic powers so great he could kill En Sabah Nur, the mutant madman who ruled that alternate Earth as Apocalypse. When the timeline was reset, Nate escaped that timeline and ended up in the 616 Marvel timeline, where he made friends with Peter Parker and Franklin Richards and even got into a fight with Cable, who was also a mutant bred by Nathaniel Essex (also known as Mister Sinister) by tricking Scott Summers into marrying and having a son with Madelyn Pryor, the clone of Jean Grey.

This is relevant to today’s Queue, I promise.

Q4tQ: what do you think the gnomish language sounds like?

I’m asking because I’m planning to make a mechagnome warrior when they’re available. I’d like to give her a name that means “buzzsaw” in a different language (because “Buzzsaw” isn’t available on my server; I checked). But I’d also like it to sound gnomish. So I figured I’d use an online translator, but I’m not sure which language to use.

According to Wowpedia, gnomish might not be widely spoken in Azeroth: “Hearing them talk in their native gnomish will help you realize why no one takes the time to learn it aside from gnomes.” So what language do you think I should translate into to get a gnomish-sounding name?

For Gnomes, I would go with Finnish, myself. It’s an interesting language and not one that gets used as much in fantasy games. The word buzz in Finnish is sirinä, and the word saw is saha.  So Sirinäsaha would work, if you were of a mind to use Finnish and then jam those two words together in a non-Finnish way.

RANDOMGUY67 MENTIONS SOMETHING I FEEL PRETTY MIXED EMOTIONS ABOUT

Nooooooo… they’re taking away my Brontosaurus mount in Shadowlands and making it BMAH only… I don’t have 5 million gold yet!

I always knew from the very beginning that there was absolutely no way I was ever going to get that mount. So I’m not sad. But I am disappointed in the decision, because I don’t really understand why. I don’t recall them ever taking out a gold sink mount like this. And I’m really sad that I’ll never have a Brutosaur I know what I said earlier but you know what, I was wrong, I am sad about it.

But I honestly don’t care about having an AH mount, so maybe I’ll get lucky and they’ll put another Brutosaur mount in the game at some point.

Is there any info out there confirming if Mercy’s wings are permanently attached to her or not? I was playing some OW yesterday and got her in Mystery Heroes (I don’t play her that often normally) and had the breast cancer skin on which shows her wings seemingly just built into her back like some kind of cybernetic enhancements. And her new doctor skin has them off her jacket which looks too loose to support wings on its own if there’s not some kind of harness underneath.

I know most of the skins are probably considered non-canon but with so many other characters having prosthetics and cybernetics I was curious about her.

According to the short story Valkyrie, the wings are part of the armor. I think with skins you just kind of have to go along with it. They take some creative license with those.

So years ago there was an X-Men story named Age of Apocalypse. It was more of an alternate reality than Shadowlands, but it got me to thinking… characters escaped AOA into our reality, so who do you reckon may do the same from Shadowlands? I know we have lots of new characters to meet, so we’ll keep the speculation to known characters.

The Age of Apocalypse was much more like Warlords of Draenor than it is Shadowlands — in it, the son of a famous figure goes back in time to change history and inadvertently screws it up and makes it even worse, and he dies because of it.

I’ve written an entire Breakfast Topic about how they might use Shadowlands to bring back famous dead characters. Part of me wants to see Deathwing come back, because man, I feel like that dude would just irritate a lot of people. Even better would be if all the Dragon Aspects who died came back, and Deathwing comes back as Neltharion and is good again. That would be amazing.

“I understand your fears, but I am Neltharion, the Earth Warder, and I mean you no harm.”

Q4TQ: what do you think is the most antithetical race/class combo in WoW?

I’m rolling a Lightforged Draenei DK because the idea of a being who is simultaneously empowered by the Light and by Death is very amusing to me.

But I think my vote still goes to Forsaken Monk. It must be especially tough for a being filled with nothing but dread and loathing to be able to become all zen and reach inner peace.

Gnome Warriors are fun. “Yes, I am three feet tall. Yes, I have two giant swords. Yes, I am going to kill you with them.”

I kind of like the idea of Forsaken Hunters for a similar reason. The idea of a rotting corpse that just wants it so badly that they can tame animals amuses me greatly.

And of course there’s Blood Elves doing anything that isn’t magical, like a Rogue or a Warrior. That just feels like you’re rebelling against everything your people stand for, and I’m down for that kind of quirky individuality.

“You mean, you can’t cast any spells?”

“I know this one spell where these daggers just vanish and reappear inside someone’s kidneys.”

Okay, that’s the Queue. I still think Warlords of Draenor was the closest WoW has gotten to the Age of Apocalypse. I’d say Shadowlands was more like  the DC Blackest Night storyline.

Blizzard Watch is made possible by people like you.
Please consider supporting our Patreon!
Filed Under: Nathaniel Grey
Advertisement