The Queue: Red, the blood of angry men 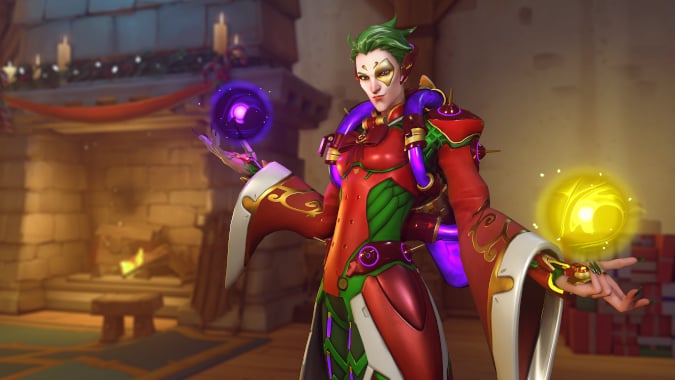 Thanks to y’all I’ve had this song stuck in my head all day so now you also have to suffer through The Queue. This is that Queue, where we answer any burning questions you may have, whether or not they’re related to Blizzard games. More Blizzard games are better, but hey we all have to go off book sometimes, right?

Allied Race and Pandaren DKs are coming in patch 8.3, as part of the pre-order bonus for Shadowlands. However, technically, the events from the Shadowlands cinematic (Sylvanas defeating Bolvar) haven’t happened yet.

Q4TQ: how do you think the new DK scenario will play out? Will 8.3 contain a new zone with their new starting experience? Will the events in that zone happen with Lich King Bolvar?
What reason do you think he’ll have to decide to raise the new DKs, and how will those DKs join the Alliance/Horde?

It’s likely we’ll see the current starting zone — including the amazing little pony you should always choose to be your Deathcharger — given the axe until it shows up in WoW Classic.

My thought is, we’ll see a scene kind of like the current Undead starting zone in an instanced version of Icecrown. I don’t think we know yet the mechanism Bolvar uses to raise Death Knights yet, but I’m sure the new Death Knight experience will begin with some cinematic version of that raising process, at which point we’ll have to prove that we’re good to go in combat to both Bolvar and Darion Mograine. I will say that this seems like one of those places where gameplay trumps story — we as players need to learn that this ability does this thing, but I’d guess that at this point Bolvar and Darion really just need warm bodies to throw at the situation. Well, warm bodies might be a little insensitive, but you probably get what I’m going for here. We’ll probably spend more time with Darion than Bolvar, because Bolvar spends most of his time brooding and smoldering.

I am really curious as to where they’ll be getting the bodies from, in a similar vein to the current Undead starting situation. There is zero reason to drag those corpses all the way from Hillsbrad to Deathknell. I don’t think Sylvanas missed the memo that Val’kyr can fly. And yet. Similarly, while there’s an ample supply of dead bodies up at Icecrown, they’re all races we already had available as Death Knights. Where are they dragging these random dead Pandaren from? Did they like, set up a supply line of dead Kul Tirans with Jaina? Is Meerah’s cart actually full of her dead brethren on their way to be raised? I know they’re our allies and all now but still.

I uninstalled Euro Truck Simulator 2 last night because I haven’t played it in several months.

…I’ve never wanted to play it more than right now.

You know, I only very rarely fully uninstall games, but I should really do it more often, especially with games which have some kind of cloud save feature. I tend to only go HAM on Overwatch during events in the League offseason to get skins and that sucker takes up a ton of hard drive space. Truck Sim not only has the Steam backup, but you can also hook your accounts into their proprietary online mode so there’s doubly no reason to have it if you’re not actively playing.

I’m not sure I’d trust something with more creative building modes etc to the cloud, but something like Truck Sim, eh, I should probably uninstall that. I’ll get around to it eventually, probably.

Q4TQ: for those of you who have tried low-carb diets, does the lack of carbs make you feel tired or fatigued?

Yup. Refined carbs are high-burst energy — think sugar crashing — but even the slower burn carbs like oatmeal or brown rice get processed faster by your body than a lot of other food types, so they help bridge the gap until your body starts processing the proteins and whatnot. Carbs also contain a lot of energy in a small space so you need to consume more to feel full, which is what those ‘100 calories of broccoli vs 100 calories of ice cream’ graphics are intended to show.

I will say that, having been a vegetarian for over a decade, eating meat leads to a very similar sluggish feeling as those times I tried no/low carb diets. Low fat was a breeze for me for the same reason… chips are technically vegan but most vegetarian food is low in fat to begin with, so that wasn’t the big change low carb was. I will say that when I was on a medically restricted as-little-fat-of-all-types-as-humanly-possible diet I felt okay for the most part but had cravings for bacon cheeseburgers with softboiled eggs, and I had to will myself to not just lick the butter in my fridge at one point. Who’s gonna know if I just lick it a little bit? My gallbladder. My gallbladder will know.

In general, any big diet change you make in a short amount of time will have your body flipping out. It thinks you’re a nomadic hunter-gatherer, and that cache of berries you found was really plentiful and tasty, and it’s not sure that this deer you were able to spear is going to be enough to sustain you it’s going to try to make you backtrack to those berries so you stop feeling so awful. But humans are a tenacious, enduring species, so you can keep on spearing deer, or eating a whole lot of chicken or whatever, until your body’s with the program.

AUSSIEEEVEE ASKED IN OUR AMAZING DISCORD

QFTQ: Do you choose what you do in game based on it’s rewards, or do you do it because you enjoy it? Why? Why not?

I haven’t played a ton of Overwatch in the past couple months but I needed that Ugly Sweater 76 skin. So I set out to get it, allowing my Planet Zoo zoos to languish before the new DLC dropped today, not exploring the new map or checking out gunsmithing in The Long Dark, letting the corpses pile up and go un-defiled in Graveyard Keeper. It took me until last night to finally get all 9 wins for the skin, in part because I’m rusty and in part because I was playing Mystery Heroes to re-familiarize myself and even if you’re fresh that’s always subject to RNG.

But, I did it and it’s done… until I have to go HAM this week and next, for holiday skins for characters I actually enjoy playing. At this rate my peafowl are going to overrun the zoo.

So yes, I’ll frequently play things just for the rewards even if it wouldn’t be at the top of my list otherwise.

ASKED FOR THIS, MYTHRIAK DID.

Q4tQ: How long do you think it will take for we to get a Baby Yoda reference in WoW?

All-encompassing, the pop culture zeitgeist is. Soup-sipping item or toy I would want it to be, but animation work that would take. Wandering Goblin mini NPC we should expect, yes, and with it perhaps helmet-wearing man. But expect it, yes I do.