The Queue: A mysterious crunch 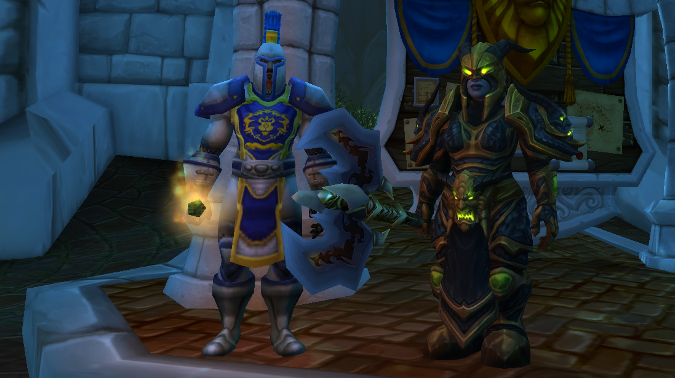 That’s it. I don’t have anything else here. Let’s do the Queue.

Q4tQ: How many hours a week of game play do you think WoW should be designed around for keeping a character current?

I don’t think there should be a hard and fast “you must play this many hours to be able to do dungeons with your friends” number in WoW. I’d rather we just play as much as we want to and the game makes it possible for you to see most, if not all, of the content. Some stuff like Mythic Raiding, M+ Dungeons, Rated BG’s and Arenas can exist for the people who want to invest a ton of time and effort into the game.

I realize I’ve fallen out of step with the way MMO’s work, because while I absolutely love the leveling stuff, and World Quests, and other content that I can take or leave at will, other players like a more focused experience. But I’m okay with it, and I like that WoW allows me to gear up pretty well without raiding or running dungeons until my eyes bleed. I’m not pushing 450, but I’m pretty close to 400 on my new pally, and that’s pretty good.

What’s your “You HAVE to watch this” movie or series ?

We all get stuck on Netflix, HBO, Viaplay (that’s your Hulu more or less)
Checkling IMDB. Starting the show. Nahh, that’s not for me.

Do you have a gem to recommend ?

Event Horizon or The Iron Giant, depending on my mood. Dark City and Ladyhawke are in the running, too.

What PS4 game should I play first in 2020? Presume I own your favourite and I haven’t played it yet.

Either Assassin’s Creed Odyssey or Horizon Zero Dawn. I’ve just finished HZD and I really love the story, it’s got a lot of emotional weight.

as a one-character player, i’ve never understood alts. i mean, i DO, and i DON’T. i get all the reasons people say they roll them, but i’ve never been a fan of them because (1) i can’t fathom the time needed to play them all, when i can barely manage the one i have, and (2) i have long felt that they are detrimental to the community. hear me out: for me, if i need something that an engineer makes (for instance), i just ask in our guild if there’s an engineer who can help me. this fosters community to me. i don’t just hop on my engineer and thus remove any need to socialize with anyone else. sure, having one in my roster is more convenient for me, but i really don’t mind asking around for a friend to help me. with most people having an army of all the things, nobody needs to reach out to others to get things and get things done.

I have a few alts. I mean, technically, I have as many alts as you can have, but most of them are Warriors I leveled to a certain point and stopped, either because I had friends on that server back in the day or because I was bored and I like Warriors. Anyway, my point is, I do that kind of thing. It probably isn’t your kind of thing. And I know you were just saying that it doesn’t make sense to you, not that no one should do it, but I do want to cover your idea that too many alts hurts community.

I have never cared.

If people in my guild are cool people, I’ll talk with them and help them with stuff. Otherwise, I’ll go buy stuff on the auction house. If community only thrives when people are desperate to get that item they need and will therefore make nice to the guild’s engineers to get it, it isn’t really a community at all. It’s just people trading favors.

I’ve done numerous in game achievements that I had absolutely no desire to do, not because I needed anything, not because I felt I had to in order to foster a sense of community, but because these were my friends. I don’t feel like me deciding to have six alts at level 120 to cover most crafting professions in any way hurts the in-game community, but even if I did?

I want to have those characters. So I’m going to.

Again, I get that you were just speaking for yourself and that’s fine. If that’s how you prefer the game? More power to you. But I’m happier when I make my own community, not feel beholden to it.

Okay, that’s the Queue, the first one of 2020. Hopefully this year could be a bit more gentle.

Blizzard Watch is made possible by people like you.
Please consider supporting our Patreon!
Filed Under: Auld Lang Syne
Advertisement