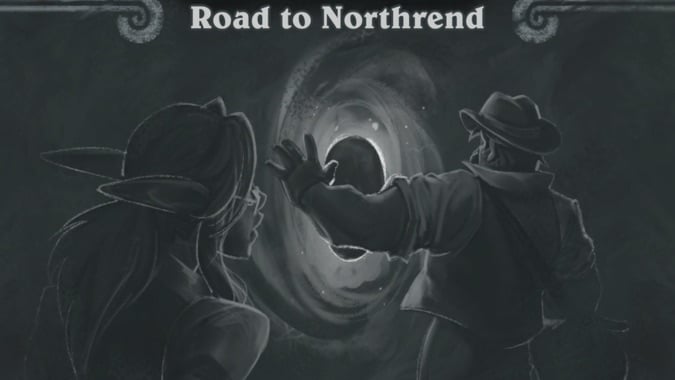 Because Reno Jackson is involved, it’s a little complicated. You see, the League of Explorers is chasing Rafaam and his League of E.V.I.L., and they’ve asked their resident Mage — that’s Reno — to teleport them to Northrend. Unfortunately, Reno’s attention to detail is pretty low, so you wind up hopping from place to place for a while before you get there.

That means you get to brawl through eight bosses, dungeon run style, until you finally land in Northrend — and go on to Galakrond’s Awakening. There’s plenty of amusing dialog as you go, continuing Hearthstone’s bizarre storyline.

In short: it’s a fun Brawl and it’s not too hard to win. It’s well worth playing through at least once. 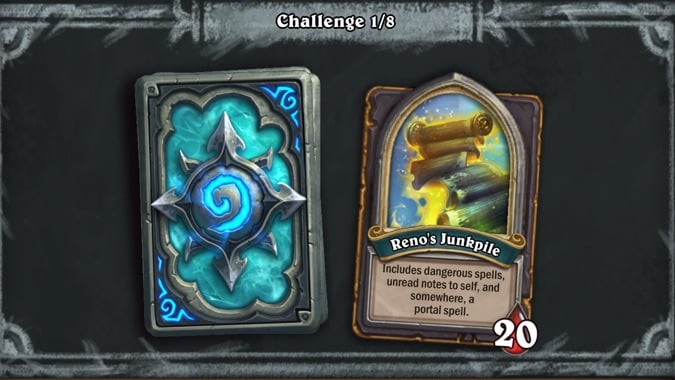 Description: For the final conflict against E.V.I.L., Reno Jackson must conjure a portal to Northrend! If only he knew how…

This is another dungeon run, pitting you against eight bosses that you must fight through to victory. (Though you only need to defeat one to earn your card pack.) As is usual with this format, you fill your deck with new cards and treasures as you go, becoming stronger and stronger — until you wind up on the shores of Northrend.

Start by taking your pick of League of Explorers heroes, who are just the same as they were in the Tombs of Terror adventure (though you can’t pick out your hero power). Each hero has a pre-constructed deck packed with treasures from Tombs of Terror, and they all feel pretty strong.

While the typical dungeon run is rather unforgiving — the RNG may give you good cards or terrible cards, and when you lose, you have to start over — this Brawl feels like the difficulty has been toned down. In my experience so far, I haven’t seen any card buckets or treasures I felt were terrible, which made it pretty straightforward to build a winning deck. Plus, if you ever lose a fight you just go back to Bob’s tavern, where you can customize your deck before trying again.

The toughest part of this Brawl is the final fight, where you dual with one of your fellow League members. (Why? Who knows!) This fight is styled after Rastakhan’s Rumble: each hero has a totem you have to deal with, and the totem can be from either class that the hero represents, so it can be different each run. Just pay attention to what it does and try to keep it out of play as much as possible — you should be fine. 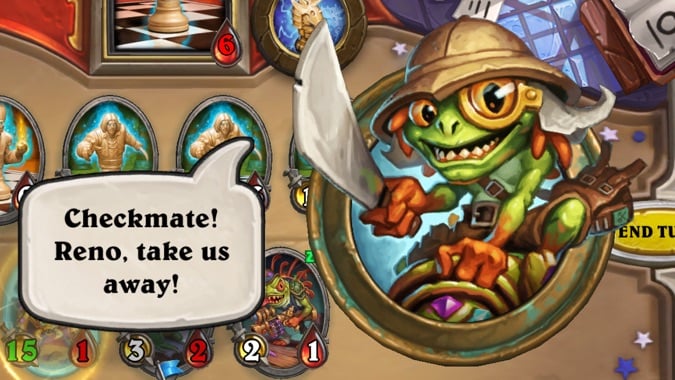 How to win Road to Northrend

Your path to victory is all about picking the hero that best suits you and building a deck around their particular talents.

Hero Power: Arcane Craftiness (2), fires two missiles that deal one damage each. However, after the first match his Hero Power changes to Practice (2), which casts a random portal with random targets. Despite its randomness, the results are usually in your favor, so cast it when you can to get minions on the board or buff the minions you have on the board.

Hero Power: Druidic Teaching (2), Restore 2 health, then draw a card if the target is at full health. This is more defensive than your other hero options, but it synergizes well with both Druid and Priest healing and the card draw can help you keep up momentum.

Hero Power: Spread Shot (2), deals one damage to your target and one damage to the enemy hero. This isn’t that much different from the standard Hunter hero power, but it gives you targeting flexibility — and if you want, you can target your opponent to do a straight two damage.

The exact decks you build for any of them depend on which cards and treasures come up for you, but I find there are few bad options. The most important thing is to pay attention to your opponent’s powers so you can avoid them — the only trouble I ran into during this Brawl was when I rushed head-first into the fight without thinking.

Pick the best cards that are offered to you, pay attention to your opponent, and just play. This is a low-stress Brawl that can be pretty fun, whether you’re winning or losing.

If you win, you get the standard Classic card pack, but this is a fun Brawl for questing, too. I’ll probably be playing it all week.