Chapter 1 and 2 are available now, with chapter 3 going live on February 4 and chapter 4 going live on February 11. You can buy individual chapters for $6.99 (or 700 gold) each, or you can buy the full adventure for $19.99. Each chapter comes with both the League of Explorers and League of E.V.I.L. campaign for that chapter, as well as 8 unique cards — all of which are playable in standard as well.

That’s right, Blizzard is bringing back card rewards: if you buy and play through the adventure you’ll unlock 35 new cards you can use in Standard or Wild play. This is how the game’s earliest adventures worked, but Blizzard moved away from that model with Kobolds & Catacombs. That’s a nice card boost for players who are buying the adventure regardless, but a potential annoyance for everyone else.

Like similar single-player adventures, you’ll fight your way through a series of bosses, but unlike recent dungeon runs, you’ll start each fight with a pre-constructed deck rather than building as you go. (Though if you try to tackle the harder Heroic mode, you’ll be building your own deck for each encounter.) This will take some of the randomness out of the adventure, but deck-building was a fun component of the game, too.

Whether you’re thrilled by this new adventure mode or frustrated that Blizzard is breaking the familiar format, here’s what you need to know about Galakrond’s Awakening — starting with just where we are in the game’s strange story.

The Year of the Dragon story so far

For the first time in Hearthstone, the Year of Dragon featured a meta-narrative spanning all three expansions. In Rise of Shadows, players helped the League of E.V.I.L. fight through the magical city of Dalaran in The Dalaran Heist. Once the villains captured the city, Dr. Boom strapped rockets to it (because of course he did) and whisked it away to deserts of Uldum… after a minor incident where it crashed into Blackrock Mountain.

Elise Starseeker, leader of the League of Explorers, rescued Sir Finley, knocked some sense into Reno, and recruited the dashing Brann Bronzebeard just in time for the League of Explorers to swoop in and save the day in Saviors of Uldum. They battled through the Tombs of Terror to defeat the Plague Lords, but in the end, Rafaam escaped, as all good villains are wont to do.

Then, Rafaam headed to Northrend with the Plague of Undeath. What’s in Northrend (besides the whole portal to the Shadowlands thing)? That’s right: the bones of Galakrond. Rafaam wants to awaken the ancient terror and it’s up to the League of Explorers to stop him in an epic final battle … of puppets?

This year’s adventures have been all about stories, and this one is primed to wrap up the narrative. There are two campaigns: one for the League of E.V.I.L. and one for the League of Explorers. Each campaign plays out over four chapters (buying each chapter unlocks the chapter for both sides), and each chapter pits you as one of the League Heroes or Villains against a series of three bosses. And as we’ve mentioned, for each encounter you’ll be given a pre-made deck to tackle the challenge.

I enjoyed the deck building aspect of the earlier adventures. While I’m willing to reserve judgment until I play it, I’m not a huge fan of the pre-made deck concept, because it might limit the replayablity of the adventure. By making it something to solve rather than something to play, it may be more of a one-and-done puzzle than a game.

But once you complete Galakrond’s Awakening, you’ll open access to a Heroic mode. In the past, the difficulty of the Heroic modes has been punishing requiring a combination of good play and more than just a little luck to succeed. In Heroic mode, you’ll be able to build your own deck — which is exactly how the very first adventures like Curse of Naxxramas and Blackrock Mountain worked. Your standard ladder decks never did well here, and you needed to construct specific decks to defeat the specific challenge each boss offered.

Heroic mode may be where the replayability of this adventure appears. But just like normal mode, it may turn into a puzzle to be solved, and once players find the cards that work, the adventure’s over.

Should you triumph over the Heroic version of Galakrond’s Awakening, you can earn two different card backs: one for the beating the League of E.V.I.L. campaign and one for beating the League of Explorers campaign. In the past, you also received card packs after defeated the first couple of bosses, but this is another place where Galakrond’s Awakening is subverting expectations — instead of packs, you get cards.

This again harkens back to how the first adventures worked. The upside is you know exactly what cards you’re getting for buying the adventure. The downside is these haven’t been craftable in the past until the adventure rotated out of Standard play, so the adventure may be the only way to get them. As you’ll see below, some of the preview cards already look like they will be desirable, which may make this adventure a must-buy for ladder players.

Each chapter will award 8 cards — 4 from each campaign. The first chapter of the League of Explorers campaign also awards three bonus cards, for a total of 35 cards from the adventure.

You can (and should!) check out the complete list of cards, but the adventure’s hero card is already intriguing: 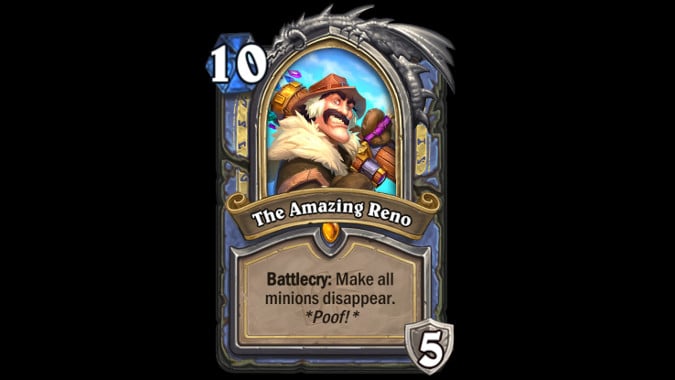 The Amazing Reno: A 10-mana Mage Hero card with a Battlecry of “Make all minions disappear. *Poof*”.

My assumption is this is basically a Plague of Death, and all minions on both sides of the board are removed. Deathrattle and Reborn will not fire, and it’s a clean board. Board clears are desired by slower decks, but with this card you’ve spent all your mana and now your opponent has 10 mana to refill.

This card will come from completing the fourth chapter, so it’s not available yet.

Will you fight for the dastardly League of E.V.I.L or the heroic League of Explorers? The fate of Azeorth is (once again) in your hands, heroes.