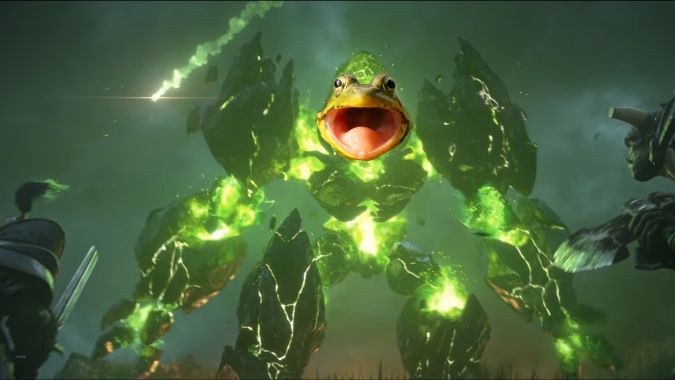 Anyone else find themselves typing “refroged” instead of “reforged”? I don’t really know why it happens, but I have to continually correct myself. That said, it’s funny to picture Warcraft 3 but with frogs in place of the characters.

GLOWING METEOR CARROT TAKES ME BACK TO MY CHILDHOOD AND ALSO MY ADULTHOOD:

There are many rainbow roads. Which one is the worst?

The one I hate the most is actually the remake of the N64 Rainbow Road. Why? Because what I loved about the N64 Rainbow Road is how long it was, and the remake cuts a single lap into three and calls it a day. To me, it completely misses what made the N64 version special (and kind of crazy). There was just something about an extra-long course to close out the game, and there was a unique feeling of being out in space, way ahead of everyone else, with lots of road ahead of you that made it feel special to me.

BEDEFIANT IS HAVING WEAPON TROUBLES:

Q4TQ: Anyone else have trouble getting a good weapon to drop? I mean, there’s only 2 – 2H Weapons in ALL of Ny’alotha, the Waking City… ugh.

This is why I LOVED my Ashbringer. For some classes, like my Retribution class, Weapon damage is like a HUGE percentage of our DPS and if we can’t get a good weapon… we suffer.

…its frustrating and makes me sad :-(

I’ve been using the patch to gear up my Demon Hunter, and yeah, my weapons are seriously hindering me right now, and it’s been hard to get a new weapon. What I will say is, the Conquest reward is a 440 weapon, and that’s a great way to guarantee yourself an upgrade. I know PVP isn’t everyone’s thing, but between War Mode Incursions and weekly Wintergrasp quests to kill NPCs, it’s really not that bad to hit the 500 cap.

Additionally, item levels went up with Season 4, so even if Ny’alotha doesn’t have many two-handers for you, it wouldn’t hurt to try your luck in specific M+ dungeons that have what you need. Best of luck! I know it can be a pain, but at least when you finally get it, it’ll feel nice and be a noticeable upgrade? I hope?

Q4tQ: Now that we have seen the bosses in Ny’alotha, is there any one cool ability you’d want to steal and add to your Shadow Priest whichever class you play? I really like Prophet Skitra’s Illusionary Projection, I could see having fun with that both in PvP or out in the world against random packs of mobs.

I haven’t seen all the bosses yet, to be honest, but every time Blizz adds in mobs with totally awesome Void abilities, it makes me a bit sad that we don’t have some of them. Granted, having a million crazy looking abilities isn’t realistic, nor is adding new ones super often, but still.

Anyhow, I’m not sure what it’s called, but there’s one I’ve seen that shoots giant pillars of Void out from the ground, and it looks really cool. Among like a million other Ny’alotha abilities I’d Ny’alove to have, that one’s stuck out the most. But again, I haven’t seen all of the raid yet, so I’m sure there are more I’ll want.

KALCHEUS, TOTALLY NOT CORRUPT ASKS ABOUT MY BACK:

Q4tQ: What is your current cloak rank and how far have you gotten in the Titanic Research tree?

My cloak is currently Rank 8 (or whichever is the max), and I’m on the fourth tier for the research tree but don’t have it filled yet. That’s having not filled the right half of the second tier, though, since I’m mostly focused on soloing these things. My next talent will cost 1,800 Mementos.

ENO REMINDS ME OF MY UNCHANGING WAYS:

QfMitch: If Forsaken got an allied race ‘reskin’ where you had the option to play a ‘revitalized’ Forsaken generic human type (with red eyes) like Nathanos, a ‘light-bound’ type like Calia, or a skinny but fresher-looking Forsaken human like the thin Kul Tirans, which would you play?

So, here’s the thing with new races or updates like these or whatever. I love them, and I am on board with every one of the things you listed (including a non-Draenei tentacle-faced race). But I would never actually make my main any of those things.

I’ve been playing with the same character for almost a decade and a half now, and I just can’t bear to change him. I know I can always change him back, but I just don’t really want to do that. There was a little while where raiding brought me to the Alliance and I race changed to Night Elf, and it just wasn’t the same. I remember playing the Legion beta as a Forsaken and missing it so, SO much. Obviously, I’ve gone back to Forsaken for good now, but my point is, I won’t change my main’s look because I just don’t like the idea of changing it.

It’s the same reason Allied Races — while super cool — have never really had a big impact on me. “But what about alts?” you ask. Guess what! I don’t play alts that often, and the ones I do are in the same boat as my Priest — toons from back in vanilla. The only exception to that is my Demon Hunter who, well… it’s Night Elf or Blood Elf there.

MAALIN ASKS ABOUT MY FAVORITE PART OF THE PATCH:

2 questions about Horrific Visions: 1 – Can you use the “on use” effect of the cloak while in combat? 2 – If you need 2 pages can you get both of them from the same area or do you have to run them both? Thanks

Yes! This isn’t just for the Visions, either. You can use the cloak out in the world if you’re questing and one of your Corrupt effects gets in the way of things. As for the pages, you can get them from the same area in separate runs. I believe the chests at the end have a chance to drop more than one, but I’m not 100% sure on that. Wowhead has a nice chart on the minimum number of runs needed for each upgrade, though that’s obviously if you’re doing a perfect run (especially toward higher ranks).

GINAC 🐲 BRINGS UP EVERYONE’S FAVORITE SUBJECT OF THE YESTERDAY:

How about adding Dark Ranger just as a spec for Death Knights?

Personally, I don’t think of Dark Rangers as an offshoot of Death Knights so much as I think of them as an offshoot of Hunters. Really, the best way to implement them — if not as a class themselves — would be to provide cosmetic variants of different specs. So, for instance, a Marksmanship Hunter could opt to have all of the exact same abilities, but have a different appearance for each of them.

That said, I would LOVE new specs for classes, but I know it will never happen. Blizz has a hard enough time balancing one new class, never mind adding a new spec for every class in the game. Still, it would be cool.

JALAMENOS DIDN’T MEAN TO HAVE THIS INCLUDED BUT IT IS:

A youtuber I’m watching that usually only posts 3-4 videos a month has been doing daily videos since the start of 2020 (because of an ongoing project).

Today appears to be the first day this year that he’s not posting a video, is it wrong that I’ve already grown accustomed to the daily content and feel like I should demand more? :P

Look, I know you were completely joking here. Your tongue says it all! But I really hate the idea of “demanding” something from a creator, and it seems like it’s a mindset that’s grown more over time. If you’re paying for something and you were promised something for your money, you have every right to ask and figure out why you’re not getting that something. You also have the option to discontinue paying for that something and speaking with your wallet, as it were.

At the end of the day, communication via mature discourse is key. And if you’re NOT paying for something but have come to expect that something, there’s probably a reason you’re not seeing it. Demanding will only make the creator more anxious or burned out or whatever other negative you want to include.

Man, I said “something” a lot, huh? And to be clear one more time, this isn’t directed at you or even the Blizzard Watch community. Your comment just got me off on a tangent about a larger issue.

AND WITH THAT… We’re done for the day. Enjoy your Thursday, and leaves lots of Qs for Liz!