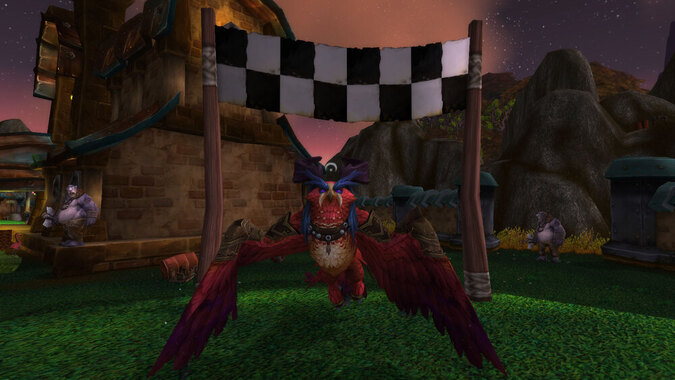 Wasn’t that some great football yesterday? I didn’t really have a horse in the race since I don’t follow the NFL that much, but both teams played really well. If your favorite team won, congratulations! If not, better luck next year!

How great was that halftime show too? Shakira and J Lo put on an amazing performance. I’m still holding out for the Weird Al one though. He put on a pretty great show during the 2016 BlizzCon, and I bet that he could bring the house down at the Superbowl. Who knew that the only thing the Superbowl was missing was accordion polkas? As good as the game and the halftime show was, my favorite part is seeing the food everyone makes for their viewing parties. Some people go all out, and I love it when they make tiny stadiums to hold all the snacks or cheese balls that look like footballs.

I’m getting hungry just thinking about it, so we better get Queuing so I can go eat lunch.

DTAIL WHATCHA WANNA DO FOR DINNER?

This is a bit of a cheat, but I’m going to go with Pasta. Macaroni and Cheese, Lasagna, any kind of red sauce or bolognese, Lasagna again. I could eat it for every meal of the day. Of course that many carbs aren’t good for you unless you’re The Rock or training for the Olympics, so I restrain myself. The options are limitless! Make it with a different shape of pasta, a different sauce, add more to your sauce, or go for something with only a couple of ingredients. If you can make one sauce really well, you’ll always have a meal that impresses.

ENO ISN’T STARVIN’ BUT HE COULD EAT

QftQ: Do you wish we had a third N’zoth assault? And if so, in what zone? Storm Peaks? Badlands?

Yeah! Storm Peaks is a great option. You’ve got Ulduar to protect and that giant Titan engine in the middle of the zone. There’s a faction or two that we could be working alongside to help with, and it’d make for a good reason to say hello to Mimiron again. They could’ve added a third reputation with some more rewards like a Corrupted Proto-Drake mount. It would make for a more global threat from N’zoth. Since right now he’s only on two out of the four major continents. Of course, having three sets of dailies up each day would be a lot of work, so maybe they’d have to figure out a rotation where only two of the three zones are actively being assaulted at once. Or at the very least add a portal back to Ulduar and the Vale of Eternal Blossoms for easier travel time.

Barring Storm Peaks I would’ve like to have seen an assault in Un’goro. It checks the Titan Facility box, and it has dinosaurs! We could’ve seen Old God infested dinosaurs!

ANDREIOS IS GOIN’ TO THE DRIVE-THRU!

Q4tQ: So here’s a scenario for your consideration. Limit remains ahead of Method in the WF race, and it got me thinking about this.

Limit has a 12 hour head start on Method. Let’s say Limit does keep it up and gets N’Zoth down first. But then let’s also say that Method kills him, say, 9 hours later (i.e., within the window of Limit’s head start, so in three hours’ less elapsed time.)

Who’s “World First?” Limit, who was the first to get it done? Or Method, who did it in less time?

Historically it’s been the first team to get the kill, no matter when the raid opened for you. That 12-hour headstart that North American servers get hasn’t been the biggest help during Battle for Azeroth. When you’re the first team to a fight you run the risk of finding some of the bugs that weren’t caught in testing.

The most recent example of this is Limit causing every instance of N’zoth on NA servers to be despawned when they accidentally broke the secret Mythic phase. Dealing with these, or waiting for hotfixes to come through can hold you back and give other guilds the chance to catch up. During the current race, Limit has been at the cutting edge the whole way, but now Method has caught up to them at N’zoth and it remains to be seen who is going to defeat the Old God first. For every major raid in Battle so far Limit has reached the last boss first, but Method has gotten the first kill.

Changing the raid to open at the same time globally would help to solve a lot of the current problems of one guild racing out the door first and the others benefitting from the hotfixes and strategies that they’ve been using. But it would mean that half the raiders would be raiding in the middle of the night. Forcing a change to your sleep schedule isn’t the best way to get peak performance.

DISHSOAP WOULD LIKE TWO HAMBURGERS WITH ONIONS AND CHEESE

My first question in the queue! Do I get anything? Membership pin? the first stamp on my club card?

You get 10 Blizzard Watch Bux™!

Sadly they’re only redeemable on February 30th for a small ice cream cone.

RED CHANGED THEIR MIND! THEY THINK THEY’RE GONNA HAVE A CHICKEN SANDWICH INSTEAD THIS TIME

The flight whistle should work in Uldum and the Vale

This wasn’t really a question but yes, I agree. It’s time they added an heirloom flight whistle that would work in any zone. Maybe if we all make puppy dog eyes at Blizzard they’ll add it alongside the leveling revamp coming in Shadowlands.

LUOTIANX OH NO THEY FORGOT THE ONIONS!

Q4tQ: Is it just me, or does the corruption system feel bad? Titan/Warforging always felt like a bit of a ‘Yay, a little bit of good luck’. A spot of extra sunshine, if you will. Corruption feels more like ‘oh goodie, more work for me to do and another thing for me to deal with’.

I was never really that excited that I got a piece of Warforged or Titanforged gear, but I was disappointed when a piece of gear that I really wanted didn’t get extra levels on it. Now the problem is when I get a piece of corruption but it doesn’t have one of the best effects on it. They are not all created equal and the difference between the top tier effects and the bottom ones is staggering.

I’ve seen people trying to sell a ring in trade chat for four million gold because it has a maximum value Infinite Stars. Whether or not they get the four million they’re asking for, they’ll probably still end up making a bunch of gold off of it because Infinite Stars does a ton of damage. When I tank a dungeon now my #1 source of damage is Echoing Void — by a large margin. And thanks to my legendary cloaks Corruption Resistance I only suffer the barest of movement speed debuffs occasionally.

I can see how it would be worse on fresher characters though. You don’t have the mementos necessary to cleanse it, and the gear level to survive for very long with a Thing from the Deep chasing you. If they’d kept Titanforging as an option up until 445 and you only started getting Corrupted gear after that it might’ve worked out better.

Make sure that you leave her lots of questions to answer while she’s trapped in the drive-thru!