The Queue: Take these broken wings and learn to fly 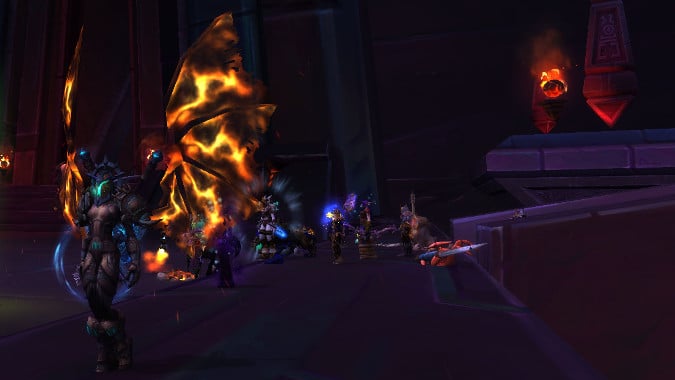 Well, they’re pretty, at least. And they put me in mind of a song.

This is the Queue. I’m not sure what a ‘Love Rocket’ is, but you guys REALLY want one.

MYTHRIAK GIVES ME AN EXCUSE

What’s all about with people and musical theaters?!?!?

I was a theatre minor in college, watched a whole lot of musical theatre. I’m a huge Sondheim fan — Assassins, Into The Woods, A Little Night Music, Sweeny Todd — I absolutely love all of it. There’s something beautiful about the way musicals tie story and song together.

I can’t speak for anyone else, but some musicals, like Wicked or Hamilton seem to transcend the genre and really reach people. And even stuff like Cats can have surprisingly effective moments that do what regular prose simply can’t.

JALAMENOS ASKS A QUESTION ABOUT COMPLETION

Q4tQ: Now that the mythic race is over, do you consider BfA to be “done”?

Battle for Azeroth is ‘done’ in the sense that this is its final patch and there will likely not be any further content for it. Anything that comes after this will likely be Shadowlands content, like the pre-expansion patch.

But for me, an expansion is done when I’m done with it, and I am certainly far from done with patch 8.3.

RED THE RED IS NOT A FAN OF OCCAM’S RAZOR

Q4TQ: how do you think we’ll get to the Shadowlands? Will Sylvanas (or someone else) kill us all? Will we voluntarily “die”? Or will we just go to ICC and pass through a portal (booooooring)?

First, we’re going to have to go back to the Maw of Souls and steal the Naglfar, which we will then ride through the portal. It will of course crash on the shores of the Maw, but we’ll have accomplished our goal and reached the Shadowlands, and the wrecked hulk of the ship will be our starting base as we explore the other zones.

QftQ: If instead of pretending to be Horde for the Mekkatorque and Jaina fights the Alliance had their own Horde bosses, who would have made the most sense for the Dazar’alor raid?

Honestly I’m a little surprised Talanji wasn’t a boss in that raid. We killed her dad. Having her lay down some serious rage on an Alliance force who are desperately trying to escape would have been an interesting way to get her more involved and let both factions get a look at her.

I don’t think Nathanos works — quite frankly I don’t want him as a raid boss unless I get to put him back in the ground permanently. But I’d be interested in seeing something involving the Zandalar, it’s their city we’re attacking. Maybe a single Zandalari dreadnaught escaped the explosives and shows up and it’s full of dinosaurs because really, I’ve been very good and I deserve a present. Alliance have to weather swarms of dinos in order to escape.

Q4tQ: If you could have any character from WoW be your Valentine who would you choose. I’m going with Mylune, for reasons of course.

Tomorrow is a Rossi queue right?

By the time I’m answering this, it’s today, but yes.

So with the announcement of the new Warcraft book there has been a lot of anger from certain segments of the player base. In among the irrational hate aimed at specific authors for plot points they had no control over there is one complaint that I view as legitimate. Some very key plot elements such as Calia’s death and resurrection were not adequately conveyed in game for those players who didn’t pay attention to the novel. This contrasts with the way the Warbringer shorts were all brought into the game at appropriate points. How do you think Blizzard should go about making sure those who don’t seek out the supplemental media are aware of the pivotal events in prelude novels?

Honestly, I’d steal an idea we were talking about on Lore Watch the other day — go back to the original World of Warcraft starting zone approach and make recap videos. Something as easy as a semi-animated Warbringers style, with a voice over that explains the basics. “You may know Calia Menethil as the last heir of the house of Menethil, daughter of Terenas, sister of Arthas… but what you may not know is how she lost her life at the hands of the Banshee Queen.” Do a brief breakdown of the salient plot points.

Or just have an NPC named Old Man Rossi <Rosin-Soaked> who will show up randomly and explain lore to people. And complain about taking eight years to farm up his shoulders.

Blizzard Watch is made possible by people like you.
Please consider supporting our Patreon!
Filed Under: I Like Them, Mister Mister, Yes
Advertisement