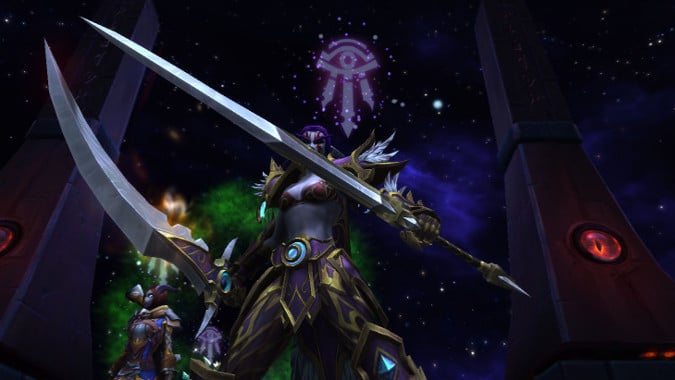 So my guild killed Heroic Wrathion and Prophet last night, which many of you won’t care about at all. But for me, the blind dude who has a hard time not dying on most fights it was a pretty big deal.

And no, I don’t wear a shirt on this transmog. I’m going for a particular look similar to the original Night Elf in the original WoW cinematic. It is extremely had to pull off in plate.

SPENCER MORGAN ASKS ME A QUESTION ABOUT SETTLING SCORES

Qt4Rossi: what is your idea of night elves settling the score? What would be enough for you to walk away from the ashes of Teldrassil, and feel no need to raise the issue again in the future?

I hesitate to answer this because inevitably we’ll get the “Rossi hates the Horde” thing again, but that feels cowardly. I don’t hate the Horde. But I don’t see a way to just move past what happened that feels emotionally real, that actually serves the verisimilitude of the plot.

Based on my life experience, an event as traumatic as Teldrassil will never be forgotten and there is no way it would make logical sense for any figure in anything like a leadership position among Night Elf society to ever really let it go. An uncounted amount of people died horribly. The devastation isn’t limited to Teldrassil, either — people throughout Darkshore and Ashenvale also suffered, lost their homes at the least, and many of them died as the Horde offensive marched through.

It would not be a believable storyline to have the Night Elves just get over this. The Horde did this. The dead hero Varok Saurfang planned and executed the attack and went so far as to attack Malfurion from behind, in a move he himself admitted was dishonorable, to make sure the assault succeeded. There were thousands of Horde soldiers from pretty much every Horde faction assaulting those settlements and burning those forests.

It’s just not credible, it lacks any sort of verisimilitude if the Night Elves leave Battle for Azeroth and just kind of forget this happened. People still bring up Gilneas and Theramore, how could anyone expect Teldrassil to be ‘meh, over it’ to the Night Elves?

I really hope there’s some movement in Shadowlands that could lead to an actual end to this. I don’t need or want the Night Elves to burn down Thunder Bluff or otherwise destroy something of the Horde’s. That’s not what I want. I just want the story to end in a way that feels both earned and appropriate to what happened.

Q4tQ: Do you think the dude at McDonald’s noticed I ordered the exact same thing for Breakfast and Lunch today?

Nope. The dude at McDonalds has a lot going on and doesn’t really pay attention to what you eat.

Q4tQ: How much more of the Blighted Lands do you think we will see in Shadowlands? Is Thros just a small area that is part of a larger zone, something we may visit briefly in a phased quest, or a likely candidate for a future patch zone?

Honestly, I have no idea. Thros is considered a realm of the dead, even with its origins as connected to the Emerald Nightmare (which isn’t really a thing anymore) but how much of it will pop up in Shadowlands is completely up in the air at this point. If I had to guess (and I do) I’d say that Thros is a remnant of the Emerald Nightmare that connects to Ardenweald in an aberrant way, a means to escape the normal cycle where a spirit dies and is sent there for its Anima to be returned to the cycle of life and death. By using Thros, Gorak Tul essentially created a soul trap, a means to bind his people after their deaths and escape the natural cycle of life and death represented by Ardenweald.

Whether or not we’ll see it right away, or later, I really couldn’t say. I’m willing to speculate that we won’t, at least not as a full zone. We may end up going there, but if we do it’ll be for a few quests at the most.

BORTAINE WANTS TO KNOW HOW WOW WILL END

Q4Rossi: The expansion after Shadowlands is the final season of WoW. How would you end the game? I guess that means you also get to decide how Shadowlands ends.

Diablo and the Seven Evils invade.

KALCHEUS BRONZEBEARD IS BACK WITH ANOTHER QUESTION

Q4tQ: Since I’m rolling 4 new toons for Shadowlands, I’m envisioning them as a party even though they’ll each be doing separate covenant questlines. I’ve run into a little bit of a narrative tangle, though, as I’m not sure how to convincingly have a Kul Tiran Guardian Druid joining with a Zandalari Paladin, a Vulpera Shaman, and a Nightborne Priest. I guess I could just throw them together and not worry about it, but I don’t want to create the Azeroth version of The View.

They all just don’t give a pirate ghost anymore. The war is stupid, it doesn’t affect their lives, they don’t want to deal with it. Seriously, there was a cease fire negotiated, maybe these guys really want to give peace a chance. Just make sure the druid isn’t from Brennadam, because seeing your neighbors impaled on pitchforks is a bit of a downer.

ENO ASKS ABOUT MY FAVORITE GAME OF THE PAST FEW YEARS

QftRossimester: If you could take anything from AC Odyssey and add it to WoW what would it be?

Get Michael Antonakos and Melisanthi Mahut to do some voice acting.

Steal abilities like Hero Strike and Ring of Chaos, both of which I love.

Give us a ship. Heck, we should have had a ship in Battle for Azeroth and the fact that we didn’t is just such a missed opportunity. Especially if they went with the naval combat where you mess up an enemy ship, then jump over there and massacre the enemy crew. I freaking love that.

Honestly, most of what I love about ACO wouldn’t work in WoW. But that stuff above you could, and should, do.

Q4TQ: do you have anything against watching movies with subtitles?

Aside from going blind, no. I think they serve a useful purpose and no one should be afraid of them. If you don’t want to use them? Don’t. But it’s not bad if other people do want to use them, for whatever reason.

Q4tQ: What celestial do you use in the Vale assaults? (Poll alert for Red!)

I notice a lot of people using Chi-ji, but when I use him, I don’t notice a significant amount of healing being done to myself. I use Nuizao on my mage instead.

Okay, that’s the Queue for this Wednesday. I’ll see y’all in March.

Blizzard Watch is made possible by people like you.
Please consider supporting our Patreon!
Filed Under: Fox Was Right
Advertisement