The Queue: Camping out 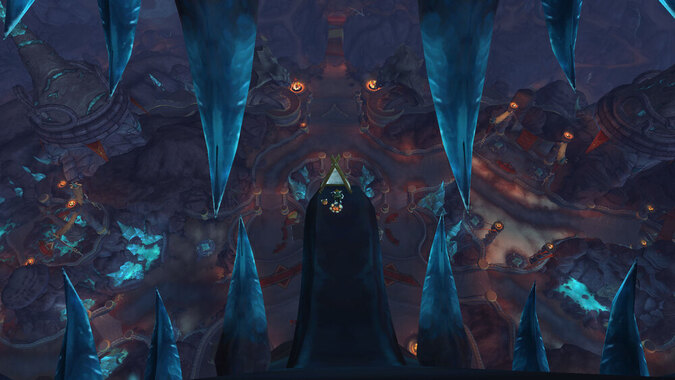 I’ve been trying to find the most absurd places to set up my Vulpera’s camp. Clearly this is the endgame for Battle for Azeroth. I’m calling it now — competitive camping will be the next major stream set up by Method. I’ve also heard that it’s Cypher’s birthday! Happy Birthday! I hope that your day is full of good times.

But for the rest of you, it’s just your average day in — The Queue.

LUMBERJACK RC IS JUST A SMALL-TOWN GIRL, LIVIN’ IN A LONELY WORLD

Q4tQ: When will I remember my Vulpera can camp out?

q4tq: When will I remember any of my Vulpera racials?

Hopefully soon! I love seeing the Vulpera camps laying around in the world, that’s honestly my favorite thing about them as a whole. Unless I’m playing one, then it’s the front flip they do when jumping.

As for the rest of their racials, I have the hardest time remembering to use any of the new races’ abilities. I even forget to use them when it could save my life. Just the other day I failed a chance at Servant of N’zoth because I was hit in mid-air with a net gun, and I panicked and hit about 17 different buttons to try and avoid pancaking on the ground. Unfortunately, none of those buttons was Pterrordax Swoop which would’ve kept me off the ground long enough to get back into Flight Form and escape. Maybe it’s because none of them is a direct combat button like the Darkspear Troll’s Berserking. Or maybe I just need to make a macro that has the abilities in it.

Q4Queue – Has Blizzard creating one expansion systems in WoW restricted their ability to refine and improve those systems from expansion to expansion, or do would they just end up like the mission table, there, but not as engaging as it was originally was.?

That’s the catch-22. Because absolutely the mission table is a shallow version of what we saw in Legion and Warlords of Draenor, but if they just gave us the exact same content from one expansion to the next we’d get bored of that pretty quick. Which I think was one of the biggest drawbacks of Battle for Azeroth. Once you hit 120 you were right back to running World Quests to earn Azerite Power (instead of Artifact Power) and War Resources (instead of Order Resources which you earned instead of Garrison Resources).

World Quests are a good system! They’re great for sending you out into the world and provide things to do that aren’t as involved as running a dungeon or battleground. You’d never feel bad for abandoning a WQ if the doorbell rang, or your cat threw up and you need to go clean it up. But after two expansions of them, we need more refinement as we head into Shadowlands.

We can see that they’ve already been tinkering on the questing system with the different structures of Mechagon daily quests and the N’zoth assaults. I just hope that they can land on a better system than going entirely back to picking up scattered daily quests. Covenants feel like a good compromise between having 12 different Class Halls and the single path of the War Campaign. Torghast is the culmination of what they’ve learned from Horrific Visions, the Mage Tower, and the many deaths of Chromie.

But please let’s stop with the mission table. It’s had a good run.

MISTAH JAY IS JUST A CITY BOY, BORN AND RAISED IN SOUTH DETROIT

Q4tQ: When NPCs in 8.3 speak Shath’Yar to those without the Gift of N’Zoth, does it still translate in whispers?

No. N’zoth’s secrets are only for those who’ve kept his Gift.

I had a friend use their N’lyeth, Sliver of N’zoth and their Twitching Eyeball. Neither of them allowed them to understand the corrupted Hozen in the Vale. Being able to understand Shath’Yar is the only benefit to keeping the Gift of N’zoth that I’ve seen. I was hoping for a little more of a nod to players who had kept it. It didn’t have to be a whole new in-engine cinematic like the Sylvanas Loyalists got, but maybe a unique whisper or two during the N’zoth fight or a buff item that only you can see during the N’zoth assaults.

Q4Cory: How do you handle Rexxar with masks? Do you zerg him or slowly DPS and wait for his dogs to appear, then burn them down?

Well, you’re ranged so it’s already easier for you to avoid his traps. But you can play it one of two ways. Burn him down as fast as humanly possible, so that even if he does get a bunch of those corrupt pigs out, they won’t have a chance to use too many quills on you. Or take him down slowly, and make sure to kill each new hog as it shows up.

You should definitely make sure to kill the first one, with any luck you’ll activate Gift of the Titans and won’t even have to worry about the potential sanity losses. Void Quills are the biggest drawback to running Rexxar solo. In a group, you have more people to help spread out the sanity hits, and take care of stuns and interrupts. Personally I’ve always made sure to swap to the pigs as soon as they’re out. Especially now as I start to use the Mask of the Daredevil more often.

TIGER HAWKE IS A SINGER IN A SMOKEY ROOM

QftQ about the 8.3 legendary cloak that you’ve all been working on. I haven’t even started on it yet. Is this cloak something that is also going to be needed for Shadowlands or is it just for the current BfA content?

The cloak is only going to be for current content. You’d probably be able to wear a fully leveled almost all the way through leveling in Shadowlands, so if you didn’t want to worry about finding cloak upgrades when you get into the next expansion it could be worth getting. If you were interested in getting the cloak it’ll probably take a couple of hours. Depending on how quickly you can get around the world, and if you’ve already unlocked Azerite Essences for your Heart of Azeroth.

There is a nice step by step guide. Seeing everything laid out makes it seem like a much less daunting task. Look there are only 15 things you need to do!

Q4tQ: I’m playing the final mission of reign of chaos (reforged). Am I not meant to already have mountain Giants and Chimera as trainable units?

Well, the Mountain Giants were only added in The Frozen Throne expansion pack, so no you don’t get them to beat up Archimonde.

As for the Chimaera, you’d think that for the last mission in the game you would have access to the Night Elves’ most powerful flying unit. I think they stopped you from being able to train them because of just how strong they are at doing siege damage. If you can easily destroy the Undead base that Archimonde builds at each stage — the mission gets way too easy. They wouldn’t help with your Frost Wyrm problem though, Chimaera are the only major aerial unit that isn’t able to attack other air units.

Remember the song when you’re doing things this week. You got this!