The Queue: IT’S BEEN!… one week since I Queued at you 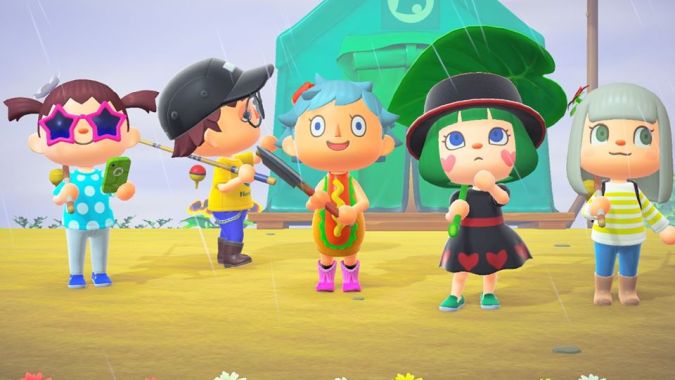 You may recall me being pretty excited about Animal Crossing: New Horizons last week. That hasn’t changed. I love the game. I want to spend every second playing it. I can’t believe I’m even here writing this right now when I could be in my town, saying hi to Isabelle or organizing my fruit orchard.

But instead of Queue and A(nimal Crossing), let’s have some Q&A, shall we?

Q4Mitch: how can you convince someone who has never tried Animal Crossing to buy it? Can you sell it to us?

By now, I imagine someone who’s keen enough to ask about playing it has already seen the memes and the images and all the general content about the game circulating. They know the game looks cute, which is one of the first things I make clear when people ask. But what’s harder to show off or really pinpoint is how happy the game can make you feel playing it. It’s wholesome without wholesomeness being its objective. Especially right now when the world feels like it’s falling apart, the game is a fantastic getaway that’ll make you feel happy to be a part of.

And if that’s not enough, the game is also massive. There’s a ton to do, and you’re always going to find something new that makes you go, “Whoa, I can’t believe they thought of that.” If you’ve ever liked any sort of collection “minigame” in other games, Animal Crossing has that aplenty. Clothing styles, bugs, fish, furniture — there’s so much to collect in the game.

What’s more, New Horizons lets you customize more than ever. And I don’t just mean changing how items look. You’re able to organize an entire island and make it your own. Yesterday, I spent a good amount of time coming up with a location to place all my fruit and the right amount of space to put each tree from one another. In the end, I got the same feeling I get when I organize a closet that’s gotten over-crowded in real life. It gives you control, and it feels nice to be able to look back and show off what you’ve done.

Lastly, if you’ve ever played Harvest Moon or Stardew Valley or Minecraft or even The Sims and had an even halfway good time, you’ll love Animal Crossing,

NEIL JUNG 🎸 GETS US BACK ON TRACK:

Every once in a while, someone will use a smiley in their post. Is there a trick to that I can learn?

So, here’s a fun shortcut you may not be aware of. On PC, just hit the windows key and period and it’ll bring up the emoji selection tool. Alternatively, typing comments from your phone will probably work, too.

Q4tQ: Do you have a headcanon for why your demon hunter has skimpier clothing than your other leather wearers? Metamorphosis tears it? Sparks from your eye beam sets it on fire?

My Demon Hunter is an attractive badass, she knows it, and she’s not afraid to show that off. That’s her reason.

MISTAH JAY DIDN’T HAVE A QUESTION BUT IT’S A GOOD PSA:

TIL Thunderfury is available for transmog

It is! In fact, all legendaries are available to mog now. The exception is that the Warglaives of Azzinoth still require killing Illidan in Time Walking after having earned them the normal way. The ability to transmog them is limited to DHs, however.

I’M JUST GONNA PUT THIS ONE FROM SPENCER MORGAN IN THE MIDDLE SO MAYBE PEOPLE DON’T SEE IT:

Q4tMitch: What is your advice for someone who takes their Mitch based religion seriously; who finds them-self dating someone that wants them to convert to some lame “real” religion?

What do you think of the Molten Cores/Floor is Lava in Overwatch? Have you tried doing the mission with that affix yet?

I have, and I think it’s fun. Frankly, it’s gotten me really excited for Overwatch 2. The Affixes they put in right now feel like a small taste of what we could really get, and I can’t wait to see how innovative they get with Overwatch 2’s missions.

That said, I would love it if half my team didn’t randomly decide to leave at the very end, completely screwing me over in the process.

What is mitch’s favorite player goof? Like when druids found out they could stack on each other in stag form. Not restricted to Warcraft.

Well, I always loved wall-walking in vanilla WoW. I probably spent more time wall-walking than anything else. So I was really sad when they removed it. There were a few workarounds here and there, but nothing as easy or substantial as wall-walking.

Until Wrath of the Lich King.

For whatever reason, there was a patch or so during Wrath where, if somoene caught an “edge” of a surface and then a Priest cast Levitate on them, they’d just walk completely straight up the surface. Didn’t matter what it was. Picture yourself at sea level below Winterspring. If you used this trick, you could theoretically have walked all the way up the mountain, no problem whatsoever and gotten into the zone itself.

It was an AMAZING glitch, and it reignited the explorer in me my friends. A quick search of YouTube resulted in this, which is a pretty dang good look at the glitch. And like I said, that worked on pretty much any surface. Jovan even said he used it to scale the building in Hellfire Ramparts and explore the instanced version of Hellfire Peninsula.

If spriest was removed from the game, what would you roll (assuming anything at all)?

I know you don’t play alts, but does the double XP month make you rethink that?

Demon Hunter, 100%. I actually think about this every time I play mine because I find the class so fun. If Demon Hunters had been out when I first started playing, there’s a solid chance I would have played them instead. They just feel good to play. Plus, their double jump and whole kit in general is great for exploration… if you’re into that like Jovan is.

As for the boost, it might have if I weren’t busy playing Animal Crossing.

CORY (OUR MONDAY QUEUESTER) ASKS A LOT OF THINGS:

If you could choose one WoW character to eat a meal with, who would you choose?

If you had to eat only one dessert for the rest of your life what would you choose?

What’s something that you want to learn how to cook?

Schoolkids’ Song and Dance from Zingerman’s in Ann Arbor.

Malfurion, so I could poison him.

That’s it, y’all! Go enjoy your Thursday and stay safe out there.

Blizzard Watch is made possible by people like you.
Please consider supporting our Patreon!
Filed Under: Animal Crossing
Advertisement