Prehistoric creatures that should be in World of Warcraft 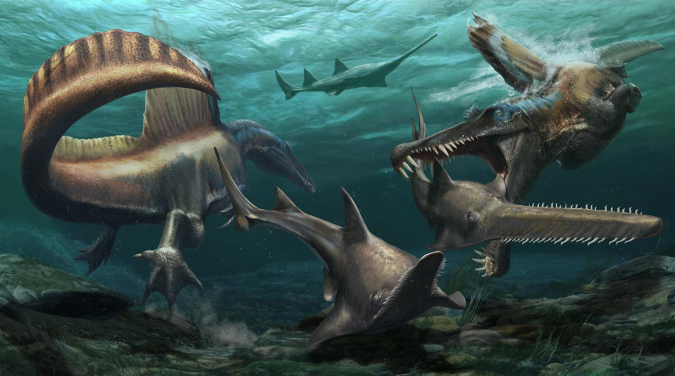 World of Warcraft already has itself quite a few dinosaurs, but a recent news story about a new Spinosaurus tail fossil and what it means for the lifestyle of the dinosaur in question got me thinking.

It’s not that this is an entirely new way of looking at Spinosaurus. Back in 2014, we’d put together clues that Spinosaurus might have been at least semi-aquatic. But this new tail fossil definitely seems to indicate that the dinosaur had a huge, powerful tail with a broad, paddle like structure that would have been very useful for swimming. But as cool as this is, and as much as I could write an entire article just about Spinosaurus — and maybe I even will, because it’s a fascinating species with a convoluted story of discovery and nearly being lost to us — this post isn’t that.

No, this post is because I immediately started wondering why we’ve never had a Spinosaurus in game. We’ve got a lot of dinos — we’ve got Ankylodon, Brutosaur, Devilsaur, Raptors, Threshadons, Saurids, Direhorns, and even made up, no analogous dinos like Sabertusks (although I maintain that Sabertusks are very similar to synapsids like Anteosaurus) but gigantic aquatic shark and crocodile eating dinosaur predators with giant sails have not made an appearance in game. And that has me thinking about what dinosaurs and other prehistoric animals we could/should get.

Give us more pre-history, Blizzard

Also, there’s a ton of prehistoric mammals we’ve seen in WoW, and that’s great, but no Megatherium? If any animal deserves the World of Warcraft treatment, it’s the giant ground sloth, an enormous relative of our modern day tree sloths that could kill short faced bears and Smilodon with one swipe of its enormous paw. I said enormous twice because it really was just huge. And speaking of big mammals, there’s Paraceratherium, a truly gigantic hornless member of the rhinoceros family and frankly we do not get enough Paraceratherium in video games. As much as I love saber-toothed cats and giant mammoths, they get in everything, and there’s a whole host of prehistoric creatures I’d love to see diversify things.

WoW has a good selection of dinosaurs, but it’s lacking on some I’d love to see. There’s no Iguanodon, nothing like an Allosaurus, and even dinos we have like the Stegodon are not what I’d call accurate, or even close. To be fair, neither are the Devilsaurs or Direhorns, because WoW definitely likes to put spikes on things (although it’s possible that real life members of the Ceratopsidae had stiff quills almost like porcupines today) and that’s fine. Dinosaurs and prehistoric animals do not have to be perfectly represented in a game like World of Warcraft, which is very deliberately stylized. I mean, it does annoy me that raptors don’t have feathers in WoW, even with falcosaurs introduced to be closer to the feathered raptors but we don’t have Therizinosauria and I regret that deeply, they’re so cool and weird. Big claws! Lots of feathers! Tiny plant eating heads!

So, now that I’ve spent a lot of time going on about this, I’ll leave the question with y’all. What prehistoric animals would you like to see in World of Warcraft? Good old Inostrancevia? Yes, please. How about new models for ones’s we’ve got now, like their frankly terrible model for diemetradons in WoW. Go look at a real Dimetrodon and try again, guys, they were related to synapsids.

Blizzard Watch is made possible by people like you.
Please consider supporting our Patreon!
Filed Under: Dinosaurs, Prehistoric Mammals, Why Doesn’t WoW Get Weird With Its Critters?
Advertisement