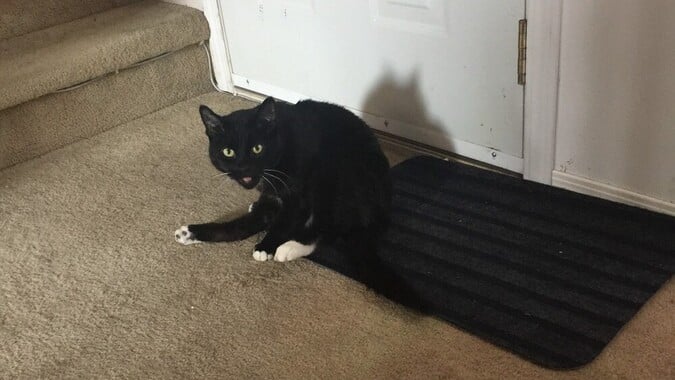 This is Bacardi, and he’s an ornery lil fella, and he has torn up more than one couch in his lifetime — but he’s my ornery lil jerk.

It’s been fifteen years since I finished grad school; almost twenty-five years since I got my undergrad degree. Why the hell am I still having “oh no I’m not signed up for classes!” dreams?!?

Good morning to you too!

A while back I had a really stressful dream about not having finished the Queue on time. It was already late, and the later it got the madder Mitch got at me. I didn’t wake up until well after the Queue was many hours late, and Mitch was unbelievably disappointed in me. Which didn’t make for the best way to wake up. I’ve never felt stressed about writing before. There’s a first time for everything I guess.

But when I was checking my phone later, I realize that I had played a podcast from my most recent feed while falling asleep and I hadn’t set the sleep timer so it would turn itself off after the episode ended. So when that first episode finished, it just went on to the rest of my unplayed episodes — including our most recent session of D&D. A lot of pieces fell into place and I’m a lot less confused about where that dream came from. Turns out I accidentally incepted myself!

Did you accidentally incept yourself too? Or it could just be that school etched itself so deeply into your bones, that your body just remembers when it’s time to get your classes for fall. Either way — at least it wasn’t the taking a test for a class you’ve never taken before, and then when you get up to leave you’re naked dream

Q4tQ: why can’t my Tauren tank wear a goblin hunter on his back in one of those baby carriers to discourage rogues?

Oh, man, do I love fighting Rogues as a tank. They have to be right next to you — that’s where the danger is! Not like those smelly Mages who stay just out of range.

I think that Taurens definitely have the upper body strength and surface area to support at least one Goblin or Vulpera. There was a fight in the Brawlers Guild where the Tauren had two on his back! Why can’t we! Kul Tiran’s are probably large enough too to put a Gnome or a Dwarf on their back without too many issues.

Furthermore, why can’t one ride my bear into battle? I’d love to sneak an extra person into raids on my back. That’d make fights so much easier!

Surely you mean that it’s time for Mecha-Gnombliteration. With all that dangerous technology lying around, it wouldn’t be hard to imagine some enterprising members of the Horde getting their hands on a new weapon of mass obliteration.

Or if both factions wanted their chance, it could be some holdout forces of King Mechagon that need some annihilation. That way both sides could have the joy of running over Gnomes with giant plasma balls of destruction.

Xerianne: Do you think we’re done with allied races in Shadowlands?

Captain Roxxii: If the Covenants become Allied Races, which would get druids?

These work so well together that I’m taking the opportunity to try and sneak another question into the Queue!

I do think that we’re going to get more. Maybe in 9.1 or 9.2, they’ll announce the plans for them. So far three out of four of the Covenants would make for great Allied races. Plus if we believe the dataminers they’re maybe built in such a way that would let them be controlled by players. The Vampires of Revendreth, Fauns of Ardenweald, and Kyrians of Bastion are all prime candidates. The Necrolords from Maldraxxus feel like more of a stretch, but that’s because I haven’t seen as much from them. Maybe when we get their zone on the Alpha it’ll be more obvious.

For Pidi — I mean Roxxii — the Venthyr and the Night Fae are who would get Druids. Night Fae is pretty much Druid central, the cycle of life and death is on full display there, and one of their Covenant powers lets you turn into a Travel form! Complete with different appearances as you explore the zone.

I know that the Venthyr don’t scream Druidic at first blush. But Vampire lore is chock full of Vampires turning into other animals. Which is right up the Druidic alley. If they did make Venthyr an Allied race, and they could be Druids — I would have a dilemma. Which would win, my love of Vampires or my love of Druids?

THE RETURN OF THE RJAGODA

Do you think they will nerf SW HVs at any point? Or, for that matter, will they reduce the cost of entry? I’m against the first, for the second.

I think more nerfs to Stormwind’s Horrific Vision are possible. I know that I’ve seen them mention somewhere that they’ve been looking into the difficulty of Stormwind compared to Orgrimmar. But I can’t remember if that was before or after they changed Magister Umberic to only teleport twice. My biggest ask is that Alleria moves to melee more often, she’s so much worse for melee than ranged. I know she will eventually, but only after she’s worked through all of her casts — and when you’ve cleared all the districts, that’s a lot of casts.

It’s hard to not see why, since Orgrimmar can be pretty much pulled in two straight lines, but Stormwind gets all twisty and turn-y. Plus the hard zone objectives are more involved in Stormwind. The Stormwind vision feels like it got more work than Orgrimmar’s. There are more hidden secrets, and easter eggs on the fringes, and all four of the zones have more complex mechanics. Maybe that’s just because Stormwind has more nooks that they could hide things in, but they didn’t even do anything with the Cleft of Shadows in Orgrimmar. That’s prime spooky N’zoth territory! Throw a miniboss like the Gnome with the robots who patrols around the Trade District down there. Or tie it in with the objectives from the Drag, and you have to go down and rescue more civilians before the last boss shows up.

If they were going to make any more changes to the Coalescing visions it would probably only be increasing the amount you got from the dailies in the Assault zones — but that feels more unlikely. It’s rough when you’re still leveling up your cloak, but when that’s done there’ll come a point where you have way more Coalescing than you feel like you need.

May the 4th be with you!