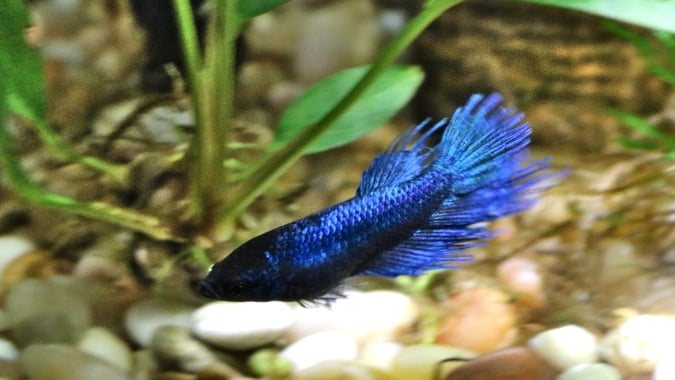 It is Cinco de Mayo and Taco Tuesday, but really I’ll take the flimsiest of excuses to eat some tacos. Or anything, really. Give me a food-related demi-holiday and stand back.

This is The Queue, where you ask us questions and we give the answers.

We don’t have a lot of options for pets, because my husband is allergic to everything with fur, and most of the food you have to give to reptiles gives me the jeebies. So, my daughter chose Princess Candy Cane instead of a hermit crab. Princess Candy is a betta crowntail female, which gives her fins a kind of tattered look. This particular variety of female is also known for being thicc because of how they carry their eggs. We were going to get her a couple shrimp buddies but neocardinia are bizarrely tough to source — as soon as any local pet shops get some in, people buy literally hundreds for fish food — and Princess Candy is a little skittish anyway. She has a five gallon planted tank, with an anubias nana, some stray java moss, and a few windelov java ferns behind her in the pic above. Her substrate is Seachem Flourite overlaid with pebble gravel.

My daughter is sad she can’t really snuggle Princess Candy, but thinks it’s relaxing to watch her swim. True to kid form, she has to be reminded to feed Princess Candy, and she isn’t a fan of all the other maintenance. We change out about a quarter of the water every week on Tuesday (she does think all the chemistry stuff is cool), and before that we have to treat the water with anti-chlorine stuff, and we usually add a few drops of fertilizer for the plants. Also, bloodworms are pretty gross so I guess I kinda lost out on the ‘food I don’t want to touch’ front anyway.

She is very, very hard to photograph.

So wowhead is now making guides for things still in alpha?

Yeah, who on earth would do that?

Ahem. Let’s peek behind the curtain a little.

There are a lot of reasons to make content well in advance if you have the bandwidth to do so. The simplest reason is, if you sketch out the stuff you know now, it becomes far less overwhelming to keep updated in smaller passes, as opposed to trying to do all in one go later. This goes double for things that are intended to be exhaustive, formatting-heavy, and require a lot of links, like our Class Changes articles. We fully expect to scrap at least half of the info that’s currently in place as the design is iterated, but we have an excellent backbone in place now, and all we need to do is make those corrections as they crop up over time. It’s probably the same overall amount of work, but this way it’s much more manageable.

In a similar vein, based on past events and dates, we can assume that the Overwatch Anniversary event will be happening at the end of this month, so we had Tyler write an article about the dates even though we don’t technically know either the dates or that the Overwatch Anniversary will be returning. The conjecture is based on the previous three years’ events, and people are already googling this topic a lot even though there’s no true answer yet. This way we have the info (mostly) ready to go. Pretty much all we need to do is change the conjecture into a ‘confirmed’ with a link, which is, again, a lot faster than writing the full 300-500 word news article when the sourced info drops from Blizzard.

Now that I think of it, there’s not a ton of difference between being an editor and being a parent. Plan ahead and don’t procrastinate or you’ll be overwhelmed in the moment, kids.

QftQ: Could the “True Throne of Power” mentioned by Azshara after the Xanesh fight be neither a position of power in the Shadowlands nor any seat of metaphysical power. Rather it’s rulership over the Alliance and/or the Horde.

Now Azshara isn’t going to try to conquer the Alliance or Horde, but another Lady Prestor-style gambit may be something she would be willing to attempt. Potentially on both factions at the same time with two different assumed identities.

Just on the face of it this seems somewhat absurd. Having power over literal life and death certainly seems like more power than being the figurehead of a handful of nation-states that seem to care only about getting the slimmest of tactical advantages over each other.

However, at the same time I can kinda see this, just because each faction seems to have wormed its way out of situations they absolutely shouldn’t have been able to, and that “slim tactical advantage” seems to be priceless relics forged by legendary figures when the universe was created more often than not. Yes, yes, I’ll make Loh go, just as soon as I figure out whether the cursed talking dagger or the stone that unlocks an Old God’s prison is better.

Wait, do faction leaders use Simcraft?

Q4tQ: what would it look like if Anduin had a ‘evil’ phase?

If the fanfics I stumbled my way across on Ao3 are any indication, probably really tentacley. Also, Wrathion is there.

I mean, it checks out.

Blizzard Watch is made possible by people like you.
Please consider supporting our Patreon!
Filed Under: Pets
Advertisement