The Queue: Guys, I still like World of Warcraft 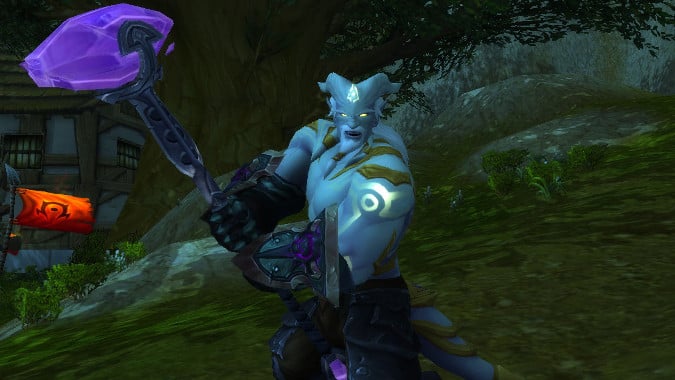 Guys, switching to Lightforged has revitalized the game for me. I’m enjoying it a lot more now, and I really feel like it was the fight move for me. Sometimes that’s what you have to do, make a change to make things work. Of course, it’s still a Warrior, because let’s not get crazy here.

Anyway, this is the Queue. Let’s talk about stuff.

Are there any standout tanks or healers in the SL alpha? On the flip side, are there any that are downright bad?

Keep in mind that I have currently only played a Zandalari Guardian Druid, a Dark Iron Dwarf Warrior, Paladin and Death Knight at level 57 and a variety of Warriors, DK’s and Paladins at levels 50 to 53, I’m not really qualified to tell you if Monks or Demon Hunters are falling behind. But of the four I’ve played at 57, I’d say that all four tanks have pretty decent threat, solid damage mitigation, and are within 2k health of each other (the DK and Druid around 28k, the Paladin and Warrior at 26k, all at level 57 with ilevel 120 starting gear).

I haven’t noticed any healer doing much worse than any other healer but to be fair I probably wouldn’t anyway. I’d say for tanks, they’re getting closer to parity, and I can’t think of one I’d say was too far behind the others. It’s still early days, though. It definitely feels like they addressed the ridiculous HP lead Blood DK’s had, and I’m happy about that. Blood DK’s having an extra 2k health I’m fine with, since they can’t block.

With the rep bonus coming to an end soon, and the exp bonus getting extended, what other kind of bonus you would like to see? Like a rep bonus for old content, increased drop rates, more bees???

Rep bonus would be nice for old content, I know a lot of players were disappointed when the current bonus only applied to select reputations. I don’t know if increased drop rates is necessary or even particularly useful, but maybe WoW could get treasure goblins? Just random loot stuffed Goblins, not even WoW ones, just random demons or some kind of monster with a sack full of loot for us to try and murder.

Sure, why not? While we’re at it, why not the Realm of Greed and Whimsyshire? Just steal everything from Diablo 3 seasons and give us Kanai’s Cube while we’re at it.

I’m not entirely serious, but I do think an interesting but not power increasing buff could be cool. We’ve seen XP and Rep buffs so far, so maybe a discount on Brutosaur mounts?

DON CHALK ASKS ABOUT HERBS IN THE SHADOWLANDS

Are the herbs in shadowlands herbs we’ve picked before? Are they alive or dead? Schrodingers herbs?? what does it MEAN

I mean, are the ores we mine there ores that have been smelted and made into armor? When we skin a Shadowlands beast, are we going to aggro every monster in a 40 yard radius because we’re skinning its friend? And also, is that the spirit of an animal that died and came to the Shadowlands, that’s a more on point question based on your original question. I’ve done quests in Bastion that had me killing flying lion creatures, are they native to the Shadowlands? Do animals that die in Azeroth and other worlds end up as Shadowlands beasts? I don’t know.

LUOTIANX WANTS TO TALK ABOUT GEAR AND REWARDS

I don’t see why earning and picking your own reward, if capped at lower than, say, raiding or high Mythic+, would ever be a bad thing.

At the very least it would be nice if the exact same ilevel of gear didn’t just keep dropping for the exact same slot six times in a row. I mean, seriously, could we get some kind of exchange vendor? Take the 440 pants that dropped from this week’s Emissary and trade it in for, say, 430 boots or gloves or whatever you need a 430 piece in.

‘Unrepentant Horde.’ Yeah. I’m not even gonna try to figure out what that’s supposed to mean.

Okay, look. Ultimately, whatever faction you choose to play, it’s a game. People could repent their decision to play Horde because they don’t like the racial options, or they could be proudly Horde all these years later, and it’s not a big deal. Let’s just all have fun playing however we enjoy it.

The Horde and Alliance in the story of the game are completely out of the player’s hands. Even when we as players have opinions about those factions, it doesn’t have to affect how we view each other. We’re all playing the same game.

ENO WANTS TO KNOW WHAT I’M ON ABOUT

Q4Rossi: Are you still alive? You aren’t wrestling a wendigo are you?

I mean, in a way I’m always wrestling a Wendigo, but don’t worry, I’m okay.

DAVID PRICE ASKS ME A QUESTION ABOUT STAR TREK ONLINE

Since you have been playing STO, how do you feel about the way they handle scaling/leveling compared to the system we are getting in Shadowlands?

I hit level 30 and I was doing the quest with Seven of Nine and Michael Burham and I just kept dying over and over again, and I stopped, and there don’t seem to be any other quests, so I stopped playing.

It feels really bad, and Shadowlands feels a lot better. I admit it could simply be that I don’t understand the game’s progression system, but STO does not feel very welcoming. I feel like I have Starship stuff down, but any time I have to get out of my ship on an away mission, I get destroyed pretty reliably.

I did like how the various Federation eras have quest chains that make it feasible for a ship commanded by a Lt. Commander from the 23rd Century to end up in the 25th. But overall I feel a lot more comfortable with WoW. I am happy I got my Captain ship, and it’s a very pretty Exploration Cruiser.

QftQ: On a scale of 1 to 10, how likely is it that giving Zarhaal all of those odd crystals from Horrific Visions will somehow come back to haunt us in a future expansion?

*Turns to his Ethereal minions who are piling the crystals into a device of unknown origin and purpose.^

Okay, that’s the Queue, y’all. See you next week.

Blizzard Watch is made possible by people like you.
Please consider supporting our Patreon!
Filed Under: Rerolling Makes Me Happy
Advertisement