The Queue: Do your Wolpertingers linger? 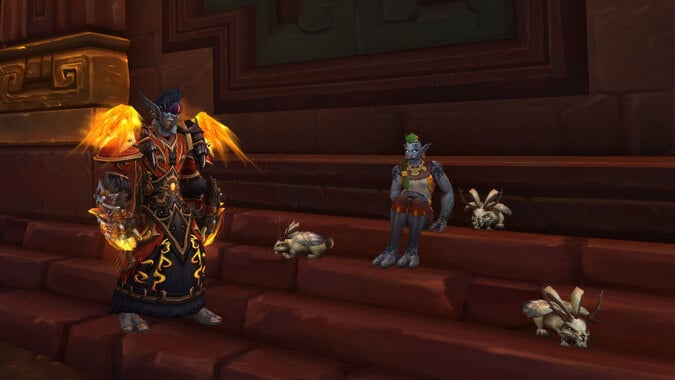 I know that you’re supposed to see Wolpertinger’s when you’re drunk — but I’m stone-cold sober here, I swear! Maybe it’s the lack of sleep?

While I ponder this, let’s go to — the Queue.

QftQ: Every expansion has ended with a lengthy content drought. We accept this as an unavoidable consequence of development cycles, but perhaps there is a solution that Blizzard hasn’t explored yet. An “intermission” storyline that’s intentionally designed to slowly unfold over the course of 6+ months, starting a few weeks after the final raid is fully unlocked in LFR, and ending a few weeks before the next expansion’s prepatch. There would be 5-6 stages to this storyline that unlock roughly once a month, on a schedule that can be tweaked as needed if the next expansion is delayed or ahead of plan.

The long spaces between the final patch and the new expansion can be boring, but I usually look at them as a chance to get caught up on all those little things that have slipped through the cracks while everything was new and shiny. Pet battles, old raid farming, leveling characters — the list is long. So having all of that time there to get things done without new stuff is nice.

But I would love more story content at the same time. Your idea is good, but stretching a story out over multiple weeks hasn’t been done that well in expansions past. So I’d tweak it slightly to be just a self-contained quest-chain each week. That way you’ve got some closure, and if there’s something that you’re not that interested in you don’t feel obligated to do it so you can see next weeks chunk.

Who do you think will be the next Hero added to Heroes of the Storm?

Do we know how Nathanos got out of Nazjatar? Last time I remember seeing him is when you first get there.

The next Heroes of the Storm hero is going to be a dark horse candidate. I’m thinking we’re due for another rank and file Starcraft 2 unit. Maybe Phase-Smith Karax? He’s got a great silhouette with those Doctor Octopus arms on his back. I know his co-op commander kit involves a lot of things that Artanis and Probius already cover, but the Spear of Adun is a big ship. I’m sure that they could come up with a few more abilities for it to contribute to the battlefield.

Q4tQ: I want to start tanking on my warrior, but so far world quests have only offered me shields as a reward. How long until warriors can duel wield shields as prot?

Two-shield tanking is just simple math. If one shield is good at protecting you, then two shields should be twice as good! It must surely be an oversight that we can’t already do it. Or Blizzard tested it and found that it was simply too powerful. It would be Gladiator stance all over again — every Warrior would be running around double strapped.

QftQ: Is there WoW dungeons that, even though there is nothing wrong with the design or anything, but just the thought of running them exhausts your soul? Or is that just me?

The first dungeons that jump to mind are The Opening of the Dark Portal, Violet Hold (either one), and Siege of Niuzao Temple. There’s nothing inherently wrong with them, but man do I not like the waves of enemies mechanic. They’ve all been sped up from their original incarnations, but it still feels too slow for my tastes.

But there are two dungeons in Battle for Azeroth that I have to be dragged kicking and screaming into — Siege of Boralus and Tol Dagor. I’ve been in too many Siege’s where the group doesn’t know how to deal with the first bosses mechanic at all. Otherwise promising Mythic Keystone runs scuttled on the first boss. Now the dungeon has been irrevocably tainted because of those early runs.

As for Tol Dagor — it knows what it did.

WoW developers have talked a lot about Shadowlands letting players express themselves more (with customizations) and how they don’t really want to limit players in any way anymore.

So, theory: Blizzard is planning and currently working on lifting the race/class restrictions across the board.

But before they can do it properly they need to create a lot of Druid form models – and possibly even Metamorphosis forms for Demon Hunters, so it will likely not be ready for 9.0

Right now the only difference between a Night Elven and a Blood Elven Metamorphosis is that the Night Elves stay purple, and the Blood Elves are a reddish color. So there’s nothing saying that any other new Demon form is given a wildly different appearance. Maybe Tauren could have their antlers in place of the Demon horns that they get. The bigger task would be making each race fit the animations. Have you ever used one of the transformation toys while playing a Demon Hunter? Nothing funnier than watching Tauren sprout wings and glide around.

Druid forms are a little tougher — but here’s how I would set things up. Make only one set of new forms for each faction. All of these new Druids would have the same teacher, so it makes sense to me that they’d all learn the same kind of set up. Obviously make them super cool and interesting, like a giant Scorpion for tanking or a wolf/cat hybrid for Feral form. But that would cut down on the amount of work necessary to get the rest of the races Druid ready. You could even make all of the different racial forms Glyphs so that you could pick and choose which you’d like to be.

I really hope that we get the class restrictions opened up. Back when they did that in Cataclysm it was the kick in the pants I needed to make a Mage. He’s an Orc and in-between hitting the spellbooks, it looks like he spends a lot of time lifting heavy things. I’m sure that there are lots of people out there who’d love to make a Night Elven Paladin or a Tauren Rogue. If only they were allowed to.

Before I go I’d like to once again say congratulations to Pidia for the engagement! Here’s to many happy years together!! Also, Happy Birthday Red!

Don’t forget to leave Anna lots of questions for tomorrow — have a great week everyone!