The Queue: He sees you when you’re sleeping 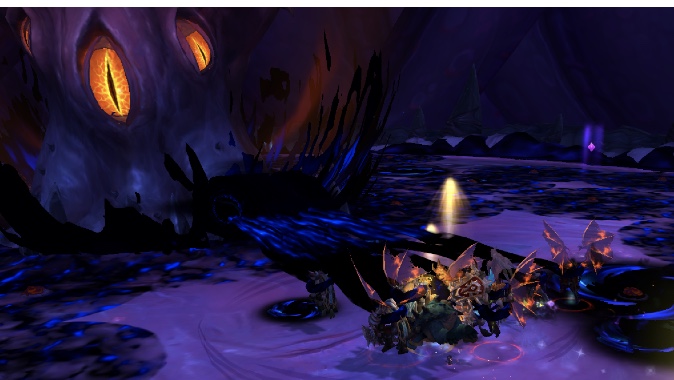 I think in the end, N’Zoth really just wants a hug. Why else would it keep pulling you in with its shadow tentacles? It wants a hug and then it’s upset when we reply with violence. It’s a sad story.

My little Goblin Hunter hit 120 last night, and I know it’s been discussed a lot around here, but any suggestions for getting her ilvl up to a reasonable level as efficiently as possible would be appreciated. I did enough WQ’s in Voldun last night to get the Azerite stash that they were offering so she has a 385 helm, as well as a few 325 pieces.

World Quest gear is great and it scales up to ilevel 445, but what it drops is based on your current item level, so it’s best if you can boost your gear in other ways to get better WQ rewards.

If this is an alt, getting reasonably geared is pretty straightforward: Benthic gear from Nazjatar is bind on account meaning you can mail it from your main to your alt, even if your alt is on a different realm. It drops and is rewarded for completing quests in Nazjatar, or it can be bought with Prismatic Manapearls. It’s item level 385 and can be upgraded, which is a good start on the end game. BOA gear also drops randomly from assaults, and if they’re ilvl 410 are a huge boost over your leveling gear.

If you don’t have a main to grab BOA gear, the grind will take a little longer.

The next step is to start Nazjatar. After doing the starting quests, Magni will ask you to come see him, and he’ll boost your neck up to level 50. Nice.

You should also hit up the Legendary cloak quest. That’s another huge upgrade even if you never bother to level it up from there. The quest chain is long and can be arduous if you’re undergeared, so take it slowly and carefully — but it’s worth it.

Fill in the rest with World Quest Emissaries, Warfronts (Darkshore is better), World Bosses (in Nazjatar or the 8.3 Assault zones), and any raid you’re high enough level to queue into. I find large group content is more forgiving, because nothing is wholly reliant on your skills. If you aren’t sure what you’re doing, stick with the group and try to pick it up as you go.

Q4tQ: what kind of color variations in armor sets do you look for the most? Asking because there’s a green variant of this set, and now I want it for my demon hunter.

I am eternally trying to match metallic colors, because there is no single gold, bronze, or copper color — most pieces of gear have slightly different shades and none of them match.

How many different kinds of gold can there even be? Apparently lots!

Would cancelling BlizzCon be such a big deal? I see fantastic opportunities for an online only Con. All their energy can go to panels. They might even introduce playable demo’s through Stadia (YouTube deal).

Yes and no. The overall presentation of information would be totally fine if presented online. And if they gave us demos to play at home that didn’t require us to wait in lines, that would be an amazing improvement on the BlizzCon experience.

And then there’s the social element. A lot of BlizzCon attendees use the convention as a chance to meet up with friends they otherwise only see virtually. It’s this opportunity to meet people you’ve played with for years but never talked to face to face — and that’s pretty heckin’ great.

No matter what the trappings of the game, we’re all here because we enjoy playing it together. It really is about the friends we made along the way.

Could we do a digital BlizzCon? Sure. Would it still be fun? Sure.

But it would be a different sort of fun, and it would lose some of what makes BlizzCon… well, BlizzCon.

My favorite is Il’gynoth. There’s a lot to juggle and enough randomness to keep you on your toes without the fight feeling impossible. You have to pay attention to Il’gynoth’s death ray, dodge gunk on the floor, avoid/kill focus add, target swap, avoid mind controls… it’s a lot.

Carapace actually fits a lot of those qualifications, too, but those tentacles. Ugh. What a headache. N’Zoth itself also fits some of those qualifications, but the fight feels difficult in a way that’s beyond player control. N’Zoth doesn’t leave a lot of room for error, and if you lose more than a player or two, the best thing to do is call a wipe and try a fresh pull. There’s no amount of skill that will help you recover from a bad N’Zoth pull, and that’s not fun.

But N’Zoth isn’t actually my least favorite fight. The Old God offers some unique challenges and I do enjoy a boss fight that you have to put a significant effort into. You eventually develop a rhythm that you naturally fall into with practice. You don’t get that — or at least I don’t get that — on bosses that just fall over for you.

Drest’agath is my least favorite fight, because it’s a long fight where I have almost nothing to do. There’s not a huge amount of damage, adds are scattered everywhere (which means players are scattered everywhere and out of healing range), there are walls of dust that block line of sight, long stuns, and you can’t even damage the boss most of the fight. I spend 90% of the fight dodging bad stuff and running around to keep people in range.

Q4Q: What allied races do you hope they add next?

How realistic are those hopes? Pie in the sky? Or real possibilities?

I think playable Naga would be fun. While they’re all presented as fanatically devoted to Azshara, there’s no way everyone was thrilled about being turned into Naga without their consent — even if it was the only way to save them at the time. There are some interesting story possibilities there… and also Naga just look cool.

I’d also like playable withered Nightborne. Not the mindless ones, but we met a lot of Nightborne like Thalyssra, who was essentially sentenced to death when she was cast out of Suramar City. But some of those outcasts found a way to survive despite the physical toll it put on them… until several dozen quest chains later they’re all perfectly healthy elves again. Erasing the signs of the suffering that made them what they became never really sat right with me.. Something about making them all look “normal” again didn’t entirely sit right with me. Cue Illidan “I am my scars!”

It’s been pointed out to me that Tuskarr ought to be on any list of races that should be playable. They were wholly unique and relegated to a single expansion.

Honestly, I’m happy with the new customization options. But new races would be icing on the cake.

With all the new appearance options being previewed by Wowhead, if they all get loaded…

Qs: How much time will you be spending in the barber shop?
Do you think that we’ll get body type variations in an expansion or two, even if they’re just presets from a list?

If I change my characters too much — particularly characters I’ve played a long time — they stop feeling like “them.” My Mistweaver has changed haircut and hair color a couple of times to match transmog, but always goes back to buns with dark pink hair. That’s just her!

My Blood Elf switched from green eyes to gold eyes when they became available, but I’ve never changed anything else. There are tons of cool new hair options… but It would feel weird and wrong.

As to body types, I hope they make their way to live, but right now I feel like Blizzard is more likely to offer varied body types via different Allied Races rather than letting everyone have sliders. I’m not holding my breath on that one.

And that’s all for today, my friends. I wish you all health, happiness, and a relaxing weekend.