The Queue: Vexed no more 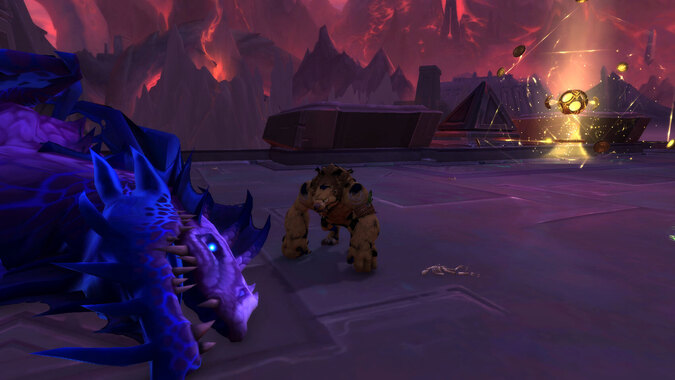 That’s one big purple dragon that I’m not worrying about anymore. Just like we’re over halfway through the year, so am I just over halfway through Mythic Ny’alotha. I’m loving these fights on Mythic, but I’m really really not looking forward to Ily’gnoth. Lucky for me there are still two bosses between him and me.

While I keep storming the castle, I take you now to — the Queue.

RJAGODA WHEN THE SUN SHINES, WE SHINE TOGETHER

I was about to say that my favorite raid was Battle of Dazar’alor, but I just can’t wholeheartedly endorse it because it just really feels like it needs a skip, or two even! After x victories over the 3rd and 6th boss, I think you should’ve just been able to skip right to those parts of it. It breaks itself up into such nice even thirds. I think my favorite raid is probably Ny’alotha. It’s got the best layout, the best variety of fights, and all the eyeballs and tentacles you could ever want.

As for fights, that’s a lot tougher. I’ve said before that I think Vexiona is the best out of Ny’alotha — she’s a dragon, and tanks get giant laser beams — but after having just beaten her on Mythic as I’m writing this. I think she’s my favorite of the expansion.

It’s an amazing fight on Mythic. There are only two small changes to the encounter. There’s an additional type of minion she summons that does an AOE stun just after yanking a couple of players right to it, and in the final 40%, you get to fight her while a Void dragon does Twilight Decimator over a third of the room at once. Easy, right?

It turns out that having the giant Decimator every 30 seconds in the last phases messes with the rhythm of the fight just enough to make things tough but never unfair. It was just really satisfying to nail the movements properly. The group stands in the middle until the Twilight Decimator is about to come through, then everyone slides to the balcony to dodge it. At the same time I have to be moving towards my co-tank so we don’t get feared by her Heart of Darkness, and right after that goes off we split apart so that I don’t get hit by her Dragon fire. By then the Void copy is getting ready to unleash another Decimator that will bathe the balcony in inky destruction so the group slides back to the middle of the room. Where I stack with my partner again to help split the damage from Desolation.

It pretty much means that I’m not really standing still for long, there’s always something to be paying attention to. Which is way more engaging for a tank than just a fight like Ra’den or Shad’har where I pretty much just stand in the middle of the room and swap at two stacks of the debuff.

The best fights are like beautiful dances — where at the end you get shiny loot.

TOLD YOU LUOTIANX WILL BE HERE FOREVER

Why is my Hubby breezing through his assaults on his ele shaman when my better geared monk struggles so hard?

It’s probably an inbuilt bias to make things easier for Shaman in general. Did you know that Thrall is a Shaman — it’s true!

More likely, it’s just slightly easier to be ranged sometimes. You have the chance to mostly kill something before it can even close the gap with you, and Shaman in particular have a lot of mobility combined with a lot of utility. Did you overpull? Time to hit that Bloodlust button and drop an Earth Elemental.

Keep up the Monk action though, you’ll have the last laugh when you can use your Chi Torpedo and Flying Serpent kick to reach that chest over there before it despawns.

What is a song that you liked that got ruined by virtue of being over played by friends and/or radio? So much of the 90’s I am still recovering from.

I can’t stand it anymore. It was all over the radio station I listened to back in ’02. I liked it at first, but man does it set my teeth on edge now. Because of it I never really got into Coldplay at all. Blue by Eiffel 65 is also on that list.

SOEROAH TOOK AN OATH, I’MA STICK IT OUT TO THE END

My question is what if it were handled like this:

At the end of a zone storyline when it leads into a dungeon, you get a solo player (or party if you are leveling with a party) scenario version of the dungeon where you go in with the relevant NPCs and play through the dungeon. This is the ‘canonical’ version of the dungeon, and it exists as a capstone for the zone, to let you see the whole story as a solo player. There aren’t any rewards other than the hefty end-of-zone quest reward for completing it.

Yeah, that’d be cool. They’ve even added something similar to that with the new players starting area that’s coming in Shadowlands. At the end of all the questing, there’s a mini-dungeon where you go beat up an Ogre Necromancer. But the tank and healer roles are filled by NPCs so you don’t have to worry about knowing the route. You’re there for the ride.

It might take some work on the artificial intelligence, but I bet you could tweak the Island Expedition bots into a dungeon team for players that wanted to do dungeons solo. Maybe give the player an extra action button to help direct them around the area, so if there were profession items or a quest off the beaten path you could still snag it.

Honestly, that’d solve a bunch of problems. Like getting quests done while leveling through old content. If you need a specific dungeon and you’re not a healer or tank, you could be in the dungeon finder forever before a group is formed.

GINAC YOU CAN STAND UNDER MY UMBRELLA

Q4tQ: When you play an RPG, whether single player or not, do you create your character specifically to take advantage of the game’s lore, or do you just create a character based on something else that you are drawn to?

On my first character or playthrough, I’m going for just what I think looks the coolest. My very first Warcraft character all those many years ago was a Dwarf Hunter with a bear pet because I just watched a badass cinematic where there was a cool looking Dwarf Hunter hanging out with a bear. Same with my second character who was a Draenei Paladin because I just saw Maraad with that giant purple hammer in the Burning Crusade cinematic.

Eventually, I started making more characters to get more of the story behind stuff. I made a Monk so that I could visit the Wandering Isle and see how their class story unfolded as they leveled up at the Peak of Serenity. Every character I’ve made recently is so that I could check out a new Class Order Hall from Legion.

Even in our Blizzard Watch D&D games, I went for what seemed coolest first. I wanted to be a badass Elven fighter with a glaive. Or a flashy loudmouth hacker with a cyber-monkey. But credit to the Shadowrun module Joe had us make our characters from, a lot of the character of Bubbles and his cyber-monkey Bowie came together as I was building my character from the options they gave me.

That’s it for me today. Stay safe and healthy everyone! Don’t forget to leave Anna lots of questions for tomorrow!