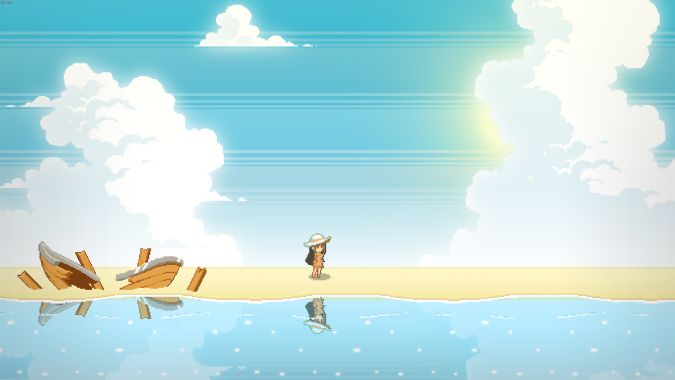 Nowadays, it’s hard to find a game that doesn’t demand your attention after the credits roll, and while Evan’s Remains does technically do that, it’s only for a few moments to provide a bit of a bonus for some of the game’s Kickstarter supporters. But once you’re done with the game, you’re done with the game. No daily quests, no “go back and collect every knickknack” aspects — just a delightful puzzler with a story whose ending I doubt anyone will be able to see coming.

Evan’s Remains, then, is a great way to spend an evening challenging your mind with puzzles while fawning over just how gorgeous pixel-art games can be. Let’s break down the good and bad of Evan’s Remains.


What kind of game is Evan’s Remains?

For starters, Evan’s Remains is a puzzler that has you playing as Dysis. You’ve been asked by a mega corporation to come to a mysterious island and find someone named Evan. When you get there, you find monoliths scattered about, and to get past them, you have to solve their puzzle. Solving the puzzles involves moving various blocks all over until you can get past the large green pillars that block the exit. Certain, unlabeled segments (like the two larger ones above) will disappear after you jump off them, and hitting other blocks will cause those segments to either reappear or disappear, depending on its previous state. It probably sounds more complicated than it actually is, and the game eases you into the increasing complexity of puzzles at a pace that never feels too fast.

As you progress through puzzles, you encounter Clover, who’s on the island for his own purposes. Eventually, you two team up to solve the greater mystery of the island and its monolith-puzzles. As you do, you learn more about Clover, Dysis, the island itself, and the mysterious “Evan” who set this whole thing in motion. 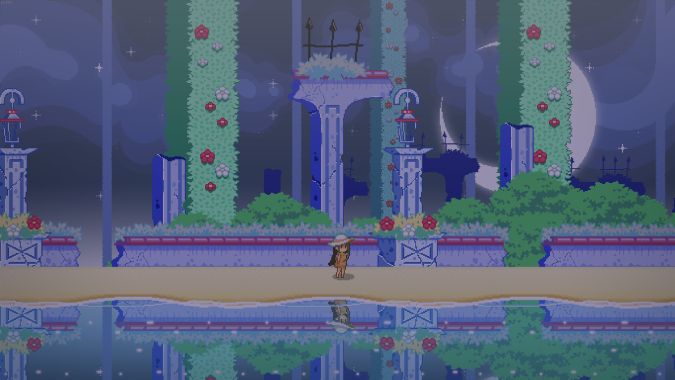 The graphics, puzzles, and music in Evan’s Remains are all very good

I’ve said it already, but Evan’s Remains is a very, very pretty game. Screenshots don’t quite do justice, because a big part of the appeal (for me, at least) was the parallax scrolling that really brought the whole thing to life. But even without seeing that in action, it’s easy to see how the game’s art is going to be a major selling point for fans of pixel-art or well-made indie games.

The puzzles themselves are another big draw. Understandably, the first few start out pretty easy. But it doesn’t take long to hit a point where puzzles are hard enough to feel rewarding when you beat them but never so hard that they feel impossible. And if one does manage to stump you, the game provides you with the ability to skip puzzles, which is very handy and not something I expected. Frankly, I wish there had been more puzzles — they’re the type of challenge that, if I had an endless supply of, I could absolutely see myself using a level or two as a way to break up my day when I need some mental stimuli. In that sense, I’m hopeful the game gets more content in the future — or even just another title from the developer that sees these types of puzzles expanded to ridiculous levels of challenging. There’s a lot of potential here, and I’d love to see it lived up to.

The music is also a point the game has working in its favor. It’s not going to provide any bops the way Undertale does — few games do — but it always fits the atmosphere in a way that’s hard not to appreciate. In this sense, the music is reminiscent of what you might find in Stardew Valley. 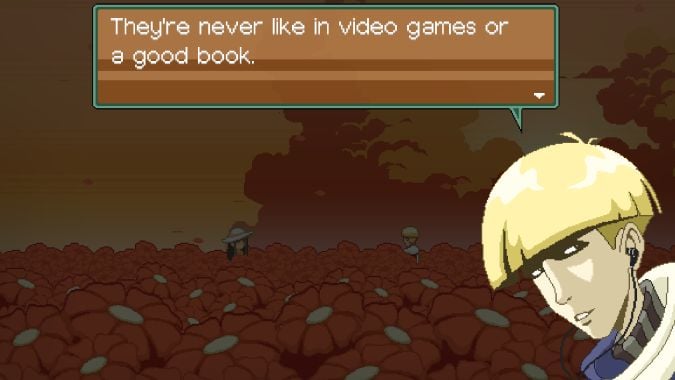 I want to be clear: While I do have complaints about the game, they’re all relatively minor. The story — which I’ll get to in a minute — is likely to be the biggest point of contention for players. Everything else here is that one-third-letter-grade difference that won’t make or break the game for anyone.

With that in mind, the game’s dialog can sometimes be a bit too meta. There were plenty of times when this worked — after completing one of the initial puzzles, Dysis comments that she doesn’t want to just swim around the monoliths because she spent too long getting ready and doesn’t want to get her clothes and hair wet. There’s a bit of stereotyping built into that, but it at least provides the player with an in-world reason that Dysis wouldn’t just go around all these puzzles. Other times, however, dialog utilizes the kind of meta humor that doesn’t really work. This is largely because these moments don’t happen quite often enough to make this a Deadpool-like experience full of it. But that also means there aren’t so many of them that this point is anything but a minor quibble.

Another complaint I have is that — to the best of my knowledge — you can’t go back and play individual puzzles once they’ve been beaten. And because the game is auto-save, one-file only, you don’t have any way to get around that. A puzzle-select feature would go a long way, especially if you want to show off the game to someone who’s on the fence about the gameplay. 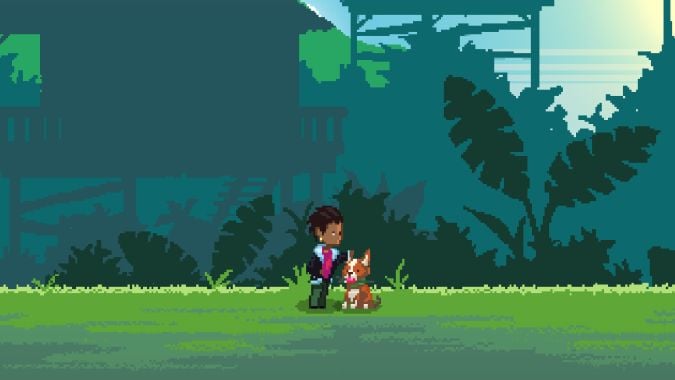 Yes, you can pet the dog in Evan’s Remains.

The story, however, is going to be divisive

You’ll notice the story gets its own section separate from the good or the bad — that’s because Evan’s Remains chooses to tell a very specific story, and reactions to that story, I imagine, are going to fall into “love it” or “hate it” camps, without much in between.

For 95% of the game, I felt like a mystery was unraveling. Frankly, the idea of a mysterious island you can only get to by following specific coordinates and that may have ties to a mega-corporation gave me some strong LOST vibes. And I love LOST. But like LOST, the ending is going to leave a lot of people feeling… mixed.

It’s hard to comment too heavily on the ending without spoiling it, but I will say, I don’t think it’s an ending anyone will see coming. Outside of one pretty major point (which can technically be explained away), the ending does make sense. But it’s not the kind of twist ending that was in your face all along — rather, it’s one that pulls the rug out from underneath you in the name of a larger point about compassion and humanity. Personally, I enjoyed it. It unabashedly knew what it wanted to be, and it stuck with that. (Again, there’s a bit of a LOST vibe here.) But it won’t be for everyone.

That said, even if you’re the type who will dislike the ending, I still recommend playing the game. The puzzles are fun, the graphics are gorgeous, and it’s a game you’re not likely to forget anytime soon. And at roughly 4 hours or so of gameplay, the experience goes by quickly enough that you’ll likely find yourself wishing for even more puzzles to solve.