Okay, first off, I love the idea of High Elves as an Alliance Allied Race. I would have been thrilled if Blizzard had done that. But they didn’t, and I’m not getting the sense that Allied Races are going to be a big feature of the game going forward — it was added for Battle for Azeroth, got some late options for Legion that existed to bridge the gap between expansions, and it definitely doesn’t feel like we’re going to see more of them going forward, at least not as many as we have since the end of Legion. But with the customization options in Shadowlands that will make it possible for Blood and Void Elves to basically look like High Elves, we now have to wonder — does this change really count? If you roll up a Blood Elf and choose the options to have blue eyes and darker skin, are you playing a High Elf?

No. No, you’re not. You’re playing a Blood Elf. Just like if you make the exact same choices on a Void Elf. You’ll be playing a Void Elf, not a High Elf, with the racial abilities and starting experience of a Void Elf. These characters are not High Elves, with the specific story and lore of that group of survivors. 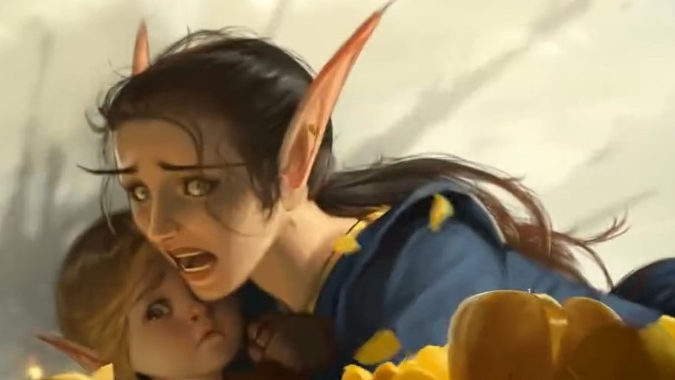 High Elf customizations are a better overall option for both factions

To a degree, this means that Blizzard doesn’t have to pick a faction and canonically say, “The High Elves are this.” They don’t have to come up with a starting experience, a quest chain to unlock them, a new reputation grind. If you want to create your own headcanon that your new Blood Elf Paladin is actually a High Elf? Go ahead. It’s not going to be reflected in game — everyone will still call you a Blood Elf, you’ll still start off in Silvermoon, you’ll be a Blood Elf in all ways that the game tracks.

I understand the disappointment some players might feel here. For one thing, they’ve spent the past decade painting most of the remaining High Elves as Alliance stalwarts and an opposition force to Blood Elves, with Vereesa Windrunner as the leader of the Silver Covenant and a major force for loyalty to the Alliance. Between the High Elves who remained at Allerian Stronghold in Outland, the Silver Covenant forces under Vereesa, and the forces seen in Battle for Azeroth taking part in both the Battle of Stromgarde and the attack on Orgrimmar, it seems clear that what little canon exists for the High Elves at present portrays them as members of the Alliance. Not getting the chance to be High Elves, but to simply look like them, is galling to players who have wanted that status made more solidly canonical.

Leaving High Elf heritage vague is for the best

But the fact is, the High Elves are a fraction of a fraction of their former people. There are probably more Void Elves than High Elves at this point. And while Lor’themar exiled the High Elves during the events of In the Shadow of the Sun, he also attempted (and was rebuffed) to offer the High Elves of Quel’Lithien Lodge aid and supplies, an offer they rebuffed and later suffered the costs of that decision. So there are lore reasons for the return of some High Elves to Silvermoon and the Blood Elves, between the presence of Captain Auric Sunchaser at the Sunwell and the loss of several lodges of High Elves as their numbers decline. It makes sense that some High Elves might be tired of fighting their own kin and seek a reunion.

Between the effort that doesn’t need to be expended designing things like zones, quests, and storylines to allow the new race and the canon reasons Blizzard may not want to have to settle the High Elf question, making these options accessible to all Void and Blood Elves makes sense. It lets players play the story in their head without making it explicit, so the story of Valeris the High Elf who went back to Silvermoon to reconnect with her people and the story of Ashiela the High Elf who survived the mana bomb at Theramore and joined up with the Silver Covenant determine to protect her people from such aggression in the future are both still possible.

Smuggled past the faction war

In short, it’s a backdoor to a kind of cross-faction play that World of Warcraft desperately needs. I mean, imagine if you could play an Orc who wants to live at peace with the Alliance, and even makes friends over there? A Forsaken who moves back to Stormwind and finds acceptance from her living family members? A Night Elf who finally returns to Suramar and finds her family members who are now Nightborne? Letting both factions have individual members of the High Elves come and live among them means you have those kinds of stories. I’ve always been surprised the Dark Irons ended up an Alliance race, considering how many Dark Irons Alliance players have killed over the years.

Several Allied races like Highborne, Vulpera, Void Elves, and even Lightforged might have made more sense if there were a way to play them on both sides of the faction divide, based on their storylines as we first encountered them. So seeing High Elves as a cosmetic option for both Blood and Void Elves is an interesting result in my eyes because it cracks that door ever so slightly open. It moves the needle slightly. I think it’s a good option and I’m glad to see it pursued. I’d love to see both Draenei and Lightforged get Broken as an option, Humans and Kul Tirans get Vrykul looks, Wildhammer tattoos for both flavors of Dwarves, Yaungol and Taunka options for all Tauren, and more. I think it’s a great solution.

Your Blood Elf is still going to be a Blood Elf even if you make it look like a High Elf. And that’s great news.