The Queue: So we meet again on these fields of battle… 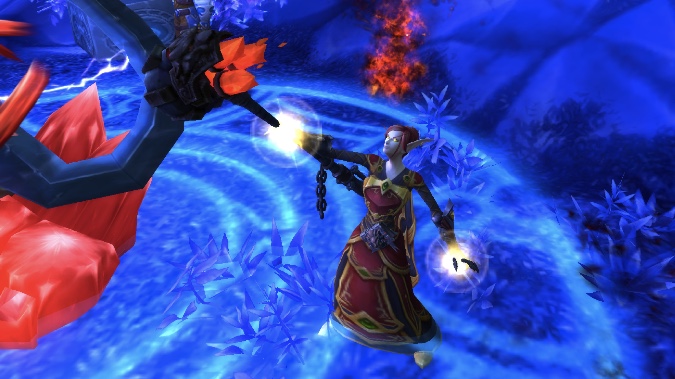 Somehow another week has passed, with every day feeling like it’s vanished in no time at all.

And yet also it feels like it’s been a million years since we last spoke, Queue. Where have you been? Why have we grown so distant??

But let us not dwell on the vagaries of time. Let us speak and be merry while yet we can.

Q4tQ: is Hogger in the Shadowlands?

For Hogger to be in Shadowlands, we would have to assume Hogger actually died. Since Hogger has been continually respawning for nearly 16 years, I don’t know if we can say that for certain.

No one stays dead in World of Warcraft.

Here’s hoping that somewhere in a green corner of the Shadowlands, Ol’ Blanchey and Twinkles are peacefully grazing.

Okay. Let me revise my previous answer: no one stays dead except for Ol’ Blanchey.

Is being able to extend raid lockouts a good or a bad thing for the health of the raiding community (both from a player point of view, and for the community/raids as a whole)?

I think extending raid lockouts is a good thing for the most part. It means that with a huge raid like Ny’alotha, you can lock on the boss you’re working on and keep working on it week to week, instead of the long grind to reclear every week. Being able to lock can save a lot of tedium.

I’ve run raids with groups that never lock, groups that lock when they’re geared up, and groups that always lock (this last being a casual group that tended to raid a couple of hours a week and always used raid time for progression). All of these strategies work, and being able to extend raid lockouts lets all of these groups play the way that works best for them.

My complaint about raid lockouts, and extending raid lockouts, is that (in my experience) sometimes it’s just buggy. Sometimes your lockout isn’t what you think it should be. Sometimes you have to jump from player to player to find the “right” version of last week’s lockout. Sometimes the wrong person zones in first and messes the lockout up. It can be frustrating, but overall I think it helps more than it hurts.

Why is Blizz being so coy about the Corruption rotation? What is the benefit to them as a company?

I think there’s a value in RNG — to an extent.

If everything were wholly predictable, it’s easy to get bored. There’s a certain excitement to randomness that makes it fun. Of course, on the flip side, randomness that means you continually don’t get the things you want is frustrating — so there’s a balance to strike. That’s where things like bad luck protection systems (where you have a greater chance to get something every time you don’t get something) and token/currency systems (where no matter what happens, you earn something you can use to get something you do want) come into play. It lets you have the fun element of randomness without letting randomness keep you from getting anything good, ever.

Of course neither of those apply here. Blizzard could just publish a list, but instead it’s about the thrill of surprise. And, to an extent, it’s always going to be. The unexpected is what keeps us logging on, just to see what happens. And Blizzard definitely wants to keep us logging on, so there’s some definite benefit to keeping the unexpected… well, unexpected.

If/when we get gnome druids what should their forms be like?

Slightly chubby baby versions of the traditional forms. So a bear cub, a kitten, a little hatchling bird, a very round baby moonkin. The only exception is for the aquatic form, which should definitely be a goldfish.

My mage main was lucky enough to finish the Emerald Nightmare/Nighthold tier last weekend, so she’s wearing the purple robe with the scrolls on the sides and the dagger on the belt. And goggles, because she’s an engineer. But my demon hunter is now trying to get the rest of the leather leveling greens from Vol’dun, because they’re awesome.

My Blood Elf has been wearing the heritage armor (most of it) for quite a while, transmogged with the Holydin hidden artifact appearance in red. It’s a nice look that says I’m dignified and elegant, but also I’ll smash you in the face if I need to.

My Gnome is a little more mixed. I’m not a huge fan of their heritage armor — it has some nice pieces, but it’s not terribly iconic. And as a Gnome, a lot of armor and weapons just look odd because we’re so short. Sets that look awesome on other races can look squished on Gnomes. So I don’t wear a lot of sets and I tend to switch around a bunch.

What Alliance or Horde city has the best layout to work as a kart racing track?

Silvermoon City. It has a big loop, but with just enough twists to keep it interesting.

Right now I’m playing a Holydin on Horde and a Mistweaver on Alliance, but I’m not entirely sure I’ll stick with it. Even though I have my buttons laid out basically the same, I always have some mental lag switching back and forth which I think makes it harder for me to play them both at a high level. So I may change that up… I’m just not sure what I’m changing to.

And that’s it for today’s Queue, friends. Hug your loved ones, give your pets a scratch behind the ear, and support your friends, because life is short and acts of kindness can go a long way.

P.s. If your pet is a goldfish (or really any kind of fish) the above advice may not apply.