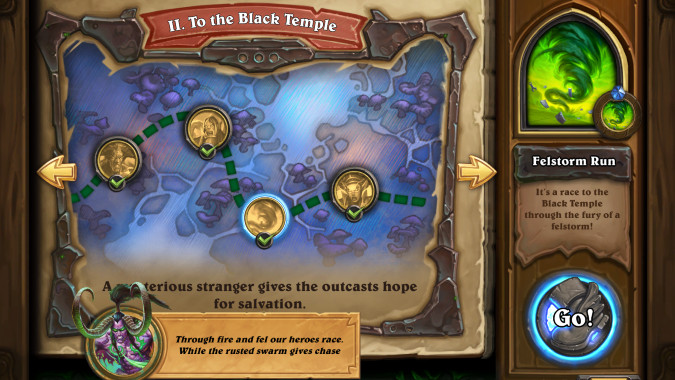 The first major roadblock players might encounter in Hearthstone’s newly-released adventure, Trial by Felfire, is the Felstorm Run encounter. You need to survive until the turn timer counts down to zero. But, as most players will find out, the AI places more and more minions as the game goes on, and it’s very easy to get overwhelmed.

Well, fear not! We have a winning strategy for you. If you follow it to the letter, your chances will significantly improve.

Spoiler alert: it involves always keeping your hand as full as possible, by not playing many cards — while abusing your Hero Power. 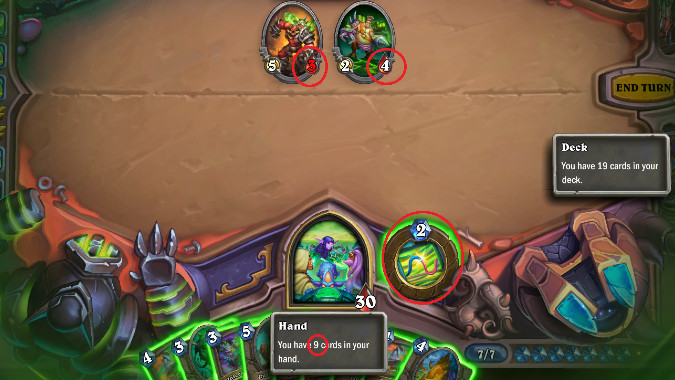 You hero power deals one damage (split between all enemies) for each card in your hand, so start by taking a good look at the initial board the AI has when you start the encounter. Can you kill it using your hero power? If so, do it, and pass. If not, restart the encounter until you do.

Take a look at the above picture: nine cards in hand, and the enemy board has seven total health. What to do? Use your hero power, and pass. That’s it. That’s the ideal turn, that you want to see as often as possible.

Play order is important. Remember to maximize your hero power before playing cards — unless playing said cards would result in more damage than the damage you will lose for having one less card in your hand. For instance: if you see four two-health oozes on the board, and you have Exhaust Backfire — that card that deals two damage to every enemy minion — don’t use it, if your hero power will deal at least eight damage. It’s easy to overlook this. Which is why the first thing you do, before playing any cards, is math.

It bears repeating: even if it looks tempting to do so, don’t play cards. You’ve got a Target Dummy, which costs zero? Keep it in your hand. One less card in your hand is one less damage from your hero power every turn. That’s far more important than the measly two damage it would block.

In fact, save all your minions for as late as possible — preferably, only play them if their presence means that, on the following turn, an enemy minion will attack it and die.

The winning strategy is to keep both boards empty the whole time — yours, by not playing anything and the enemy’s by clearing it with your hero power. 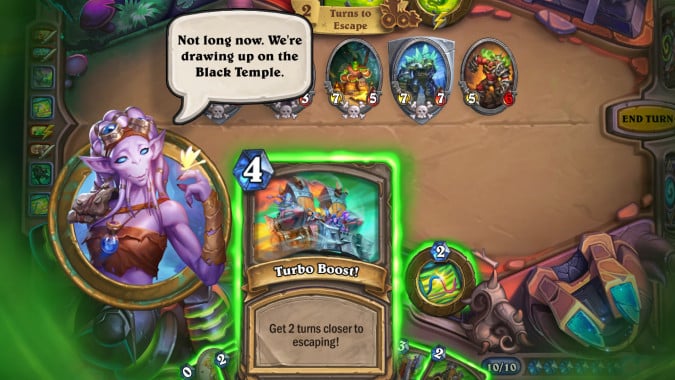 Key cards to help you survive past the early rounds

Keeping the board clear with your Hero Power will work for a while. But at a point, you’re going to need to use other tools to survive long enough to escape.

I wouldn’t say that “the only winning move is not to play,” but it’s close enough. Playing as few cards as possible, keeping your hands full, and using your hero power to clear as much as possible, drawing cards when necessary to facilitate this, and saving up on your best cards (Exhaust Backfire, Infernal Cannon, and Turbo Boost!) for the late game should net you your victory. You’ve got this!

Blizzard Watch is made possible by people like you.
Please consider supporting our Patreon!
Filed Under: Ashes Of Outland, Felstorm Run, Hearthstone Adventures, Hearthstone-adventure, Single-player
Advertisement