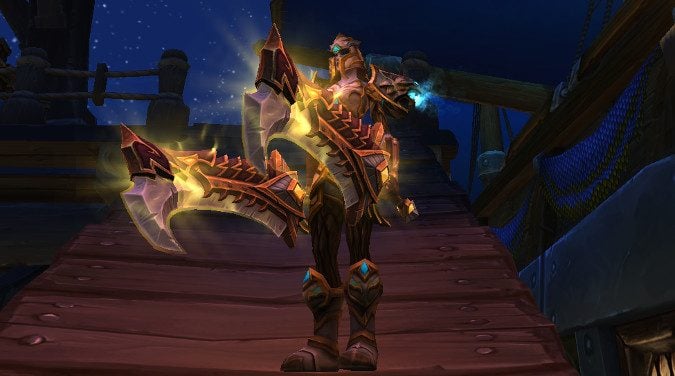 Last Saturday, I woke up around 5 am with a shooting pain in my eye and black, sqirming shapes floating in my field of vision. This wasn’t a new experience. I have had it before, and a visit to my retina specialist confirmed that a blood vessel had exploded inside my eye, leaving blood trails between the retina and the lens floating in the vitreous portion of my eyeball. I was given an injection, and hopefully the blood will be reabsorbed by next week, because the next stage would be surgery — actual surgery, with scalpels and everything, and not merely the laser surgery I undergo a few times a year.

Anyway, as you might expect I haven’t been playing a lot of video games this week. Mostly I’ve been watching the loathsome blood eels writhe around the inside of my eye. It’s really distracting trying to focus on things while these odd shapes coalesce and then dissipate into greasy swarms of black dots.

It’s the Queue. Let’s see what y’all are talking about.

UIYA WANTS TO KNOW ABOUT WARRIORS AND THE WEAPONS THEY LOVE
Greetings. Question for the warriors all knowing expert. How do you feel about the return of Titans grip and single minded fury. I never played warriors when that was still a thing so I was wondering how y’all feel about it.

Well, Titan’s Grip didn’t go anywhere — I have plenty of screenshots on this site to prove it. And it’s one of my favorite abilities any class ever had. I’m on record, back when Legion was on the horizon, as saying that if I had to choose between Titan’s Grip and Single-Minded Fury (I did) that I would prefer Titan’s Grip (which is what Blizzard gave us).

That being said, I am very happy that Single-Minded Fury is making a comeback. It’s always cool when players can have a playstyle they enjoy and I’ll likely try and focus on SMF for at least one of my Warriors in Shadowlands.

BENDOVER WANTS TO TALK LORE AND THE MACHINERY OF DEATH

Is there an official timeline for the Legion and BfA zones, as in, what order things canonically happen, what happen roughly at the same time? Just watched Bellular’s speculation video on what might’ve broke the Machine of Death, and this just got me thinking, of what was the exact event, that broke the Machine (assuming it hasn’t been broken for a long time, but now it just kinda tipped over a point).

I would actually guess the death of Argus, or Odyn’s deal to get access to the Shadowlands, those might’ve set the stage for all of this to happen.

We learn in Shadowlands that the problem is that the Arbiter herself is in some kind of stasis. The souls are streaming into the Maw because the Arbiter, the being who is supposed to judge all souls and decide where they belong, is currently incapable of doing her job — something is preventing her from acting.

The question becomes, what, if anything, that happened in Legion could have caused an entity that judges the destinies of the deceased from doing her job?

Yes, I’m talking Gul’dan. He died back in Warcraft 2, and then, there he was again, dying in Legion. Perhaps the simple fact that the exact same soul showed up again, even more evil this time, just broke the whole thing by getting the Arbiter confused about how this could even happen. Maybe she contacted the Jailer to demand answers about how the guy got out of the Maw and the Jailer used that moment to ambush her, perhaps with the first Gul’dan as one of his servants.

Heck, maybe both Gul’dans are now the Council of Gul’dans in the Jailer’s service.

LOOK, I KNOW ARTHONOS IS KIND OF ASKING ME THE SAME QUESTION UIYA DID, BUT THERE ARE TENTACLES OF CLOTTING BLOOD IN MY FIELD OF VISION SO JUST GO WITH IT

Q4tQ: What are your thoughts about the latest Warrior changes? Single minded fury is back! Ravager chases down the enemy and uses your equipped weapon model, and Deep Wounds got an interesting change too.

I already mentioned that I’m super happy about Single-Minded Fury, so instead I’ll talk about the other changes. I am, in generally, reasonably pleased. Let’s go over the basics.

Arms is switching around Deep Wounds to make it a debuff that increases the damage of your other strikes instead of a bleed DoT. I have no idea how that’s going to work out. I hope it works out and I do think that we’re looking at an overall change that’s going to alter the spec fairly significant, with abilities like Cleave becoming Deep Wounds spreaders, Execute being taken off of the Deep Wounds tip so that you’ll want to keep hitting Mortal Strike during the Execute period to keep Deep Wounds on your target, and the Ravager changes will make it more interesting to use and also the  lower cooldown will make it more likely to be worth using.

Fury is getting a pretty detailed redesign. SMF is great, even if I’m a TG for life kind of player. Several abilities and talents are removed with their effects either partially or completely baked into other talents — Furious Slash gone, replaced by Onslaught, for example — and the Recklessness change will make it a lot more likely you’ll get to hit a Rampage as soon as you pop Reck. Overall, I think Fury will be in a decent place in Shadowlands.

The only real Protection change of note is a good one — Ignore Pain will cap at 2x value, up from 1.3x value. Since Ignore Pain is available for all Warriors, that’s good for everybody.

I could write a lot more about this but I’m generally always leery of getting too into detail when we’re discussing an Alpha build — plenty of time for all these changes to be changed again in the future.

I’m listening to Clubbed to Death Kurayamino Mix from the Matrix soundtrack right now as I try and write this while (from my perspective) dodging enormous blood tendrils that sweep across my field of vision like a rain of blood snakes. I wanted you all to know how ridiculously cinematic this Queue has been to write.

ARULEAN ASKED THIS ONE AND I WAS INTERESTED IN ANSWERING IT

Are the Nerubians connected to Yogg-Saron the way the Qiraji are connected to C’thun? If they are, and, given that we have undead nerubians, could that mean that other old god minions can be raised as undead? If not, could you speak to where they came from? Thanks, Xunam, Death Knight, Nesingwary (US)

We do not know which Old God, specifically, the Aqir were created by. But we do know that the Aqir became the Nerubians, the Qiraji, and likely the Mantid as well. The Nerubians do not serve or worship the Old Gods the way the Mantid and Qireaji do, and so, they do not have the same relationship with the Old Gods that either of their sister races do, which may or may not explain why they can be raised as undead. We don’t actually know if they can be raised or not, to be honest. But they are related to the Qiraji and Mantid, despite having turned on the Old Gods and refusing to worship them.

Okay, that’s the Queue for today. I am now going to go sleep and hope the blood tapestries unfurling in my eye calm down some overnight.