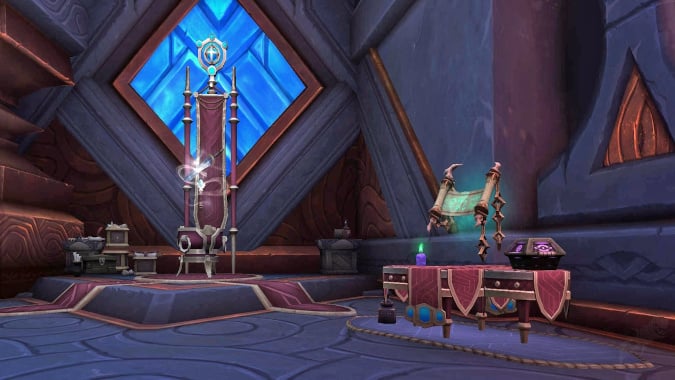 Since the dawn of the raiding scene in World of Warcraft it has been the same, one potion in combat. Combat was about to start, countdown timer, at one second before the pull, you would drink a potion, the cooldown would start, and your stats were up, giving you an edge at the start of a fight. Using a potion just before the fight meant you could use a second potion during the fight for another boost when you most needed the damage.

Pre-potting separated the casuals from the hardcore, but at a potentially high gold cost. A wipe early in the fight or a last moment decision not to pull meant that pricy potion was wasted. However, in Shadowlands this will change: you’ll be able to use potions multiple times in combat, but on a longer five-minute cooldown.

In this next build of the Shadowlands alpha, combat potions, such as primary stat potions and mana potions, now have a 5 minute cooldown. Additionally, they are no longer limited to one use per encounter. This is intended to make potion use less of a hassle, less expensive, and more decision-oriented in various situations throughout the game.

In raid encounters, players will still have the option of using a potion at the start of an encounter, but using a potion just prior to and as close to the pull as possible will no longer be required. Longer encounters will now offer up more than one moment to use a potion for maximum tactical advantage. Ending a raid boss encounter with a wipe or a win will reset the potion cooldown.

In dungeons, spacing out potion use will place more emphasis on deciding the most important times to use them.

At first glance, this could have some positive changes. In long fights, those taking more than ten minutes, players will be able to use potions as many as three times, which can result in some great DPS increases, or extra mana or health for those who need it. Conversely, this means fights will be designed with those uses in mind.

Players will be expected to have more potions in their bags and will need to perfectly time them to ensure maximum uses within the fight. This adds complexity to potion usage, from using potions on the pull andwhen Heroism/Bloodlust is used to using potions at several strategic times throughout the fight. This will put a different feel on Shadowlands raiding.

But the change looks to have more of an impact on Mythic+ dungeons. With the cooldown increased to five minutes and not affected by dropping out of combat, players will have fewer opportunities to use potions. That means fewer mana potions for healers so the group can keep moving. There will be fewer speed potions for tanks to quickly gather mobs — which particularly disadvantages tanks with less mobility. There will be fewer invisibility for groups to skip unnecessary trash. Potions are an essential tool to beat the clock, and this change gives Mythic+ players fewer opportunities to use them.

The change to world PVP is also a little disconcerting. Will this encourage certain players — Rogues — to hide in the shadows for five minutes at a time and leap out only when their potions are off cooldown, when they are at their full potential? Probably not, which would make this a nerf for PVP that keeps players from getting maximum burst in their opening move every time.

If this change is diversify potion use in raids, perhaps Blizzard could put primary stat potions and utility potions on separate cooldowns. Or perhaps cooldowns aren’t the same in all situations. For example, Wowhead has already confirmed that healthstones won’t share the five minute cooldown, so this doesn’t have to be a one-cooldown-affects-all situation. Testing and feedback on this change will be important.

One goal for Shadowlands was to make professions more relevant. More uses of potions in raids could help Herbalists and Alchemists alike — but considering how common potion use is now, they’re the professions least in need of a boost.

Blizzard Watch is made possible by people like you.
Please consider supporting our Patreon!
Filed Under: Mythic Plus, Potions, Raiding, Shadowlands, Shadowlands Alpha, Shadowlands Potions.
Advertisement