The Queue: To Evil!

He sacrificed other mages during the War of the Ancients. He willingly used the souls of others as fuel for a ritual when he was in Outland. He absolutely would have killed anyone if it had achieved his goals. He was and is an interesting character, and the fact that he was so utterly, ruthlessly pragmatic is part of why he’s interesting. Characters like Illidan make things happen.

W. H. BEARINGTON III, AVATAR OF UNQUENCHED RAGE WOULD LIKE TO TALK SEQUEL EXPANSIONS
If there were one expansion you’d could revisit in a sort of “sequel expansion,” what would that be, why, and what do you imagine the big plot points would be?

One could argue that every expansion after Mists of Pandaria was a sequel expansion of sorts — Warlords was a Burning Crusade sequel, Legion was a Warcraft 3 sequel (and kind of a BC sequel), and Shadowlands is a Wrath sequel, touching upon the characters and stories set up by that expansion. Battle for Azeroth feels like a Mists of Pandaria sequel. None of these feel directly like sequels in the way that, say, The Empire Strikes Back is a sequel to the original Star Wars, but they feel like sequels the way Endgame is a sequel to 2012’s Avengers.

So for me, the expansion I’d do a sequel to is Cataclysm. I’d use Shadowlands to bring Deathwing himself back from the dead, free of the Old Gods and furious at the fate the Titans let him suffer under all those years, and instead of just being a giant dragon kaiju I’d have ol’ Neltharion be out to restart the Dragonflights and restore his people with or without the help of the Titans and their power. A far more devious and political figure, and one you can’t just dismiss as insane or evil — the Dragonflights suffered and sacrificed for the Titans, and they got sterility and a slow decline as a reward?

Neltharion has a point, even if he’s ruthless in his pursuit, is what I would aim for.

Does it make sense for an arms or prot warrior to have a “rage” resource? Fury, totally, but arms especially seem to be the patient types, waiting for openings. Hard to do that when you’re full to the brim with anger.

Yeah, I’m pretty satisfied with the idea of an Arms or Prot Warrior using Rage. If you’ve ever seen a furious mom put herself in the path of something much bigger than herself to protect her kid, or a kid who looks like he’d crumble after one hit take blow after blow and keep standing there taking them, his eyes like flint, you’ve seen some of the very different ways that kind of anger can manifest.

Look at The Count of Monte Cristo. Edmund Dantes is angry. So, so very angry. But he turns that anger into meticulous planning for his revenge. Rage doesn’t have to lead you to a screaming, woad-painted explosion of attacks — the central premise of Batman is that his rage over the deaths of his parents leads him to study and prepare for years to become an instrument of vengeance, but he keeps his anger controlled — it serves him, he doesn’t serve it. There are many different ways to be in touch with that inner Rage, it doesn’t have to be just one way.

Just dinged level 50 in AC: Odyssey (max level) and not even finished with exploring Attika. XD
(Two more ‘sub-zones’ to go)
I have a feeling the game will go faster after I leave Athens, though.

Level 50 is not max level in AC: Odyssey. Level 99 is, and then you start Mastery levels. 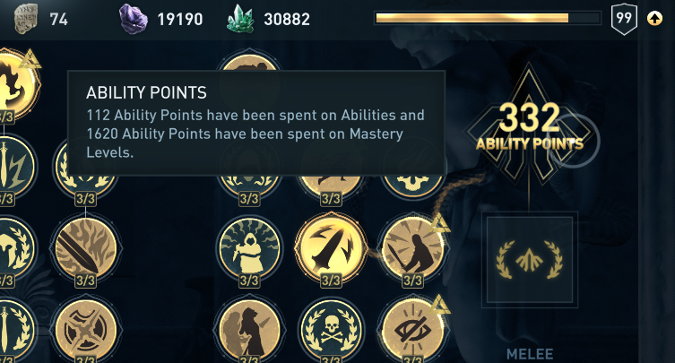 Once you spend 112 points on Abilities (every point you get from leveling from 1 to 99 and an additional 13 points) and 1620 points to reach rank 20 in every single Mastery Rank, for a grand total of 1633 Mastery Levels. As you can see, you can keep getting levels after that (I have 332 ability points I can’t spend, because I have every single thing I can possibly buy) but they don’t do anything past that point.

But 50 is definitely not max level.

FALRINN WANTS TO SPECULATE ABOUT SHADOWLANDS AND RELEASE DATES

QftQ: Given that it’s plausible, though certainly not guaranteed, that a release date announcement for Shadowlands will be forthcoming in next Wednesday’s livestream, I think it’s a good time to get in a serious prediction.

Personally I’m going to say November 10th. That would give Shadowlands a combined alpha/beta cycle of about a month longer then BfA had, and give enough time before Thanksgiving to get any major problems with the launch worked out.

I have no idea, but I feel like that’s a reasonable prediction. It keeps them from launching during the Christmas holiday, although with all the COVID fears and the current rate of infection in the United States who knows what’ll be going on with that by then? I don’t find anything I disagree with in particular in your prediction.

I feel like I’ve let you down. You come here expecting me to be a contrarian and here I am thinking you made a good prediction.

Do you think it would make sense for wow to add “specialist” classes? Ie, a layer on top of your regular class that you can earn that replaces some of your abilities. Ie a surgeon Assassin rogue becomes a healer, or a demolitionist surv hunter becomes a close range aoe bomber

I mean, it makes sense in that it is something a lot of other games (like D&D) have done over the years, I understand what you’re suggesting. Do I think it could, or should, happen?

No. It would add yet another level of complexity on top of a system that’s already too complex, would utterly rework role balance in World of Warcraft — either they spend the time and effort to make sure Surgeons are balanced healers or they don’t and then the Surgeon spec is either wildly OP or broken and not worth taking. It’s just so, so much added work to put these kinds of ideas in that I really don’t see it happening.

If WoW had instead gone with, say, six classes and added this kind of ‘specialist’ gameplay back in The Burning Crusade, I could see it working. 6 classes, 3 specs each for 18 total specs, then a specialist for each class that essentially makes their role switch could work. Does each Specialist work with every spec in a class, so you could have a Surgeon Assassin Rogue, Subtlety Rogue, or Outlaw Rogue? That bumps the complexity way up.

I really don’t see them doing something like this. Frankly a whole new class would be much, much simpler.

Okay, remember, I’m also doing tomorrow’s Queue. So ask me a ton of questions, please. It’ll make it a lot easier to write up considering I’ll be writing it during Canada Day, which is a holiday up here.

Blizzard Watch is made possible by people like you.
Please consider supporting our Patreon!
Filed Under: 99 Levels
Advertisement